State of the insurgency

I have completed two more compounds for Afghanistan.  The first is practically a fortress, and again from one of Matakishi's designs.  This one turned out to be quite a fortress.  It also raised a question in my mind about having too many two-storey buildings.  Of course there are plenty of two-storey buildings there, but the single storey buildings are more common, so I added another compound just to be sure that I wasn't overdoing it on the taller buildings. 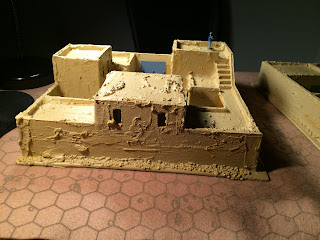 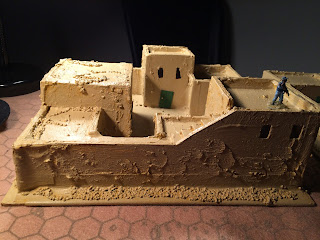 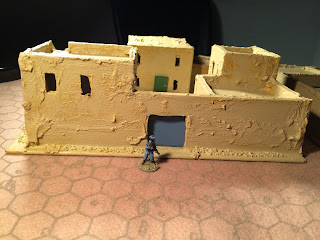 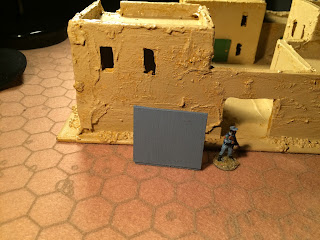 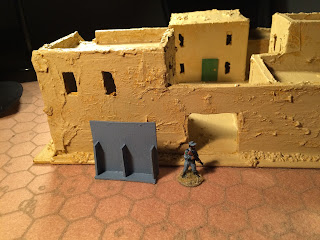 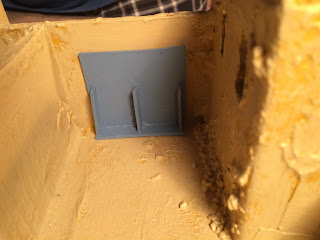 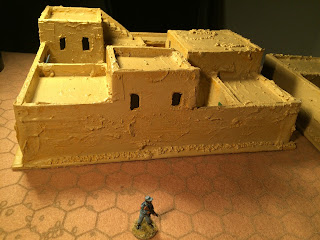 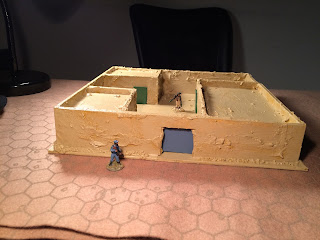 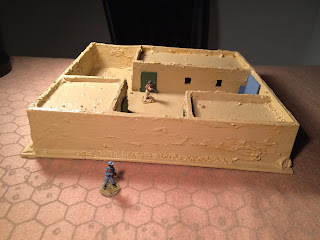 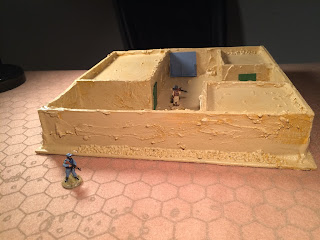 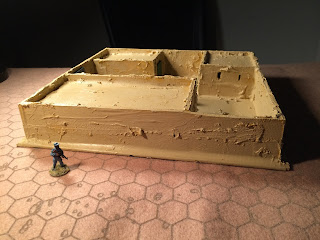 For these compounds, I adjusted my approach slightly from the first one that I did.  They are still made from foam core boards held in place by  combination of white glue and duct tape (you can certainly see the duct tape in a few of the photos!).  I slathered on some spackle before applying gesso and my standard two-layer paint (ochre yellow base with 'camel' dry brush).  I glued the building doors in place as with the first compound but decided that the main compound entrance needed a removable door, to make it easier to see when it is open.  Actions that could happen in a game like breaching the walls or troops occupying buildings will need to be represented with markers or some such, however.

I picked up a couple of Pegasus items, as well.  First up is a set of 6 brick wall sections.  Simple addition of spackle and paint and here they are, ready to put around a field or expand a compound.  Of course, now I have a few, I have decided that I need more - that's the problem with these projects, I end up a mini-megalomaniac. 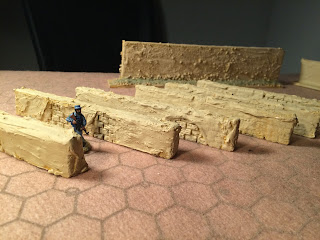 And here is a group shot of all the insurgents to date.  All are from Eureka, some with head swaps as previously discussed. 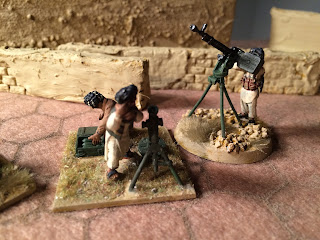 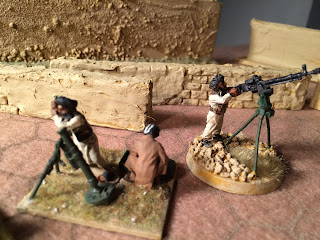 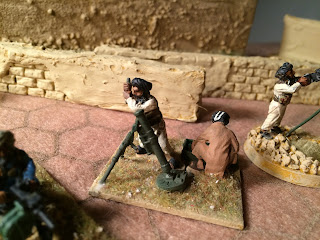 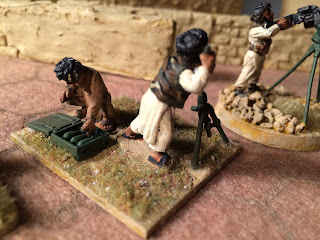 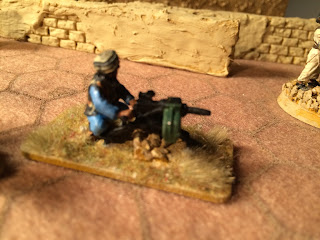 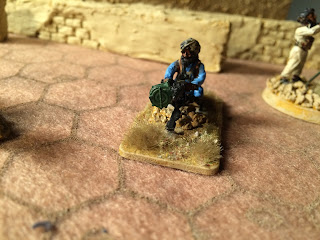 And a few closeups of the gang. 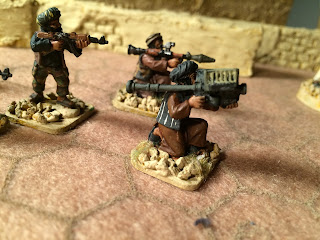 They even have a stinger! 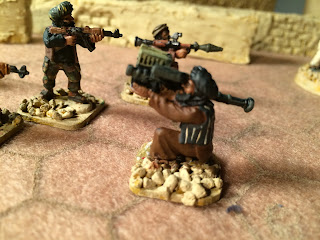 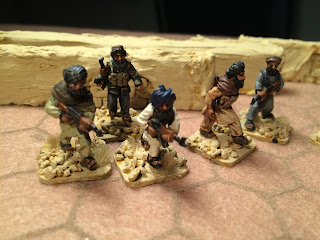 I'm also building up a bit of a herd of livestock!  The beasties with the larger bases are from the Pegasus farm animals set, the little sheep with square bases are from Warlord Games and the round base sheep are the now-defunct Mega Minis.  (too bad, as they're my favourites of this lot).  The Pegasus set also includes a small herd of cattle, several pigs and quite a few poultry that will be set aside for a future project. 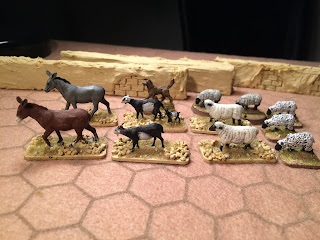 Here is a small collection of trees, to represent an orchard.  The ones on the left were sold as apple trees, but to me they screamed pomegranates, for which Kandahar is justly famous! 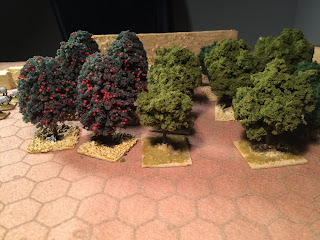 And lastly, my attempt at a poppy field.  Not quite working for me, especially the side view.  I'm going to keep playing with this, maybe I'll come up with a better idea. 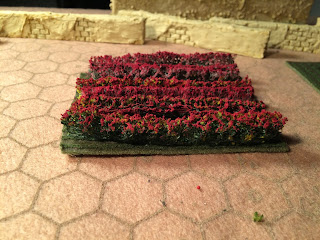 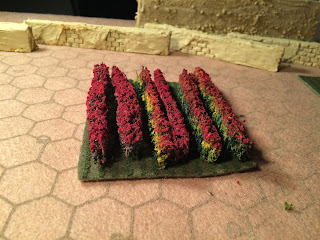 Posted by William Bailie at 21:10 No comments:

Here are a few shots of the finished taxi based on a Cars car.  I need to work on the reflections in the windscreen effects, and the front end is a bit mushy, but overall I'm content.  It looks the right size, more or less. 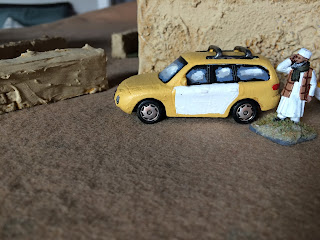 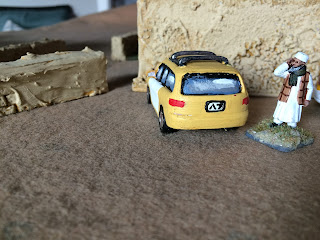 Here is a comparison shot with the 1:43 Mercedes die cast.  The roof of a passenger car should only come up to the shoulder of an adult, so the Cars car is about right (maybe a titch wee), while the Merc is a bit of a monster. 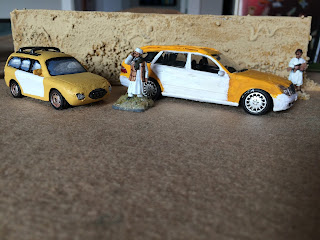 In the end, it's only going to be a terrain piece.  Although I suppose it could be something nasty like a VIED.  Hmmm.
Posted by William Bailie at 20:58 No comments: