Trees! (or now for something a bit different)

I took a break from painting miniatures this past week to make some terrain - not for wargaming, but for my sons' wooden railway.  We recently picked up two sets of the wooden railway from IKEA, and it's been a great hit with both kids.  I like particularly most wooden railways are mutually compatible, including IKEA, Thomas the Tank Engine, BRIO and Melissa and Doug.  This means that I can load up on track from IKEA or M&D, and save up for specialized items like bridges or buildings from BRIO or Thomas.

However, it is very difficult to find terrain other than buildings for any wooden railway.  I searched through many different catalogues, and could only find a handful of trees available, and only as part of a much larger set (I think one set was over $100, and included two trees along with a full set of tracks, trains, bridges and whatnot).  So I eventually figured out that if I wanted trees, I'd have to build them myself.

So I stopped by Michaels and picked up some cones (wooden doll bodies) and balls (dolls heads) plus a length of dowel and some wooden wheels. 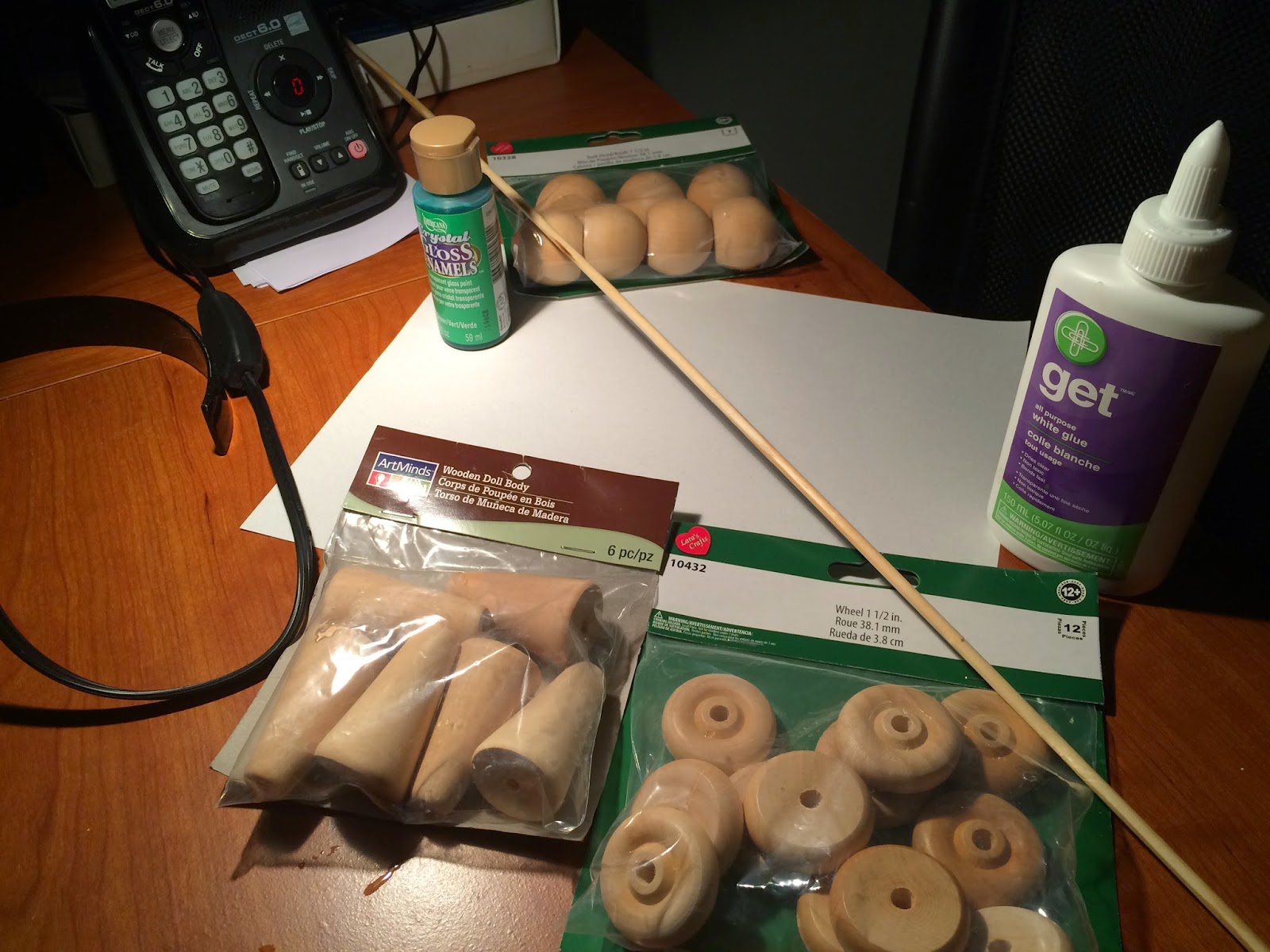 I then got to work cutting the dowel to the necessary length, and glued it in place.  The dowel I selected was a perfect fit for the cones and balls, but the holes in the wheels were just a little too big, so I needed to pack them with a bit of modelling putty to get a good fit. 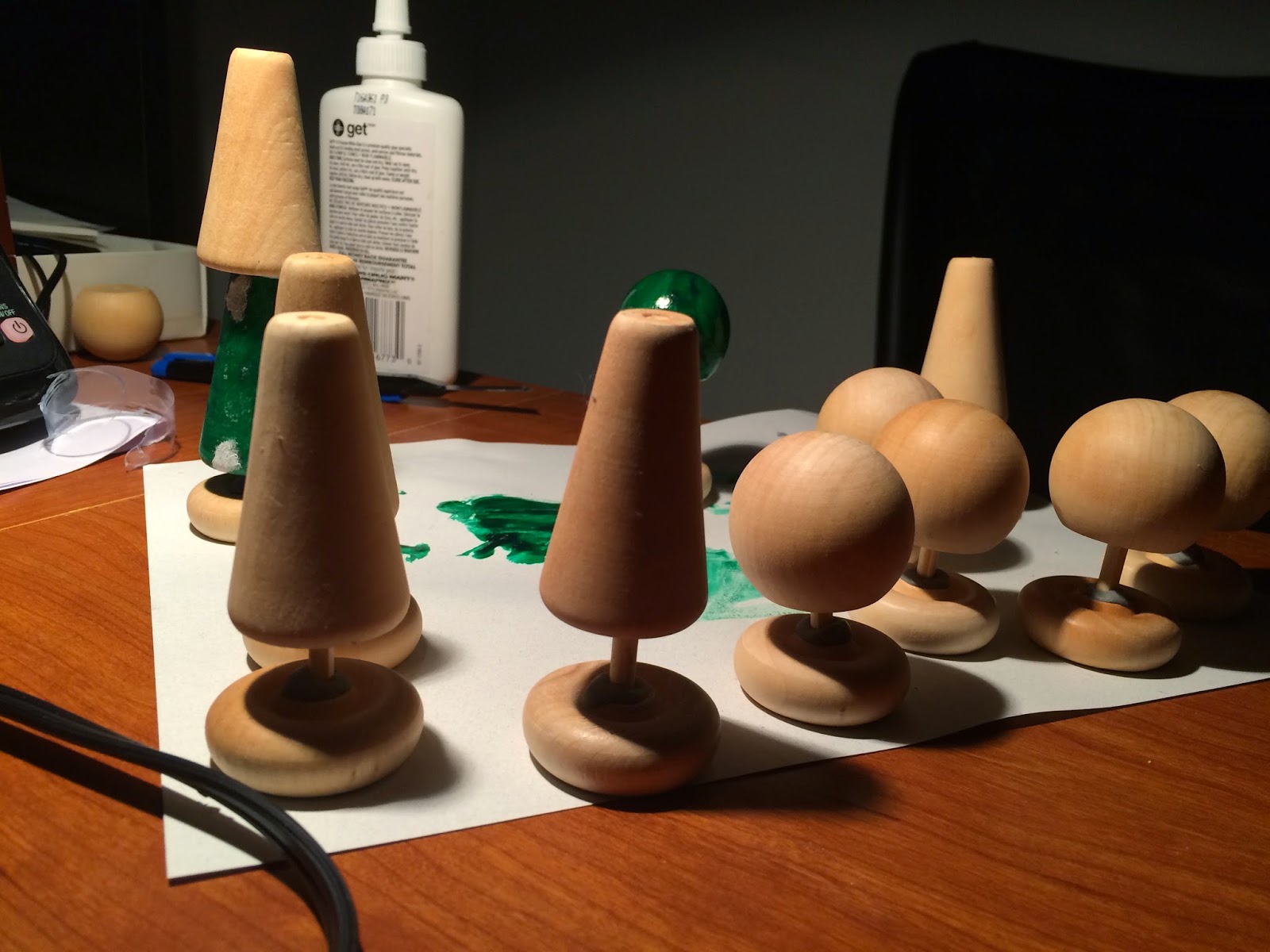 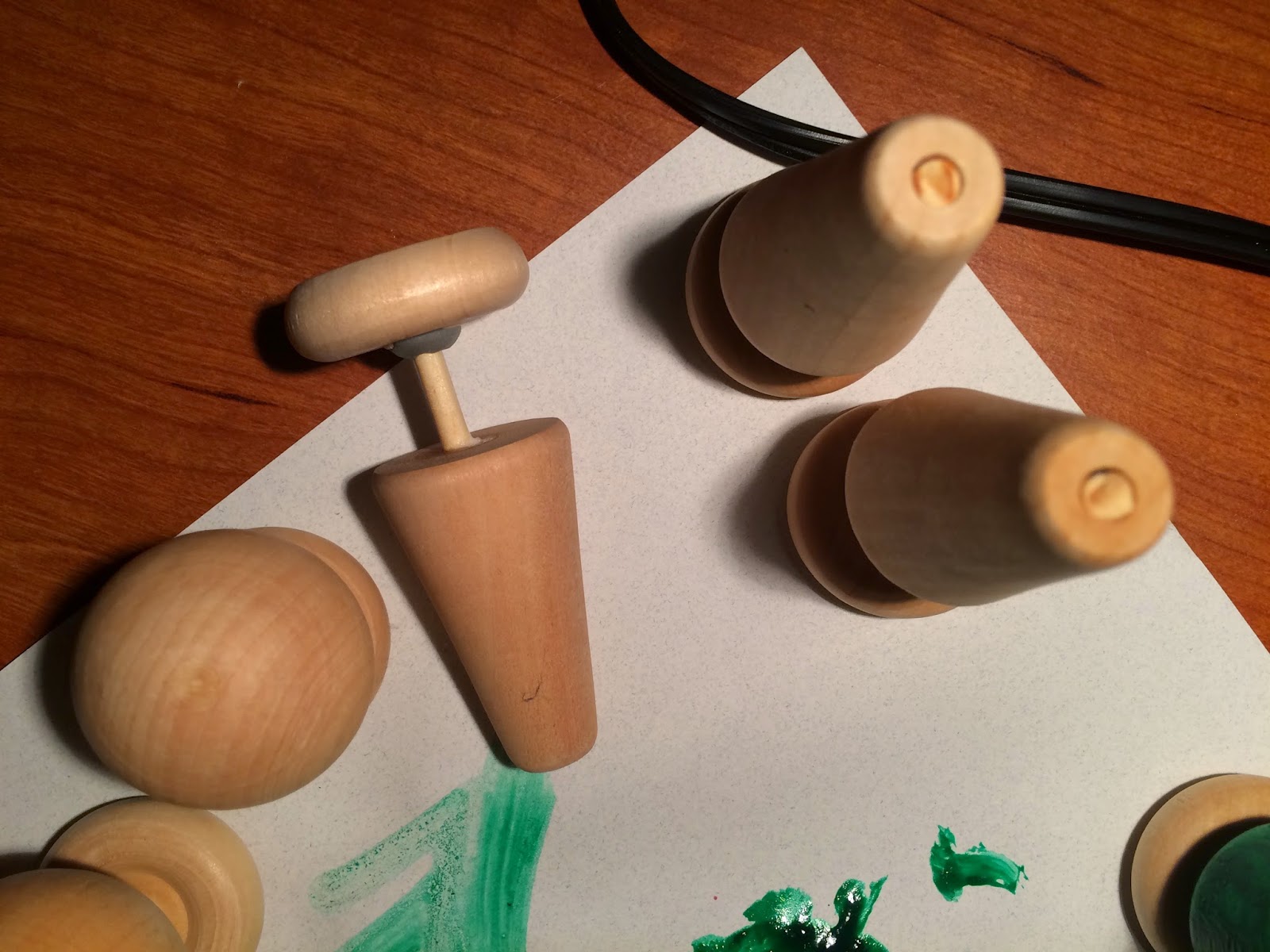 Once the glue dried and the putty set, I slapped on some paint (gloss green for the upper part and a flat brown for the trunk and base). 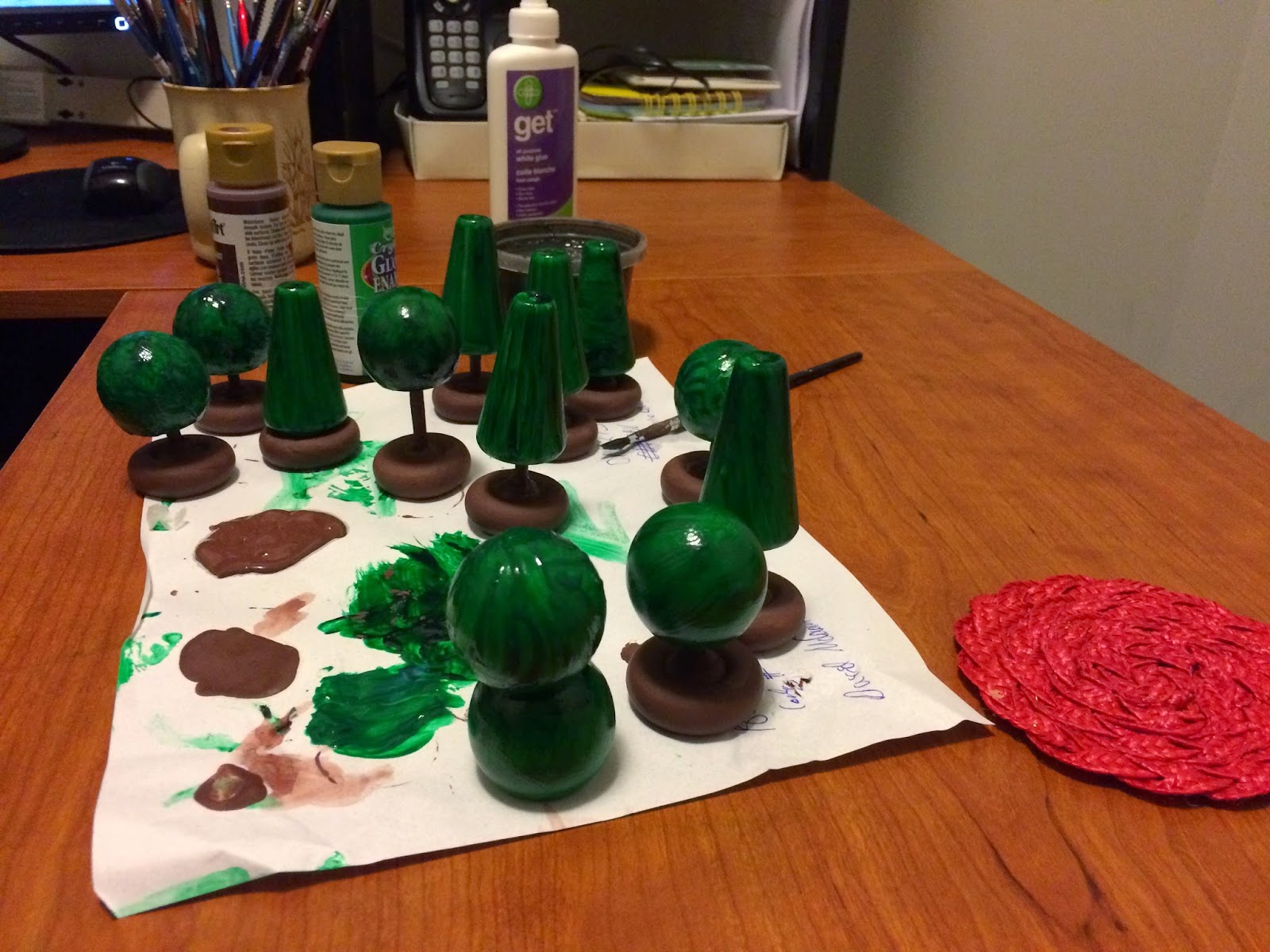 And here are the trees along with the IKEA train and tracks. 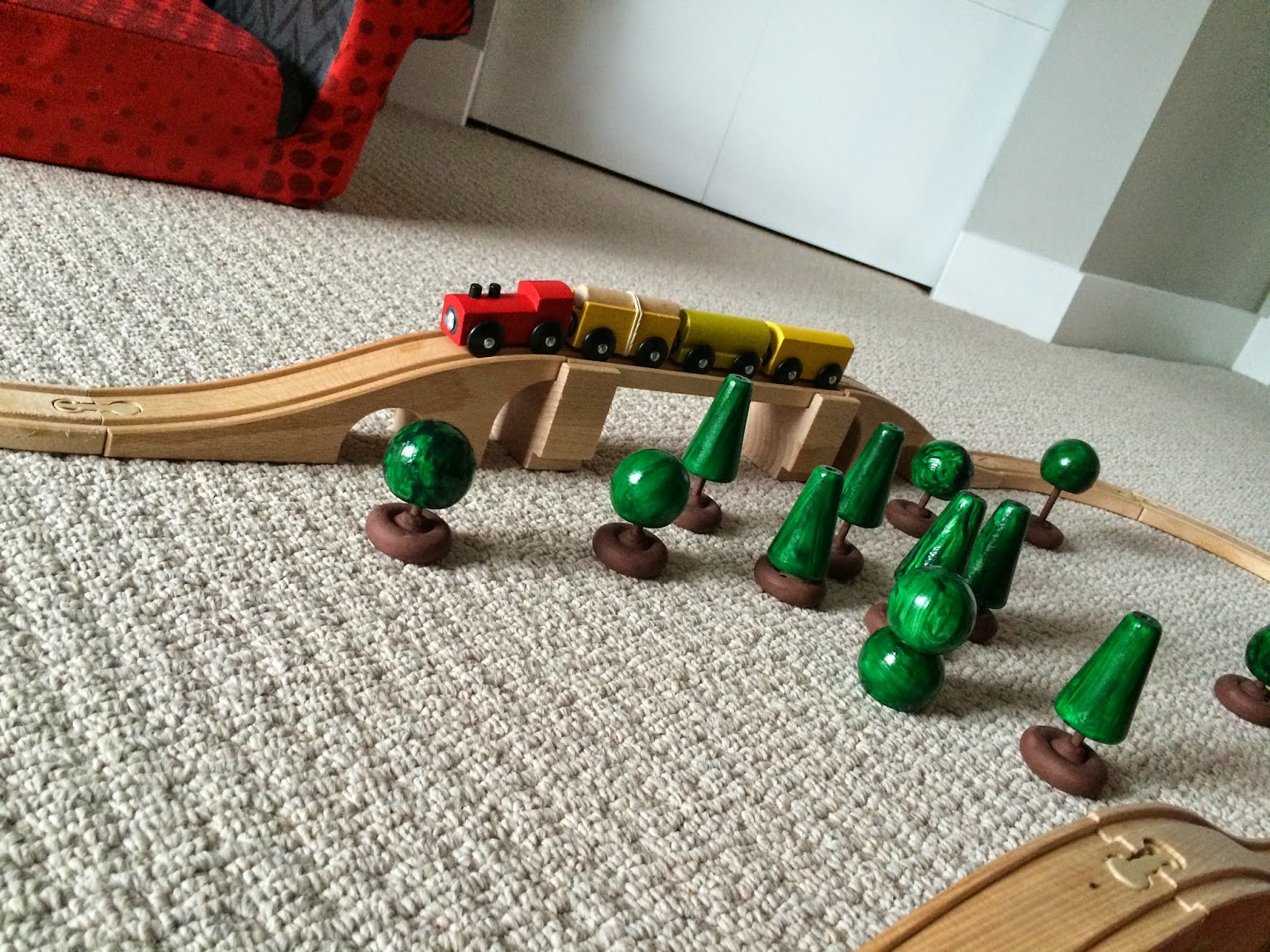 Nice and quick little terrain project.  Parts cost me around $25, and I still have lots of paint left over (and I could probably find a cheaper source for parts than Michaels, to boot).

Posted by William Bailie at 22:43 No comments:

Gunga Din and the Sergeants Three

Carrying on with my Pulp Figures booty from Trumpeter Salute, here are Gunga Din and the Sergeants Three.  I choose this set (rather than the 1930s one) as I can drop the three sergeants into my British army for the Second Anglo-Afghan War.  The Bob Murch figures are joined by a British Officer of the Great War era from Copplestone Castings.

Photos aren't great, and the painting is mediocre.  I guess they look ok at arm's length!

Posted by William Bailie at 21:25 No comments:

Continuing with the latest batch of Pulp Figures I mentioned in my last post, here is the Mad Guru plus some of his nearest and dearest friends.  They've been joined by an Old Glory Pathan Warrior, one of 30-odd that have been sitting in the lead pile for the past several years. 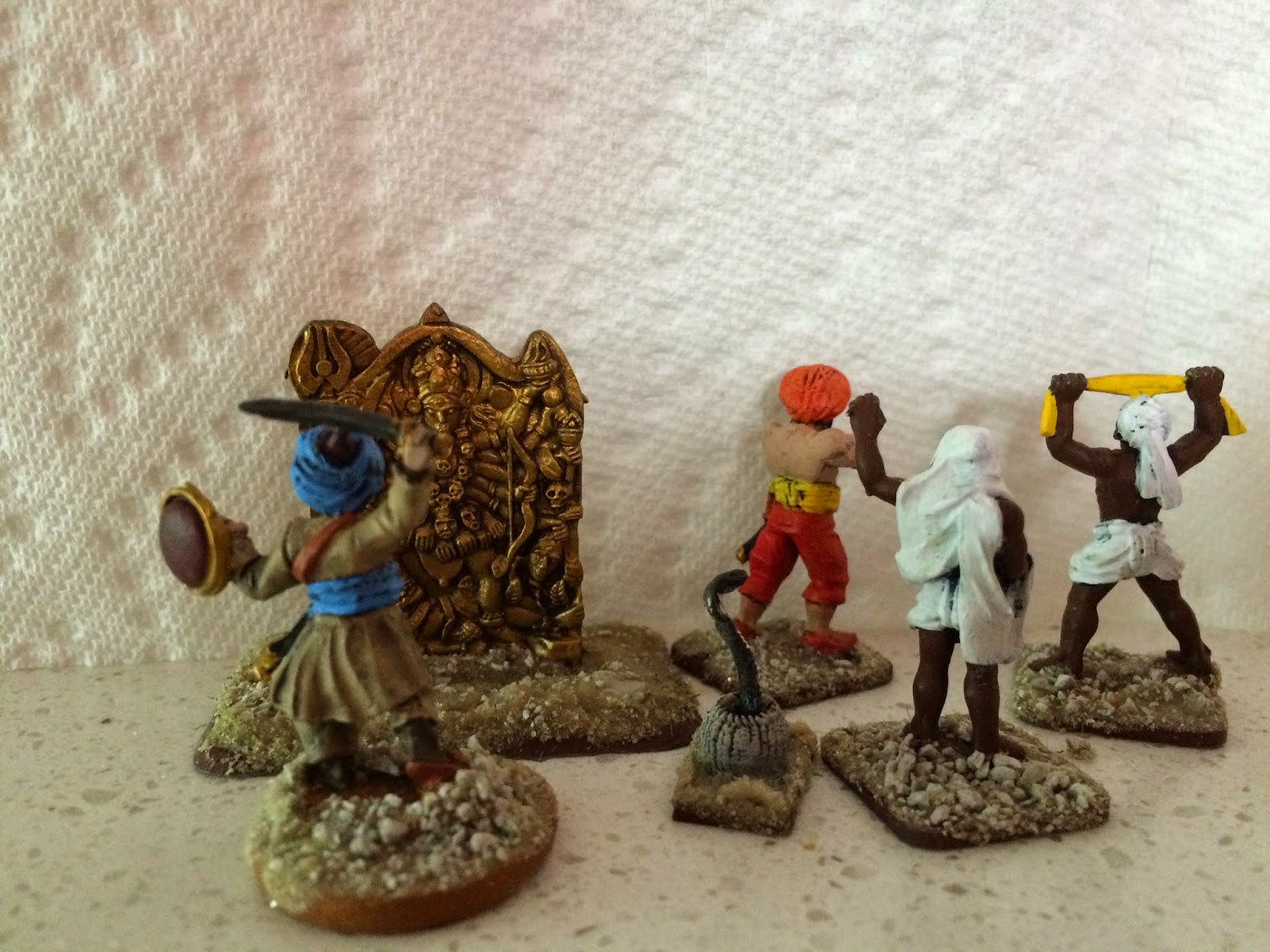 Posted by William Bailie at 16:00 No comments:

The move is done, and we are, for the most part, settled into our new home in North Vancouver.  I can now find a moment here and there to swing a paintbrush again!  Whoo-hoo!

Last week, I even managed a brief visit to Trumpeter Salute in Burnaby.  Erik and I were there for about an hour - no gaming, but I saw a couple of familiar faces from Victoria (hi, Brian and Bruce!), and got to meet the famous Bob Murch.

First up is a settler's cabin from 4Ground.  This is my first piece of laser cut MDF terrain, but it won't be my last.  The kit went together like a charm, no painting needed, just a bit of white glue and the building is table ready! 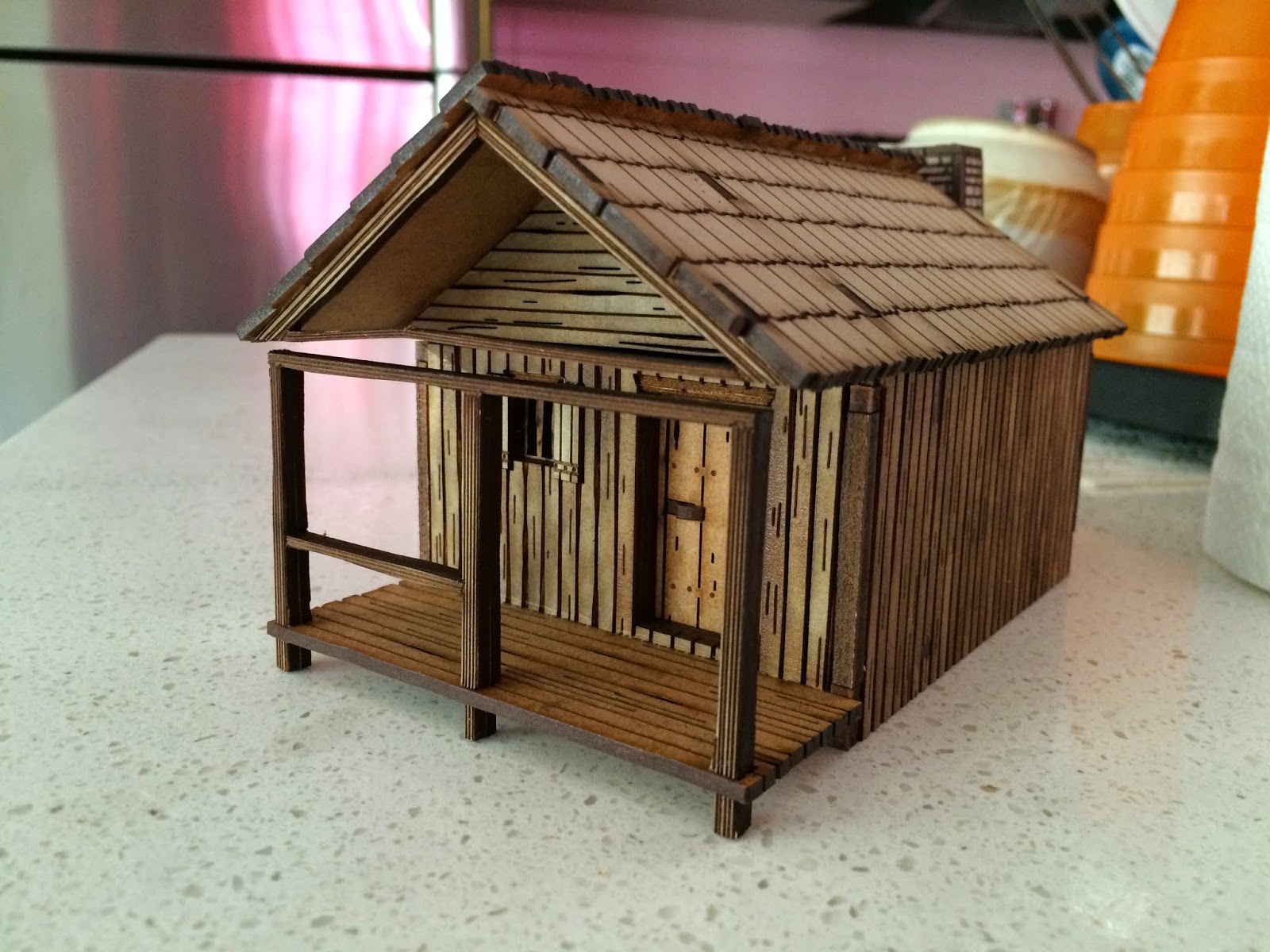 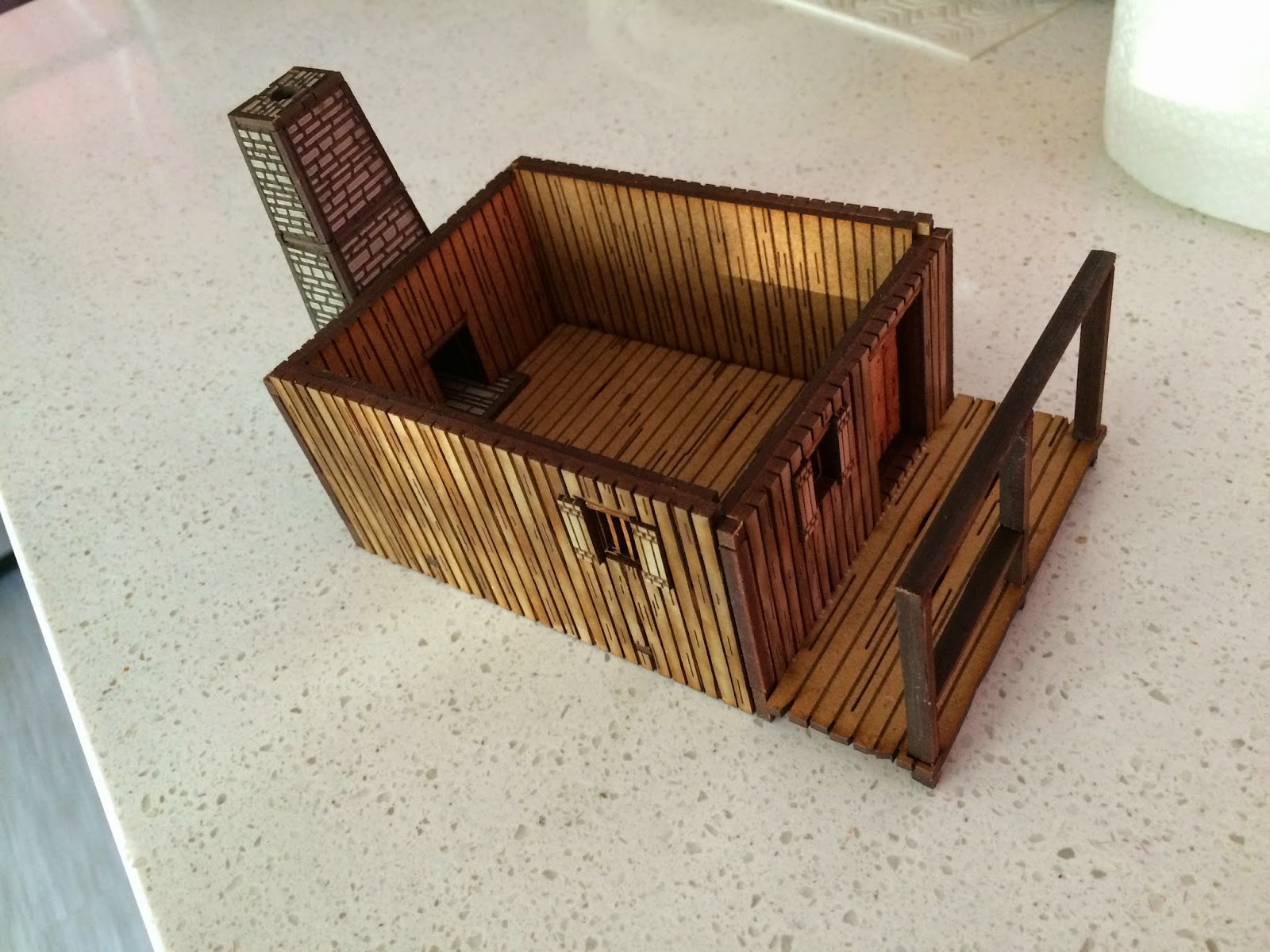 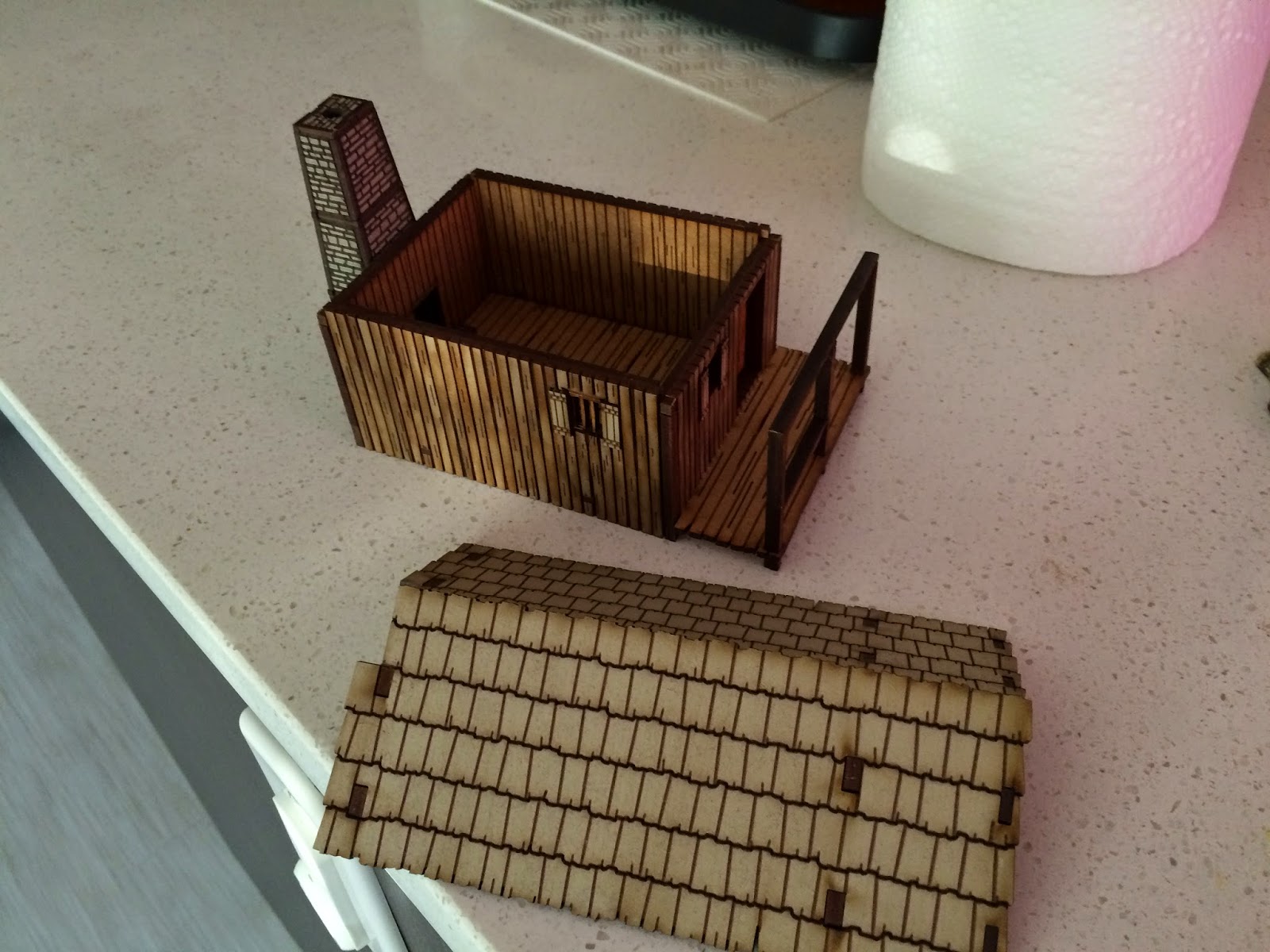 Amongst the several packs of Murchly Pulp goodness I picked up 'The Scarlet Patrol'.  I'd only intended to get 4 packs, then Bob mentioned the 6 for 5 deal, and then there was the breadfruit goddess, and then, well, you know...

Anyway, back to the Scarlet Riders.  I decided that I didn't want to have bolt-action rifles in my Wild West games, so I only painted the chap with the revolver and the one with the Winchester as mounties.  The others, for fun, I've done as Canadian cavalry, representing Strathcona's Horse in South Africa, the 19th Alberta Dragoons ca. 1912 and Canadian cavalry in the CEF prior to heading to the trenches in 1915.  For this period, the main distinguishing feature of the Canadian cavalry was the Stetson hat that we now associate with the RCMP.  These guys aren't quite right for the role I've assigned - none of them have bandoliers, for example - but are close enough for my purposes. 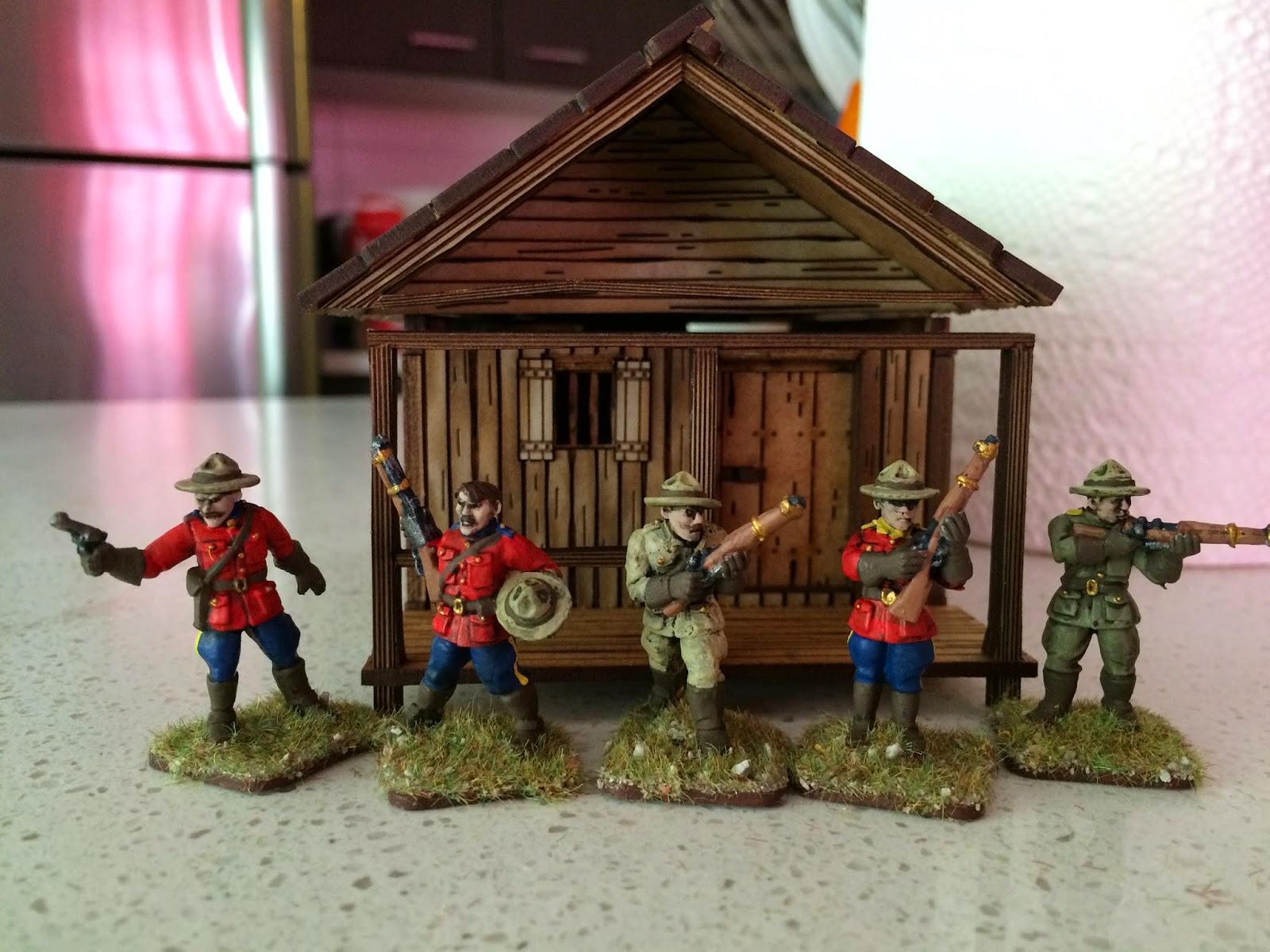 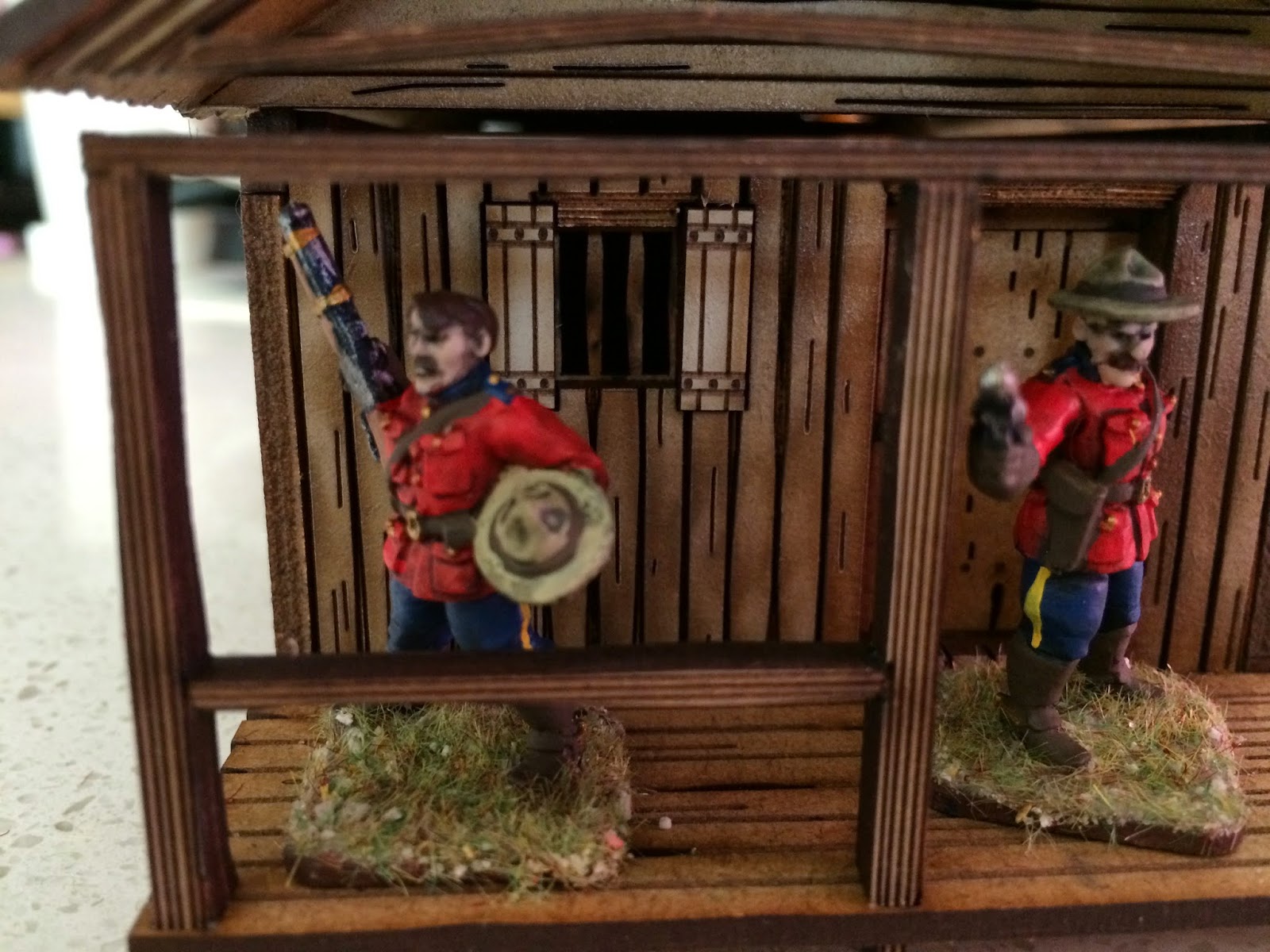 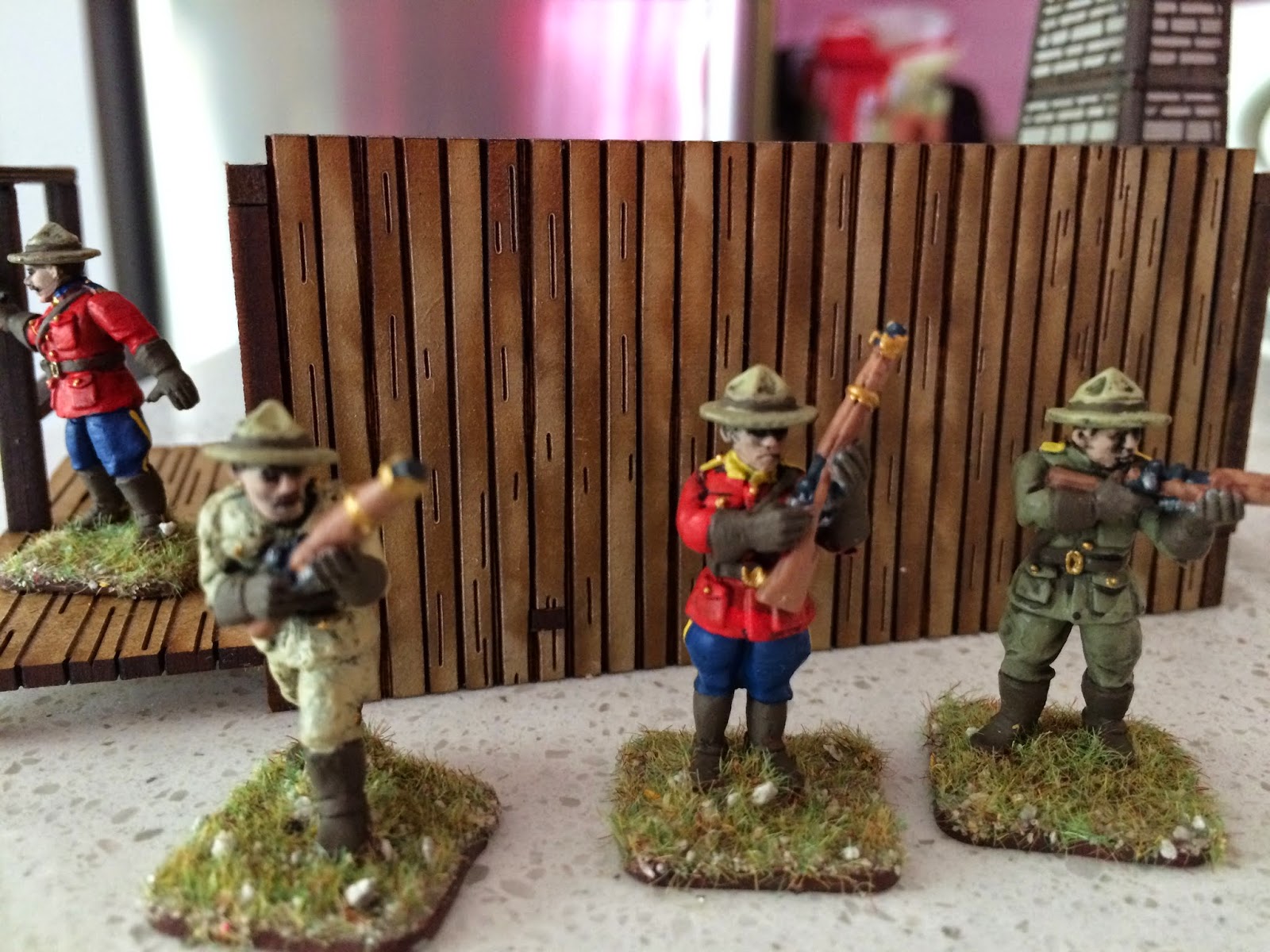 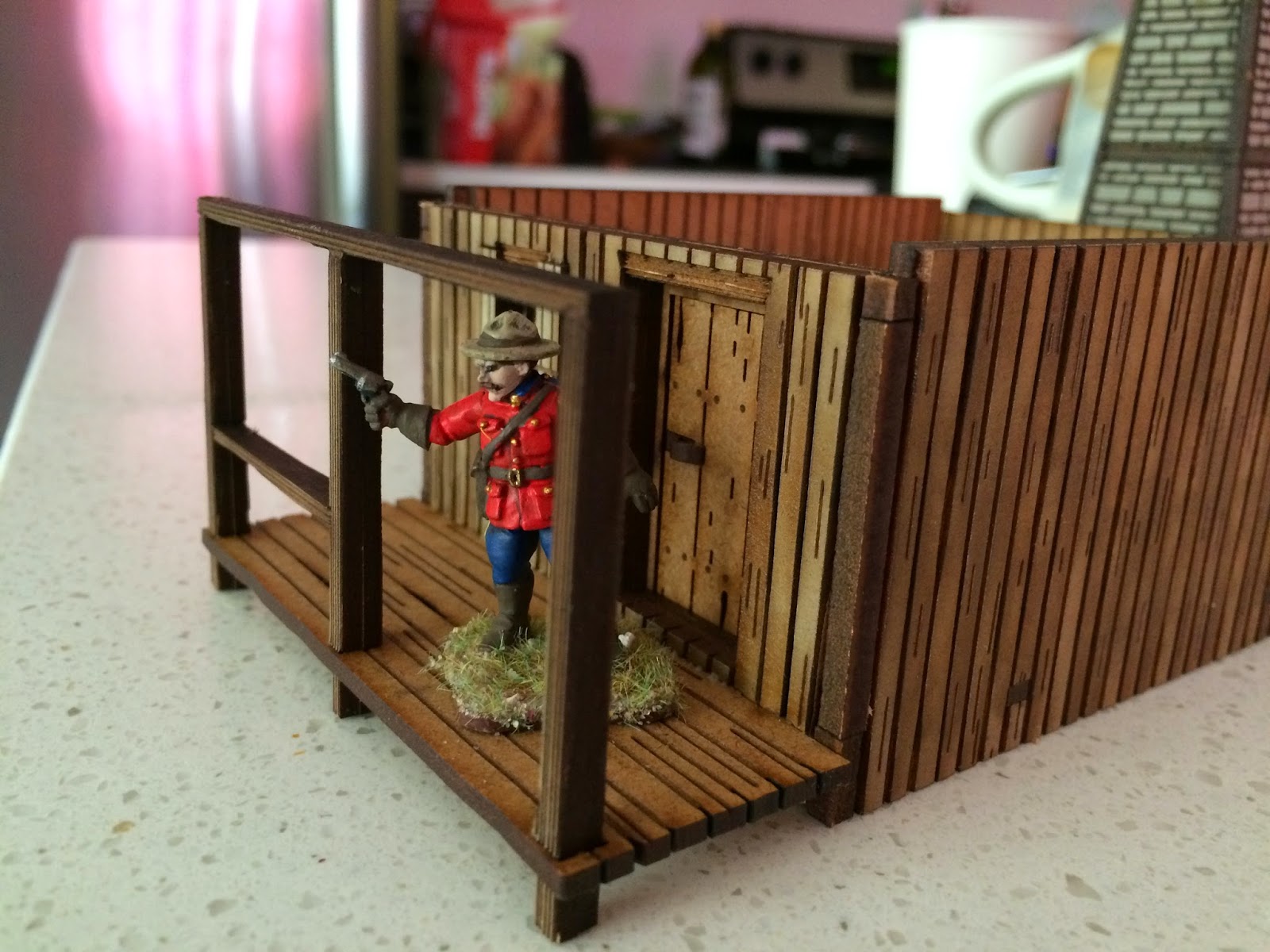 Hopefully I'll be able to update this blog on a slightly more frequent basis now, but you can never tell when you've got two toddlers as a permanent distraction!

Posted by William Bailie at 08:42 No comments: