Here is the result of a quick and easy terrain project.  Given a chance, soldiers will enhance their defensive positions any way they can, and installing barbed wire is a fast and easy way to slow an attacker.  These four little emplacements are each 2" x 6", and can be easily dropped onto the game table.  The base is cork board, which unfortunately warped a bit when painted, along with toothpicks for posts and what I believe is called 'sealing wire' by industry users, except that I paid far more than its worth because it was repackaged as 'battlefield razorwire' for 28mm gaming. 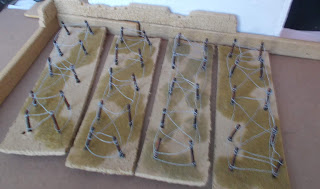 I'll take another go at these over the weekend to see if I can reduce the warping.
Posted by William Bailie at 20:20 2 comments:

I've moved on to the next stage of my Operation Husky project:  opposition forces to face the Hasty Ps.  I decided to start with a Fallschirmjäger Zug (or platoon).  1st Canadian Division faced fallschirmjäger of the German 3rd Parachute Regiment in several engagements on Sicily during Operation Husky, although as my appreciation of the campaign is growing, I might have been better off collecting Panzergrenadiers.  I didn't appreciate at first that the Hermann Göring Division didn't wear fallschirmjäger uniforms.  At any rate, these troops will be excellent opponents for my Canadians.

Here they are so far.

The zug is a little under strength.  There should be 3 squads of 12 men each, with 2 MG teams, at least according to the Chain of Command army list that I found!  Don't worry, reinforcements are on the way.  These are from Perry Miniatures.

There are some support weapon teams, including a tripod-mounted MG42. 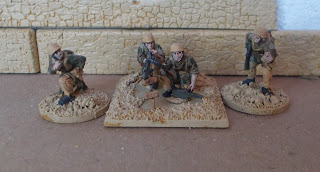 The two "extra" crew have their role painted on their bases.

In addition, the zug has access to some other support, including an anti-tank rifle team, a 50mm mortar team and a sniper team.

Here are the 1st, 2nd and 3rd Squads.  Under-strength, as mentioned, but not for too long! 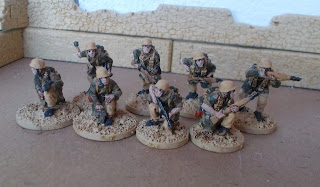 One of the radio operators is identified as a 'FOO', or 'forward observation officer' for the artillery, in case the fallschirmjäger commander chooses an off-table artillery support.  The sniper's spotter (with the binoculars) can work with the radio man in this case, assuming that the sniper isn't being used.


Posted by William Bailie at 20:11 No comments:

Can't see the forest until you have trees!

Christmas is coming, or so it would seem based on what I see in the shops.  I picked up a bag of 21 snow-covered evergreen trees from Michaels, plus a tube of green paint. 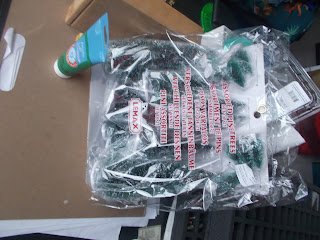 I don't do much winter gaming, so a small forest of trees with white frosting and white bases are going to look out of place when the rest of the scene has green grass and a very noticeable lack of snow.  So I dry-brushed green paint on the trees, painted the bases brown and added some static grass, and voilà, trees for my wargaming table! 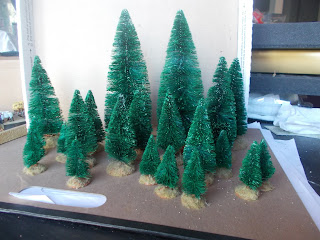 You can still see some white peaking through the branches,but I'm not too fussed about that.  A quick and dirty project has given me a big boost to my supply of terrain.

Posted by William Bailie at 18:58 No comments:

Email ThisBlogThis!Share to TwitterShare to FacebookShare to Pinterest
Labels: Terrain

The Hastings and Prince Edward Regiment now has some transport.  Theoretically, each platoon in an infantry battalion had a 15 cwt CMP truck assigned (15 hundredweight, approximately 3/4 ton).  In Sicily, there was a great shortage of vehicles, as the ship carrying most of the 1st Division's vehicles was torpedoed en route.  As a result, soldiers were required to walk everywhere and carry everything they needed.  Even if they'd had the truck, however, they'd still need to walk, as it was far too small to carry more than a few soldiers and was really intended to haul equipment and supplies.

I've decided to be a bit more optimistic, and I've provided the Hasty Ps with their very own CMP 15 cwt truck!  The model is from Rubicon Models, and a sweet little model it is.  My research on camo patterns for Sicily was not very successful - I found loads of information for trucks in NW Europe, some for the North African campaign, but precious little for any other theatres.  So I've improvised and assumed a bit, and followed inspiration from my previous efforts with the Sherman III, also a Rubicon kit. 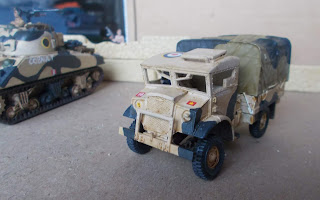 Vehicle markings are from the decal sheet that comes with the kit.  The red square with yellow maple leaf is the formation sign for 1st Canadian Infantry Division, the red square with '56' is the unit sign for the Hastings and Prince Edward Regiment (second battalion in the senior infantry brigade).  There's also a yellow bridging disk.  The sheet didn't actually have a '56' unit sign, so I built one by chopping up two other signs and sticking them together! 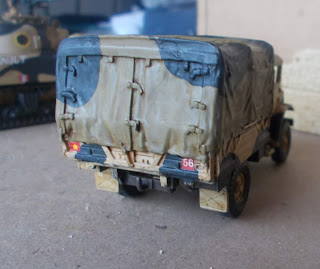 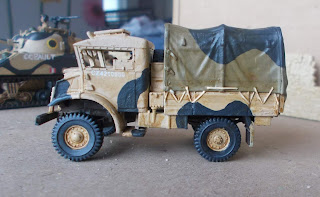 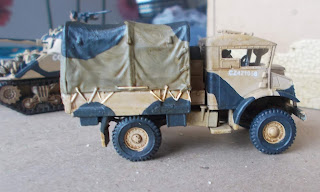 Finally, a few comparison shots with the Sherman III and the platoon commander. 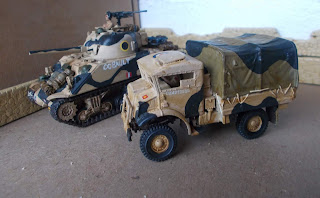 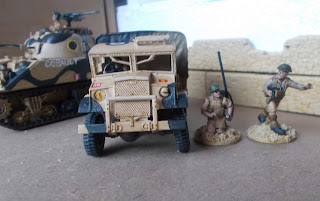 During the Second World War, nurses followed the Canadian Army, tended the wounded in hospitals, Casualty Clearing Units, Field Surgical Units, and Field Dressing Units.  These were generally behind the lines, so it's not really accurate to have this particular join my platoon of Hasty Ps, but I have the model, and so here she is.

She is from Bad Squiddo Miniatures, and should probably be dressed in woolen battledress, but since I've assigned her to Operation Husky, I've painted her in KD (khaki drill).  As a result, the cut of the uniform isn't exactly correct.  She should likely have a cotton skirt rather than trousers (although trousers are much more practical), and the jacket with shirt and tie is a bit too much to wear in Sicily in the heat of August! 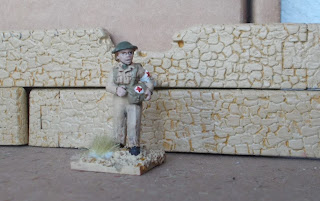 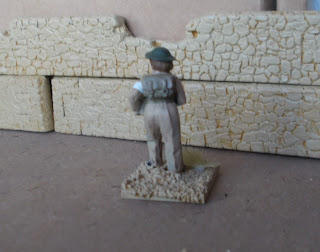 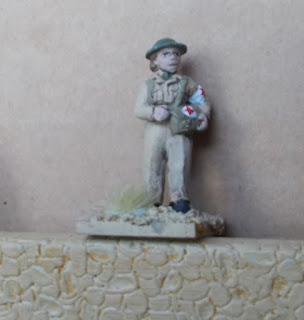 Here are the remaining members of my platoon from the Hastings and Prince Edward Regiment - 3 Section and the platoon HQ section.

One of the soldiers has a No.68 anti-tank grenade.  I don't know if he'll ever get a chance to use that or if he will simple be another rifleman.  Time will tell, depending on which rule set I end up using and how detailed I want to get! 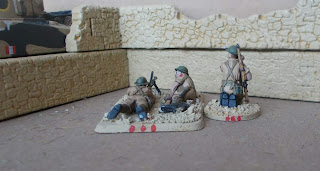 The gunner and loader are sharing a base - hopefully won't cause any trouble when it comes time to remove casualties.  If it does, then I'll have to use a marker.

Platoon HQ is almost finished - I still need to conjure up a PIAT from somewhere!

Here's the brave platoon commander, a 2nd Lieutenant, with the radio operator.  I'm quite pleased with the tiny little pip on his shoulder!  He's stuck at 2nd Lt, as adding another pip to make him a full Lt was too risky - I didn't want to mess up the painting! 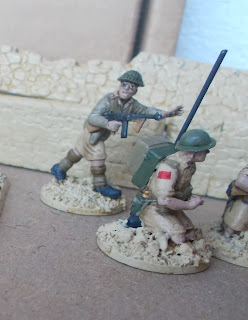 Perry Miniatures will make one sooner or later, or I could find or scratch build one and add it to a figure.  When the PIAT gunner finally shows up, the ammo carrier for the 2" mortar will become the assistant for the PIAT. 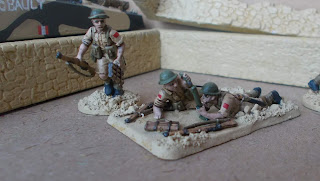 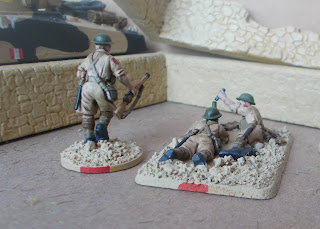 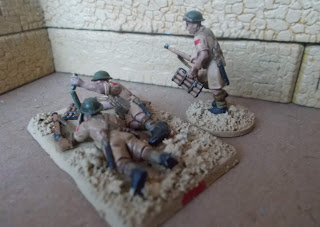 Finally, here's a group shot of the Canadian forces to date.  Bless 'em all! 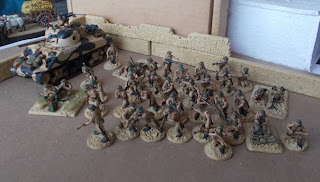 In "And No Birds Sang", Farley Mowat tells the story of the Hasty P's 'first and last bayonet charge in a war in which the bayonet was an almost total anachronism.'  In their very first action, moments after landing on Sicily (on the wrong beach, btw), Mowat was given an order to take a house from which enemy fire had been coming.  After fixing bayonets and ordering a charge, Mowat discovered why his platoon had escaped being slaughtered:  the buildings had just before been assaulted from the rear by Royal Marine Commandos.  As the Hasty P's sorted themselves out, the Commandos mocked them: "Cor, you chaps did look loverly!  Just like the Light Brigade.  Never seen nothin' like it 'cept in that flick with Errol Flynn!"

For 2 Section, I decided that it would be fun to have a section with fixed bayonets, even though they barely saw any use at all.  But bayonets are an option with the Perry Desert Rats, so I enjoyed myself fitting tiny bayonets onto these figures.  So here in all their glory is 2 Section, ready to take the fight to Jerry!

The rifle group, led by the corporal with the Tommy gun.

Two red dots on the rear of the bases for 2 Section!

The Bren group, led by the lance jack. 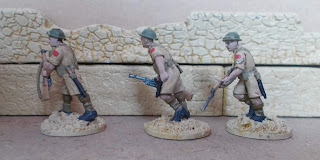 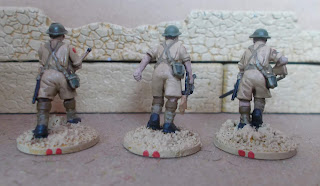 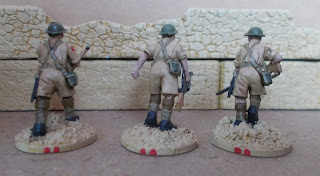 Posted by William Bailie at 14:41 No comments: