Last week I posted a report on COBOURG, a Sherman III in service with the Three Rivers Regiment in Operation Husky, the Allied invasion of Sicily in 1943.  This week, I'm moving on to the infantry, starting with the Saskatoon Light Infantry (M.G.).

There are some really great resources on the interwebs about the Canadian Army in WWII, as well as on specific units.  I have found Mike Dorosh's canadiansoldiers.com to be a particularly excellent source of information on just about everything to do with Canadian Army in the 20th Century, but especially for WWII.  For this post, the Saskatoon Light Infantry website was also very helpful.  I've been looking at books (yes, those old-fashioned things, with sheets of paper bound up to make reading much easier), including Daniel Dancocks' D-Day Dodgers, Farley Mowat's The Regiment and Tim Cook's The Necessary War.

In WWII, the Canadian Army (as with British Army and other Commonwealth armies) assigned Bren light machine guns down to squad level in the infantry platoons, but kept Vickers medium machine guns under the control of separate machine gun battalions.  So, while I've not yet decided which of the 9 infantry battalions of 1st Canadian Division my platoon will represent, this Vickers gun team is from the 1st Division's support battalion, the Saskatoon Light Infantry. 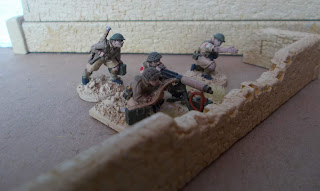 To be honest, I'm being a bit facetious about individual infantry regiments.  I've figured out that I'm not going to attempt painting the shoulder titles as they are far too wee for my painting skills :^P  I'm going to content myself with the rectangular red patch of the 1st Division. 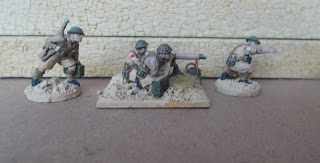 I'm very pleased with this MMG set from Perry Miniatures Desert Rats collection.  I feel I'm off to a great start for this little army, and I'm going to have fun working my way through the rest of the force! 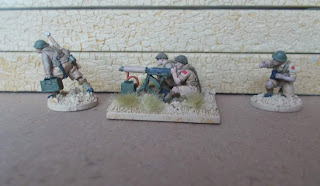 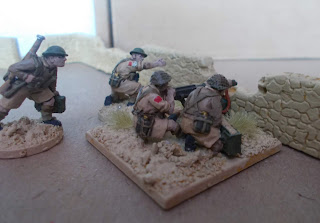