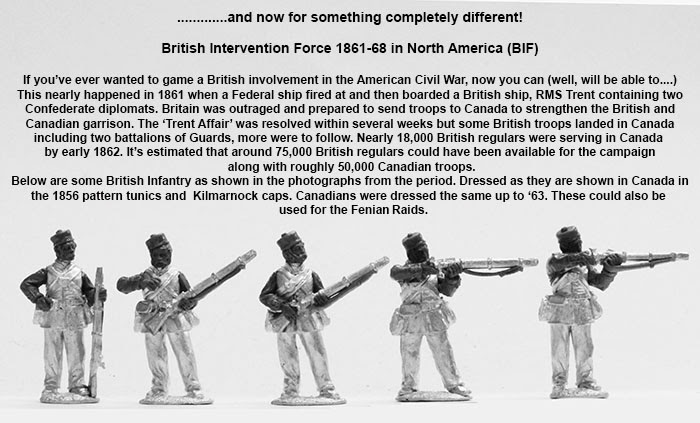 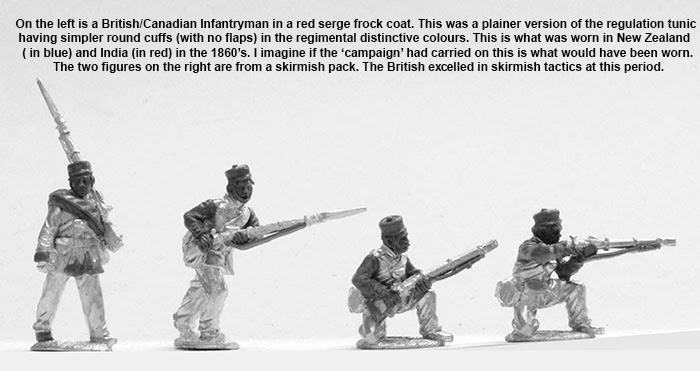 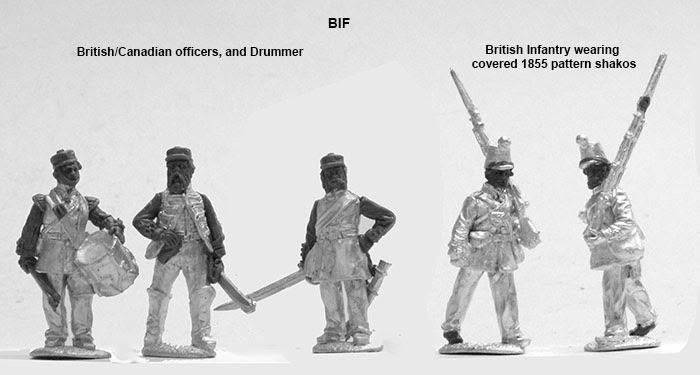 I am going to share some ideas I have for an alternate North America for wargaming.

My point of diversion from history as we know it is during the Trent Affair.  Rather than sending an expeditionary force to support the Confederacy (which would have enraged a significant portion of the British public, especially those opposed to slavery, but also those making a great deal of money selling arms to the Union), the British decided to take action to preserve 'freedom of the seas' and "freedom of trade'.  Wielding these banners, the Royal Navy, lead by HMS Warrior and HMS Black Prince, forced the USN blockade and opened the ports of the Confederacy.  Once Robert E Lee's army was assured a reliable supply of boots, rifles and ammunition, the Confederacy became strong enough to force a stalemate with the Union.

As a result of the RN intervention, the Confederacy managed to achieve recognition from the Union and the map of North America was redrawn.

The state of affairs now has the United States of America in an armed standoff on multiple borders - to the south with the Confederate States of America, to the north with the new Dominion of Canada (which, while now self-governing, is still part of the British Empire) and to the west with various Indian tribes.  And in the extreme north-west, there is an armed standoff on San Juan Island in the Strait of Juan de Fuca, ongoing since a pig was shot in 1859.

The Confederacy is deep in debt to British and French bankers, struggling to pay for weapons and other materials provided during the War of the Secession.  Economies are hard to find, as the CSA must keep a standing army to protect against potential aggression from the USA.  And the border to the south must also be guarded, as Mexico is in chaos.

In Mexico, Emperor Maximilian is being kept on his throne by a combination of French and Austro-Hungarian soldiers against a popular uprising led by Benito Juarez (and supported by the USA).

Other forces present in North America include:

Alaska is still part of the Russian Empire, and the Tsar has stationed elements of his army to protect his interests there.  The Great Game has taught the Russians to be cautious of the British, and the Russians in Alaska face both the Royal Navy and the British mercantile interests of the Hudsons Bay Company.

In the Canadian North West, Louis Riel leads a provisional government of Metis seeking recognition from the new Dominion of Canada.  With support from Francophone Canadians (and an enthusiastic group of Zouves Pontificaux) and the Fenians, the Metis are getting ready to face an expeditionary force of Canadian militia led by Garnet Wolseley.

The Irish Republican Brotherhood and the Fenian Brotherhood are dedicated to the overthrow of the British Empire.  Based in the USA, and sometimes receiving tacit support, they launch attacks against the British in Canada.  They have provided a battalion of Civil War veterans to support the Metis at the Red River Colony.

The Church of Jesus Christ of Latter Day Saints has set up an independent nation in Utah Territory, named Deseret.  The USA cannot tolerate this challenge within their territory and is preparing to use military force to bring the Mormons back into the fold.

It's getting late, so I'll stop there for now.
Posted by William Bailie at 23:12 No comments:

Musing on the Great War

This post isn't really about wargaming.  I'm currently reading 'The War that Ended Peace', by Margaret McMillan.  It's well-written and has gotten me thinking about the Great War, and how it was a real watershed between the world before and the world since - in many ways, there was more profound change in the world as a result of the Great War than from its much bloodier sequel.  This is a generalisation of course, as many of these trends were noticeable before the war, and in some cases the changes took years or even decades after the war to achieve.  But in general, the world before and after the war was profoundly changed.

In politics, the Great War marks the boundary between a time when Europe was the undisputed master of creation to a time when the world outside of Europe demanded attention.  Most noticeably, the USA was a regional player before the war (despite what they wanted the rest of the world to see), but after the war there was no denying the impact of American industrial, military and diplomatic power on the world stage.  Additionally, for the British Empire, the Dominions (and to a lesser extent the Colonies) claimed roles for themselves distinct from the Mother Country - the Canadians through the Canadian Corps and its victories at Vimy, Passchendale and the 100 Days, the Australians and New Zealanders at Gallipoli and also during the 100 Days, the Newfoundlanders at the Somme.  Japan had emerged as a force to be reckoned with during the Russo-Japanese War of 1904-05, but to me that's close enough to roll in with the Great War.

Also in politics, the Great War saw a change in the way European nations were governed.  Prior to the war, the landed aristocracy ruled almost every country in Europe (except France), but by the end of the war, that had changed everywhere (again, except France!).  The German, Austro-Hungarian, Russian and Ottoman Empires all collapsed.  The exercise of power was moved from a small elite to (theoretically, if not in practice) to a much larger franchise representing (again, in theory) the working and middle classes.  Power had been taken away from the hereditary elite that had dominated since mediaeval times, and those wielding power needed to seek the support of the masses in a way not previously seen.  (I know, I'm exaggerating a bit here, but I'm talking about a general trend)

The practice of war changed profoundly as well.  When the armies of Europe marched to war in 1914 almost every soldier was a rifleman.  An infantry battalion would have at most one or two machine guns.  Cavalry still carried lances and expected to use them.  (The British were an exception - as a result of the South African War, they expected their cavalry to be mounted rifles, and were the only major army to equip cavalry with the same rifle as the infantry.  As it happened, the only place the cavalry really got to take on a mobile role was in Palestine.)  Artillery were expected to fire over open sights, so most guns were field pieces.  Air power was almost unheard of.

By the end of the war, the practice of war had changed.  Army organisation had been shifted right down to platoon level - a platoon commander had a variety of weapons under his direct command including light machine guns, mortars, grenades, rifle grenades and more, and could call on support from tanks, aircraft and artillery (if he was lucky).  The principles used by British platoon commanders to attack an enemy strong point (suppress with fire base while maneuver element approaches and engages in close combat) was very similar to the techniques that I learned when I was in the Primary Reserves back in the 90s.

Air power was negligible at the beginning of the war.  By the war's end, there was a recognition of the importance of controlling airspace and there were a variety of aircraft types, such as fighters (to establish air superiority), ground attack, observation, and heavy bombers, that are still to be found today.

At sea, the highly vaunted but hugely expensive battleships and battlecruisers were found to be, for the most part, not terribly useful.  Before and after one major battle (Jutland) the High Seas Fleet and the Grand Fleet spent most of their time in harbour, and the bulk of the war at sea was fought by and against U-boats.

With the centenary of the Great War approaching this summer, it's worth remembering that there was more to the war than the poetry of Wilfred Owen and Siegfried Sassoon.  I've only scratched the surface of what there is to learn, and I'll keep on studying (and gaming, if I can find time) the Great War.
Posted by William Bailie at 22:37 No comments: