I finally made it out to Bonsor for another Trumpeter Club Night.  Hooked up with Doug, Peter and Jim for a game of Dragon Rampant - which was really just an excuse to pull some old models out for a bit of fun.  Jim brought his lizard men, Doug had a whole bevy of men at arms (both foot and mounted), and I brought two retinues:  El Cid era Spanish (which Peter took) and my old Ral Partha orcs.

Last month, we met up a Doug's house for some Lion Rampant fun (Doug's write up is here ). One of the primary reactions to that game was the frustration we had with the rule that ended a turn after the first failed activation.  We had many turns that never even started as the first unit failed the activation, so as a house rule we decided that each unit could test for activation every turn.  As it turned out, there were still lots of units that spent most of the game idle as they failed almost every activation test!

What follows is a few random shots from the game.  No particular story here:  everyone came together for a big bash in the middle.  Theoretically we were trying to capture the war machine, but it was largely ignored for most of the game. In the end, Doug and I were crushed by the lizardman/Spaniard alliance.

Here we see the Spanish king prepare to charge Doug's knights.  Or possibly vice-versa.  Didn't matter much as the heavy cavalry were pretty good at counter-charging! 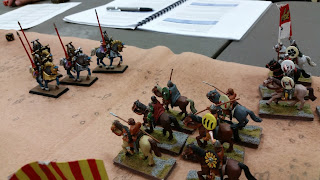 My orcs and Jim's lizardfolk spent much of the game tussling over this piece of wall. 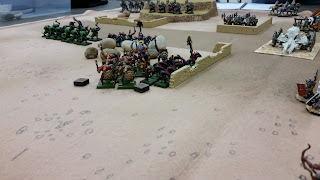 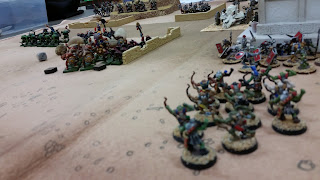 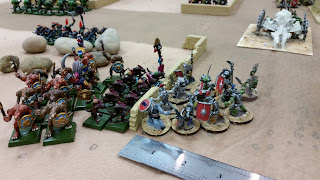 Here is the orc chieftain rushing to take the war machine.  (spoiler alert:  they didn't succeed). 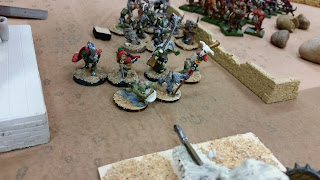 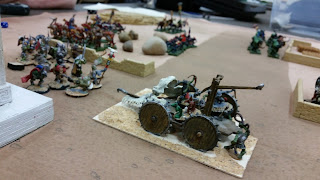 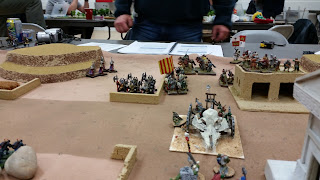 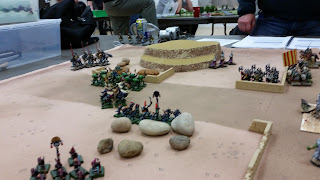 And here are the so-called 'fierce foot' just before they ran away... 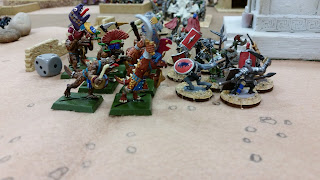 Action on the flank - the last of Doug's knights being stymied by the lizardmen. 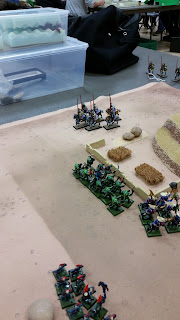 Throughout the evening, my dice rolling was abysmal.  This is fairly typical of my rolling:  the two sixes were nice to see, but there were always far too many ones and twos! 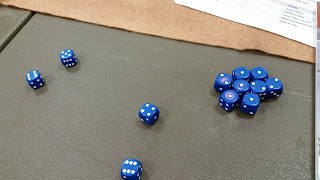 Case in point:  At one point, I had three battered units.  I needed to test for each to rally.  I rolled a pair of ones for the first roll, then snake eyes again for the second, then the third roll was a three (a two and a one). Had I failed a rally by a small amount, the unit would fall back and take another casualty, but for a low roll the unit would disintegrate - so I lost three units right there!

Posted by William Bailie at 21:24 No comments: