The Russian Army is not complete - it probably never will be.  However, it is about as big as it is likely to get.  I can still look at it and think, "I need another unit of dragoons, and some more cossacks, and it would be nice to add a second regiment of hussars, and more opolchenie."  However, for now enough is enough. 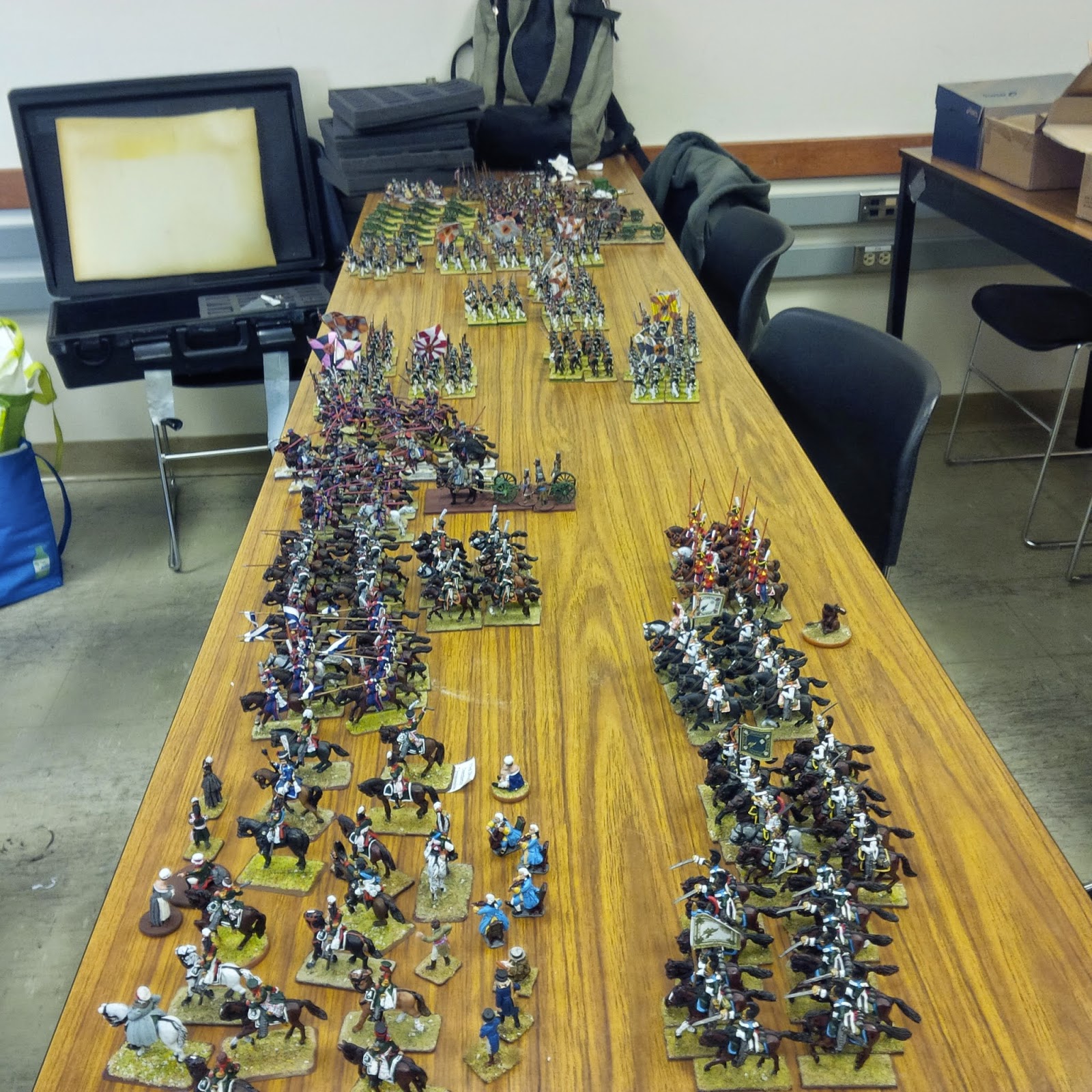 I'd like my next project to be for a campaign in 19th century western Canada.  I've narrowed the options down to three ideas.  Two are based in my alternative history 1870 (see here:  http://willstoysoldiers.blogspot.ca/2014/02/campaign-idea-alternate-north-america.html ) while the third would be based on actual history.  The campaigns would be as follows:

Pig War gone hot.  The actual Pig War was a twelve year standoff between the Royal Navy and the US Army on San Juan Island, and was notable in that the only casualty was the pig that actually started the whole affair.  In my version, there would be some event that would move the participants to an actual armed conflict.  Figures:  Royal Marines and the Victoria Pioneer Rifles would be represented by Perry BIF, and I'm certain I could find Royal Navy landing parties and gunners somewhere.  ACW Union troops would represent the US Army.

The next idea is even more fantastical:  the 1870 Wolseley Expedition to Manitoba would find not a deserted Fort Garry, but armed resistance from the Metis National Council, supported by friends such as the Fenian Brotherhood (like this bloke http://willstoysoldiers.blogspot.ca/2014/11/fenian.html ) and les zouaves pontificaux ( like this one: 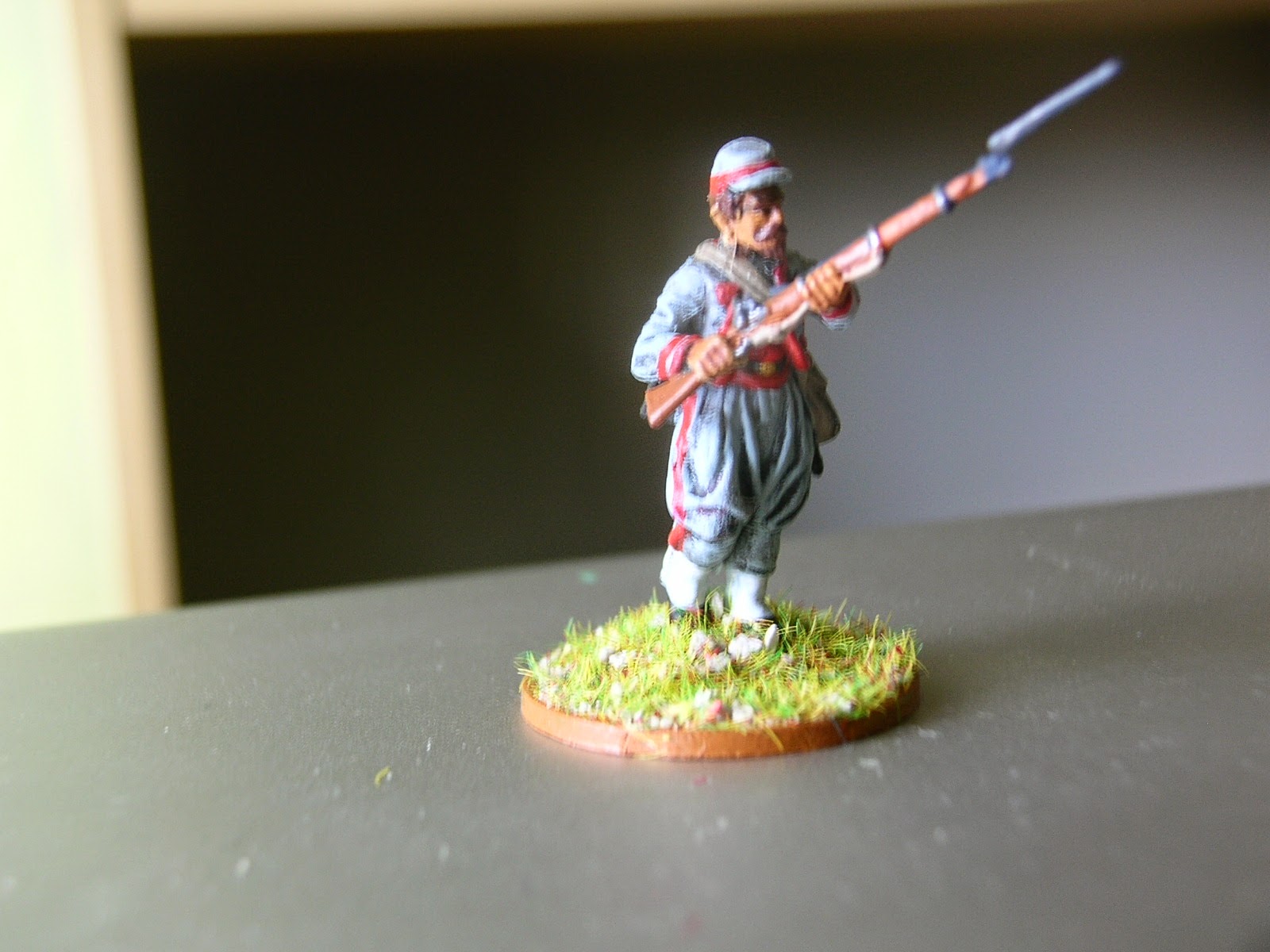 Wolseley's troops would again be Perry BIF.  The Fenians would be converted from Perry ACW Confederates and the Pontifical Zouaves from ACW Zouaves.  I'm not certain where I'd go for the Métis.  Maybe Foundry's Mountain Men (http://www.wargamesfoundry.com/our-ranges/old-west/old-west-men-wilderness-collection-bcow008/) and Artizan's Texians http://www.artizandesigns.com/images/img1054.jpg

My last idea is to go with a straight, historical 1885 Northwest Rebellion (or Resistance, if you prefer).  This one has several great battles, which were small enough that they could almost be gamed with every original participant on the table!  Battles such as Cut Knife and Fish Creek would be interesting to try on the table, especially with something like the Too Fat Lardies rules which allow for lots of fog of war.  Reading accounts, the biggest challenge for the government troops was the lack of intelligence that they had about their opponents, which allowed relatively small numbers of Cree and/or Metis to embarrass the army troops.

I really don't know what models I'd use for this conflict, though.  Rafm has a dedicated line, but the models are older and much smaller than anything else I have right now.  I'd rather collect newer models.  Zulu War models would appear to be ok, but I'd be frustrated that they'd be equipped with Martini Henrys instead of Snider Enfields.  No one else would even notice, but it would still bug me.  Maybe Castaway Arts Ashanti War British?  Hmm.  Also not certain about suitable Métis or Cree.  The figures I recommended for 1870 would not be suitable as by 1885 most Métis would have had repeating rifles such as Winchesters, not the muskets still in use in 1870.  I've seen others recommend Boers, which could serve to a certain extent (in this case watch for those bolt action rifles!), and maybe by trawling various wild west lines I could come up with suitable numbers of Métis.  As for the Cree, I could look at wild west plains indians, but I'd prefer warriors with more clothing - most of the wild west injuns seem to favour loincloths (and nought else), but the photos and drawings I've seen show most of the warriors better protected against the elements, with shirts or coats.

For me this is really an exercise in thinking out loud.  I can see that for the next 5 years or so I'll only have a couple of hours for painting here and there, and nearly none for gaming.  This project (should it get that far) will take me years to complete!  Please let me know if you have any suggestions or recommendations.

Posted by William Bailie at 23:37 No comments: