As promised, here is part two of my review of Warlord Games re-release of the Wargames Factory plastic War of the Spanish Succession Infantry.  First, a few shots of the assembled models.  20 marching musketeers and 4 command figures. 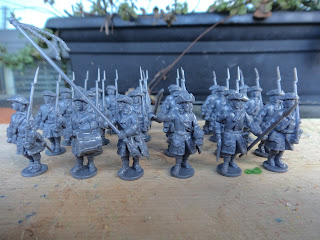 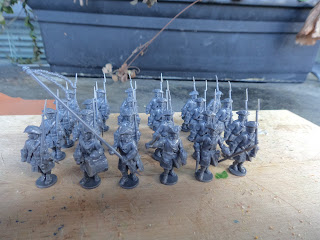 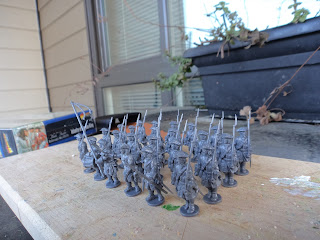 Command figures provide a few choices in how they can be assembled. For this one, my idea is a sergeant with a spontoon and a pistol.  He should really have a halberd, but the spontoon will do for now. 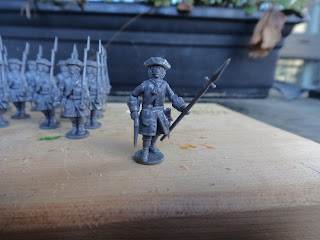 The officer, waiving his sword.  He should probably have a gorget; perhaps later I'll add one from greenstuff.  Or not... 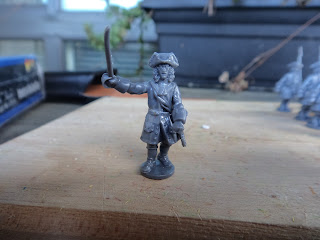 Ensign.  You can see the bow for the officer sash clearly from this shot; the officer has one as well. 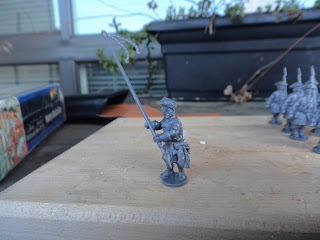 A couple of views of the drummer.  When I was clipping the plastic bits off the frame, two of the sword hangers flew off somewhere into the kitchen and have disappeared forever.  As a result, neither the officer nor the drummer have the appropriate hanger. 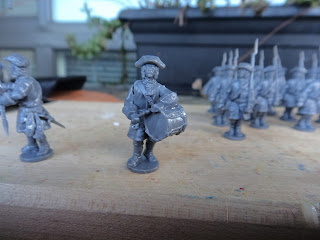 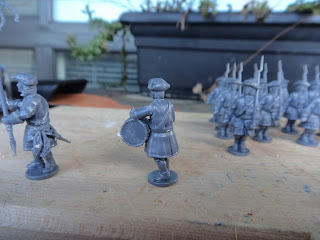 And finally, a few images of the rank and file.  These were dead simple:  add a head and a hanger.  I chose to have everyone in tricorne as I am a bit biased against have a small number of specials or elites - if I could do an entire unit in mitres, I'd consider that I don't want just a couple of grenadiers. 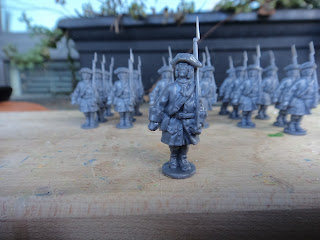 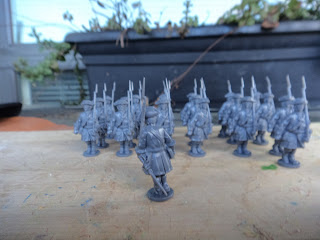 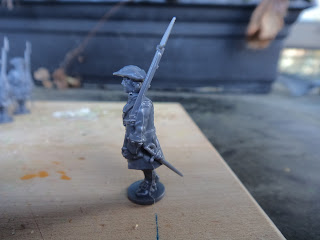 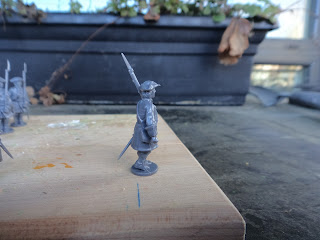 Posted by William Bailie at 18:12 No comments:

Redcoats on the march!

A few years ago, I swapped a few figures with an Ontario gamer.  Since then, these figures have been on and off my painting table, waiting to become important enough for me to finish them off. These are all Perry Miniatures, from the Sudan line.  The exception is the officer who stepped in from the Perry plastic box set.  Likely they should be in khaki or grey, but I was bored of painting dull colours and wanted to get some proper colonial redcoats into my painting mix! 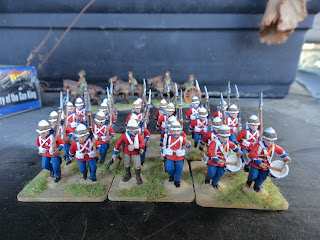 In column of march: 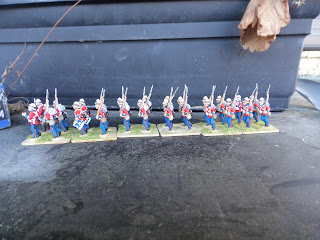 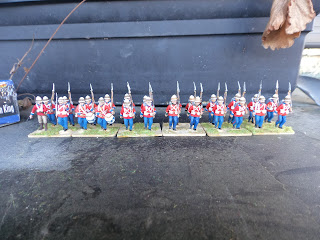 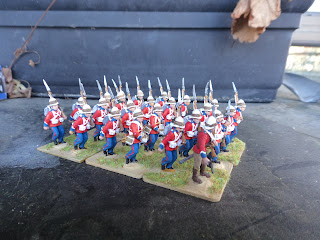 Officer listening to another of the colour sergeant's "no shit, there we were..." stories: 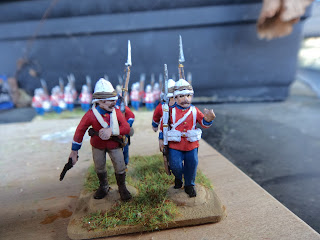 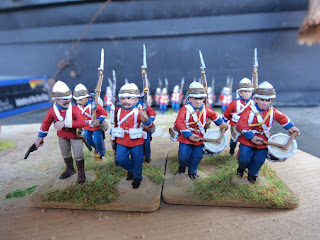 Posted by William Bailie at 18:02 No comments:

I just received a box of Warlord Games' Infantry of the Sun King.  My intention is to use them as infantry for Peter the Great's Russian Army.  I haven't been able to find any reviews of these online since Warlord Games acquired the Wargames Factory WSS product, so I'm going to give this a try.

The figures come in a standard Warlord Games box, with suitable cover art.  I chose to get the 'Infantry of the Sun King' box, rather than the 'Infantry of the Grand Alliance' box for no other reason than, hey, Louis XIV is cool.  I'll be painting them for the GNW anyway, so that hardly matters.  My understanding is that the only difference between the boxes is the flag sheet, so maybe WG can rebox them again with a Russian flag sheet! 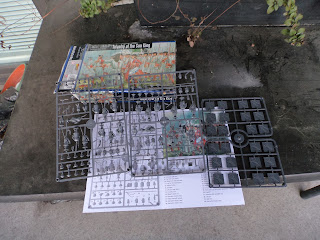 The box contains two sprues of figures plus the aforementioned flag sheet and painting guide.  There is also a sprue of 24 bases, each 20 mm by 20 mm, stamped with the 'Warlord Games' logo on the bottom, lightly textured on top. The info sheet contains a selection of flags, two different flags (regiment and colonel's) for each of five different regiments (Regiment Picardie, Regiment La Reine, Regiment de Tattenbach (Bavarian, I think), Irish Regiment de Clare and French Guards).  The reverse of the flag sheet has a brief index of the parts, which is a nice feature when choosing which part to go where, especially for the command figures and the grenadier mitres! 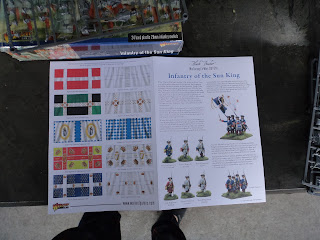 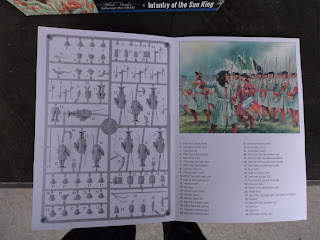 The two sprues are identical and each contains 10 infantry and two command figures, enough for a total of 24 figures.  Command figures can be assembled as officer, ensign or drummer.  All figures have separate heads and sword hangers.  Assembly is thus quite simple.  There are enough heads to give each figure a tricorn, with a couple of optional heads for officers.  There are also a few mitre heads - three different styles of mitre but only two of each per sprue, so you can't have more than 4 grenadiers (unless you like a sort of mix and match approach!). 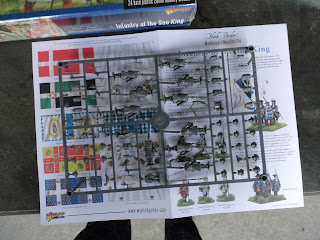 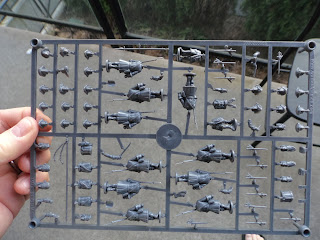 My initial thoughts:
- The choice of 20mm bases was a curious one for this set.  40mm bases would make more sense for playing games like Black Powder with large armies.  I'm always happy to get more bases, but I won't be using these bases with these figures (they won't be wasted, though!).
- Figures are clean, no flash, look easy to assemble. I don't know enough about the period to comment on details of the uniforms but for my purposes they will come together easily.
- I have not seen the original Wargames Factory WSS product, so I don't know how this offering has changed from the that (other than the price increase!).
- If the only difference is the flag sheet, why offer two boxes?  Why not just stick an extra flag sheet in the box and let the purchaser figure out which they need?  Seems like unnecessary extra marketing.

Once I assemble a few figures I'll put up another brief post with the results.

Posted by William Bailie at 08:02 No comments:

On March 17th, I hosted a game of 'The Men Who Would Be Kings' (TMWWBK) at the annual Trumpeter Salute convention.  Unfortunately, I managed to leave my camera at home so there will be no photos with this report.

The basic idea was to follow up on the last game I played with Doug, Peter and Jim.  I was ready for 4 players but only two signed up, so I left two of the field forces in the box and we played a much faster game with only one field force per side.  To be honest, and even though it pains my megalomaniacal mind to admit it, it was a much better game, much faster moving than those games with twice the numbers.

My intention was that this game would be a sort of sequel to my last game (read all about it here).  In this game, the British have regrouped after being frustrated by the Pathan opposition to their scouting and have determined to push all armed enemies out of the village.  I had prepared two British/Indian field forces with a force of Afghan regulars and a group of Pathan tribesmen to oppose them.  With only two players, each selected a field force to take into action.  Jim picked a British Field Force consisting of the 92nd (Gordon Highlanders), Sikhs, Gurkhas and a force of Indian Lancers, and Tim picked a selection of Pathan tribesmen (three groups of shooters, two mobs of Ghazi fanatics and a mountain gun).  We played Scenario B from the TMWWBK rulebook, Seek and Destroy.

Half the Pathans started off the board.  Tim deployed two groups of shooters along the walls at the end of the village and put the mountain gun on the roof of one of the village buildings. Jim had the first move, and advanced his infantry fearlessly to the edge of the fields east of the village.  The Gurkhas and the Gordons got into firefights with the Pathan shooters, while the Sikhs attempted a flanking move.

Unfortunately for Jim, the mountain gun was rather effective.  The gunners spotted the advancing Sikhs and laid down effective fire on them, causing one casualty.  The Sikhs were dismayed by the accuracy of the mountain gun, and paused in their advance (Jim failed the roll for pinning).  Even worse for Jim, when he tried to rally the Sikhs, he rolled snake eyes.  Whatever their officer said, it was the wrong thing and the Sikhs decided that it was time to go home.  The Sikh unit evaporated.

The rest of the game progressed less dramatically.  Tim brought on his reinforcements, with a mob of Ghazis proceeding down each flank, while the firefight continued between the Pathan shooters and the remaining Gurkhas and Gordons.  Jim's Lancers tried to cross the bridge into the village but were rather badly shot up, ultimately losing half their numbers to the mountain gun.  They still managed to maneuver up alongside the Gordons just as the Ghazis arrived on the flank. The firefight was a mixed event - the Gurkhas fared poorly, getting rather badly shot up by the Pathan shooters before the one group of Ghazis finished them off, while the Gordons did better, driving off the group of Pathans facing them.  In the end, however, the Pathans managed to hold on to their village, killing every Highlander, Sowar, Sepoy and Gurkha that faced them (with the sorry exception of the Sikhs who had decamped right at the start of the game).

Both players told me they enjoyed the game.  Jim was philosophical about his loss, noting that losing the Sikhs at the start tipped the balance against him, and realising that the Lancers were more glamorous but less effective than the field gun would have been.  (as it was, the Lancers were rather spectacular, wreaking havoc on the Ghazis before getting wiped out to a man...).

Thanks to Tim and Jim for an enjoyable game!
Posted by William Bailie at 21:44 No comments:

Email ThisBlogThis!Share to TwitterShare to FacebookShare to Pinterest
Labels: The Men Who Would Be Kings
Newer Posts Older Posts Home
Subscribe to: Posts (Atom)