For the past month or so, I've been slowly constructing paper ships for the French, British and Spanish fleets for The Battle of Trafalgar from Helion and Co., by Peter Dennis and Florian Richter. 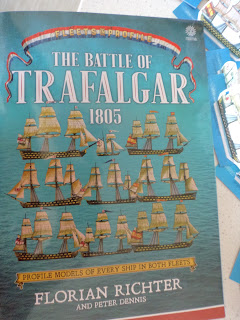 I had seen the Paperboys series of books advertised in places such as The Miniatures Page and Wargames Illustrated, and reviewed by gamers like Roly Hernans on his blog.  I thought these would be good for Arthur, if I could find one of the books that aligned with his interests.  As one of his favourite historical figures is Admiral Nelson, the Trafalgar book was an obvious choice.

The book includes more than 70 ships that can be made in profile, one for every ship in the combined navies at the battle, plus a few extras like shipwrecks, a whaler and a few Indiamen to allow for extra scenarios.  The ships are very easy to assemble, just cut them out, fold them and glue them to the base.  I used some cardboard on the first ship (HMS Victory, of course!) to make it stronger, but it really wasn't necessary.  I did however use cardboard stiffening for all the bases. 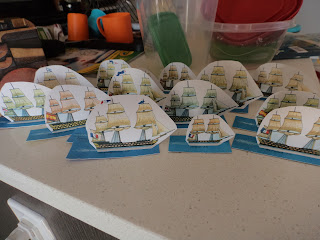 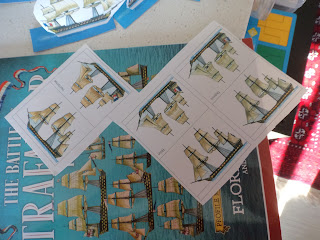 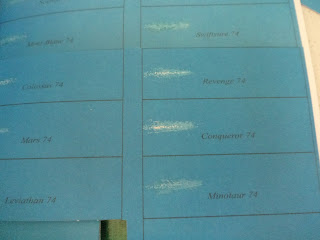 The book also comes with a page of flags, so you can jazz up the ships some more! 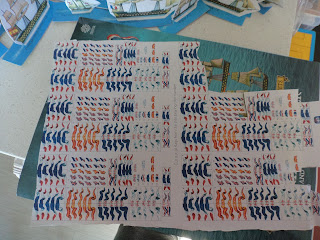 The directions included provide instructions about carefully cutting out all the white space, leaving masts of 1 mm width or so, to which appropriate flags can be added.  As I'm handing these over to a 5 year old for play, I went for much simpler construction.

Arthur then started modifying the ships himself.  The Spanish 136-gun Santissima Trinidad has been reflagged to the Russian navy and rechristened Petropavlovsk: 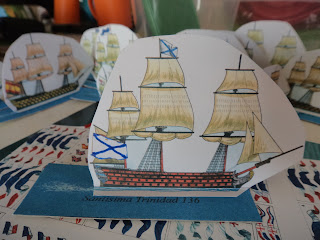 I also purchased another book, the Castle Assault book, as I suspected that Arthur would be interested in the Scottish, English and Welsh armies.  The problem with this one, and I understand with most other books in the series, is that the armies are not intended to be cut directly out of the book.  While it's a nice idea that you can photocopy the armies and make as many of each troop type or building as you like, it means that you need access to a colour photocopier as the sheets are printed on both sides, with different images on each side.  Eventually I stopped by a print shop and copied enough sheets to get started on the armies.  Arthur started with King Edward, King Robert Bruce and with Robin Hood and the Merry Men.  As you can see, building the figures is easy enough that a child can do it! 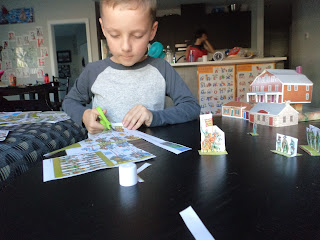 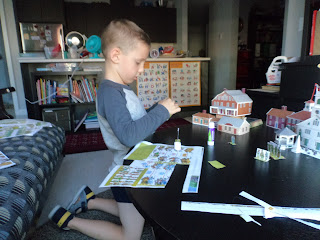 Buildings on the table are from a previous project, a paper New England Village, assembled by my wife. 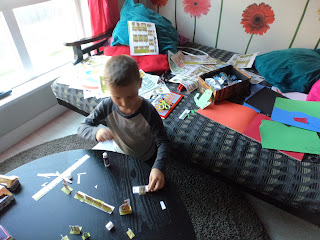 All in all, a fun project with my son!
Posted by William Bailie at 22:33 No comments: