It is my duty to inform you that there has been an incursion into Anglo-Egyptian Sudan by French forces.  Rogue elements of the French Foreign Legion, apparently seeking the lost city of Hamunaptra, were intercepted by a battalion of the King's African Rifles near the frontier.

Our forces caught up to the French near the village of El-Nowhere-a. 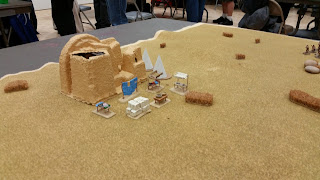 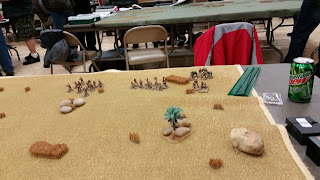 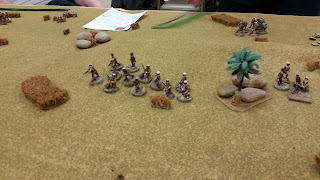 King's African Rifles, led by a "hero of the empire" form skirmish line.  Just after this photo, they took fire from the Legion, and the officer determined the importance of reporting back immediately to British command in Khartoum.  He decided he needed to carry the new himself, and he needed his company as an escort in case there were any other French troops around...  (despite having a terrific leadership of 4+, he failed the pin test from the fire, then failed again on the rally and the whole company dispersed...). 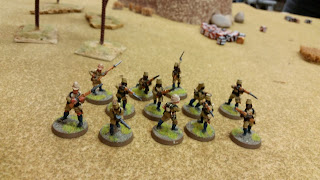 Remaining elements of the KAR advance toward the village. 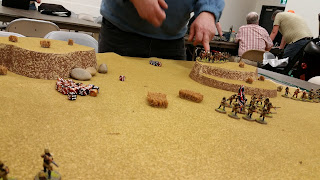 One of the KAR companies occupies the village market. 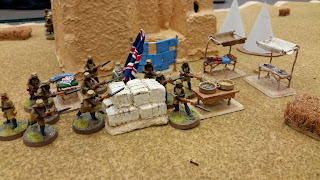 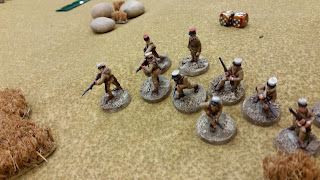 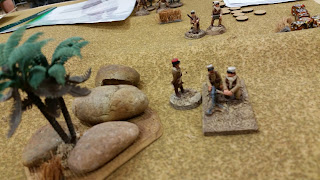 Legion company with reduced numbers and pin marker after being on the receiving end of KAR rifle fire. 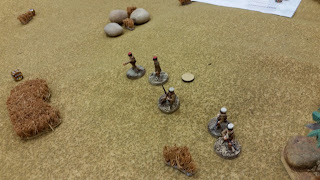 KAR company, led by their jolly sporting officer, moves out past the two tents. 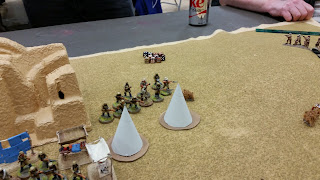 Last KAR company, led by an officer with a fine moustache, finally comes down from the hill from which they'd been observing the battle.  (Incidentally, British Jim himself has a very fine moustache!) 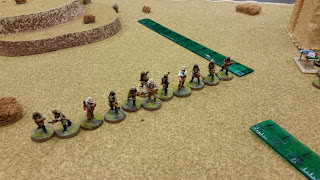 The first game ended quickly, in about an hour.  Each side had a 24-point field force.  Doug brought the Foreign Legion, two companies of elite, sharpshooting regular infantry plus a machine gun. I brought four companies of regulars (there were a few Lewis guns mixed in with the KAR troops, which we ruled would count as rifles - easier than making up rules for LMGs on the fly!).  We had two players ask to join in the game, both called Jim.  We figured the easiest solution was to call them French Jim and British Jim.

As the game ended nice and early, we decided to have another go.  For the second game, we did away with the officer characteristics, and simply gave each unit a leadership of 6+.  In the first game, the FFL had the misfortune of rolling for some rather desperate ratings, including an absolute liability with a leadership of 10+, while the KAR scored nicely with a jolly sporting leader (+2" on movement), a hero of the empire (leadership 4+) and a highly motivated leader who was allowed one free action and a chance to test for a second action.

For the second game, we deployed on the long edges (vs the short edges for the first game) - this had the advantage of getting us into the action sooner! 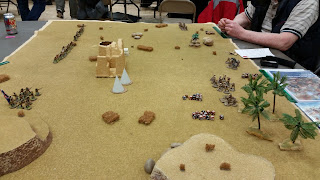 The FFL MG team, with their determined-looking commander.  He would later make a deployment error that would cost him dearly... 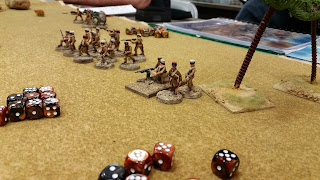 KAR company with a pin marker.  They were pinned and forced to fall back, but managed to stay on the table, and recover in time to destroy the Legion MG team! 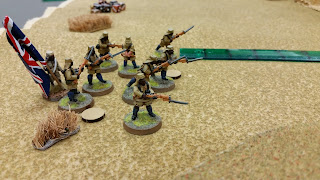 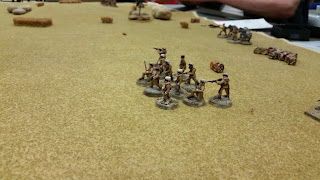 Shooting was definitely in the favour of the KAR.  They hit on 5+ compared to 4+ for the FFL, but had more rifles and thus more dice to roll. 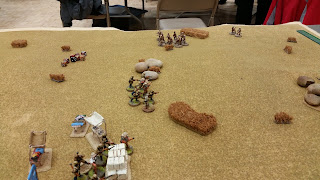 Doug thought that these troops were going to go around the hill, but instead they climbed up on top and were able to pour some rifle fire down onto his FFL, thus making up for running away in the first encounter! 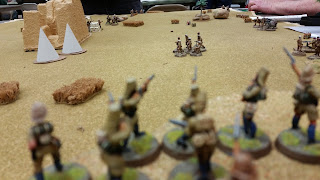 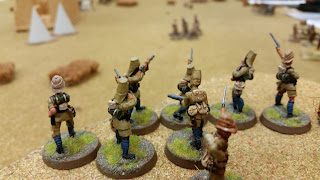 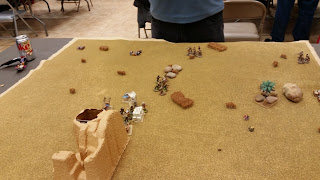 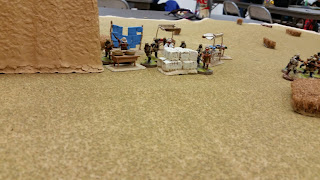 In the end, the KAR again won the day.  Some observations:


Still, TMWWBK is my favourite ruleset for now.  It even has little quirks to make it better (in my mind) than the other Dragon Rampant sets!

Doug's write up of the event from the French perspective is here.
Posted by William Bailie at 22:03 No comments:

Email ThisBlogThis!Share to TwitterShare to FacebookShare to Pinterest
Labels: The Men Who Would Be Kings
Newer Posts Older Posts Home
Subscribe to: Posts (Atom)