Inspired by those intrepid Kiwis of the Hutt (see here for a taste), Malcolm and I were inspired to have our own little tribute to the bicentennial of the Battle of Leipzig at UVic on the 13th of October.  Naturally enough, we were not prepared to refight the actual battle, as we had nowhere near the correct number of figures, but we managed a nice little rematch with my Russians taking on Malcolm's French.  It was my first game using Warlord Games' Black Powder rules.  My Russians had three infantry divisions, a reserve division, a cavalry division and a cossack/opolcheniye division.  Not much of a historical basis for any of it, but an opportunity to get all my toys on the table, and isn't that what it's really all about?

These were my commanders:

Bruce stepped in to control the Russian centre and left flank (consisting of 2 and 3 infantry divisions and the cossacks), while I took the Russian right flank with the cavalry and the 1 infantry division.  Malcolm controlled the French with help from Joel's Ottomans (who I believe were left out of previous official histories of the battle).


And here are the photos!

This is the battlefield at the start of the game, with Russians on the right and French on the left, with the Ottoman division at the upper left. 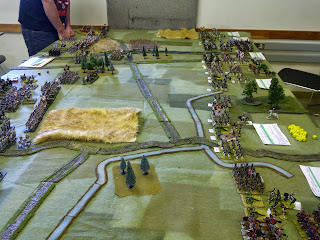 Here are the Russian cavalry just after making their glorious but impetuous charge against the French/Ottoman flank, when they found out that infantry automatically form square and so are immune to cavalry. 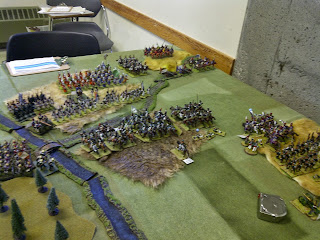 Here the Uhlans are about to allow the Ottoman heavy guns an opportunity to show the effectiveness of cannister at close range. 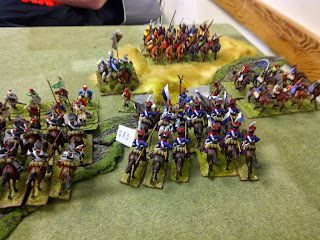 Meanwhile on the left the cossacks are about to discover that sweeping flanking manoeuvres cannot succeed if the enemy doesn't have a flank! (at least not unless one is willing to slip off the edge of the world...) 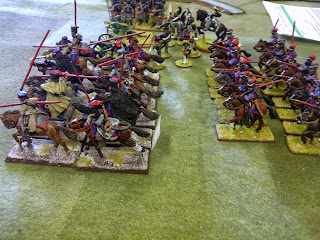 Dragoons and Horse Jaegers about to bounce off of the French squares! 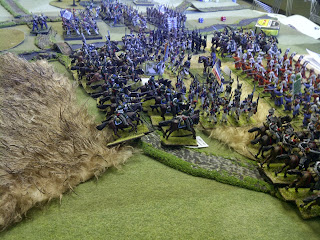 The Russian centre at the start, with the Reserve Division of Grenadiers and Cuirassiers in the foreground, with the pharmacist's cart waiting behind the line infantry.  The cart proved to be crucial, helping the Russian centre to rally at the crisis point of the battle. 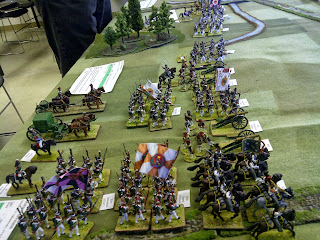 And for fairness' sake, a look at the French centre.  You can just barely see the cantinière in the upper left; she played a similar role to the Russian pharmacist in helping to rally shaky troops. 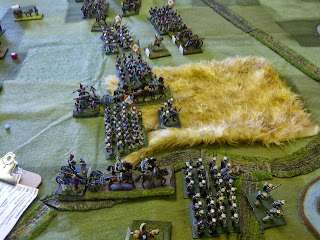 Here is a shot of some of the action on the left flank.  Opolcheniye are holding on in the woods, but you can see that they've been abandoned by the cossacks.  The Opolcheniye were very resilient but were eventually wiped out. 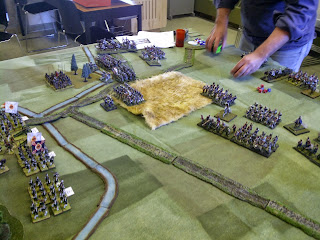 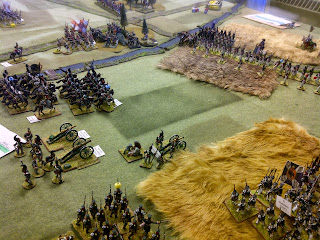 Here the Pavolvsky Grenadiers are about to easily clear the French defenders from the woods - guard infantry are very potent! 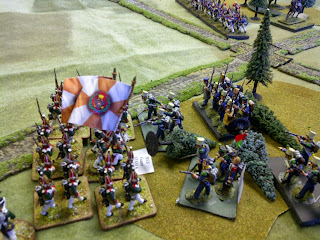 And finally the centre just as the French line is about to collapse.  It looks much like the start of the battle, but the units have been pounded to the limit of their endurance. 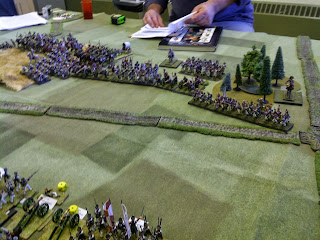 In all, I enjoyed Black Powder.  The game moves quickly, with occasion for humour (like when I left a unit confused by an order to advance without specifying where).

Email ThisBlogThis!Share to TwitterShare to FacebookShare to Pinterest
Labels: Napoleonics