Yet another line infantry regiment.  If I've got it right, these fine fellows represent the Vilna Regiment.  Perry Plastic Russian Infantry, except for the drummer who is Front Rank.  It's funny, even a single metal figure on a stand makes a huge difference! 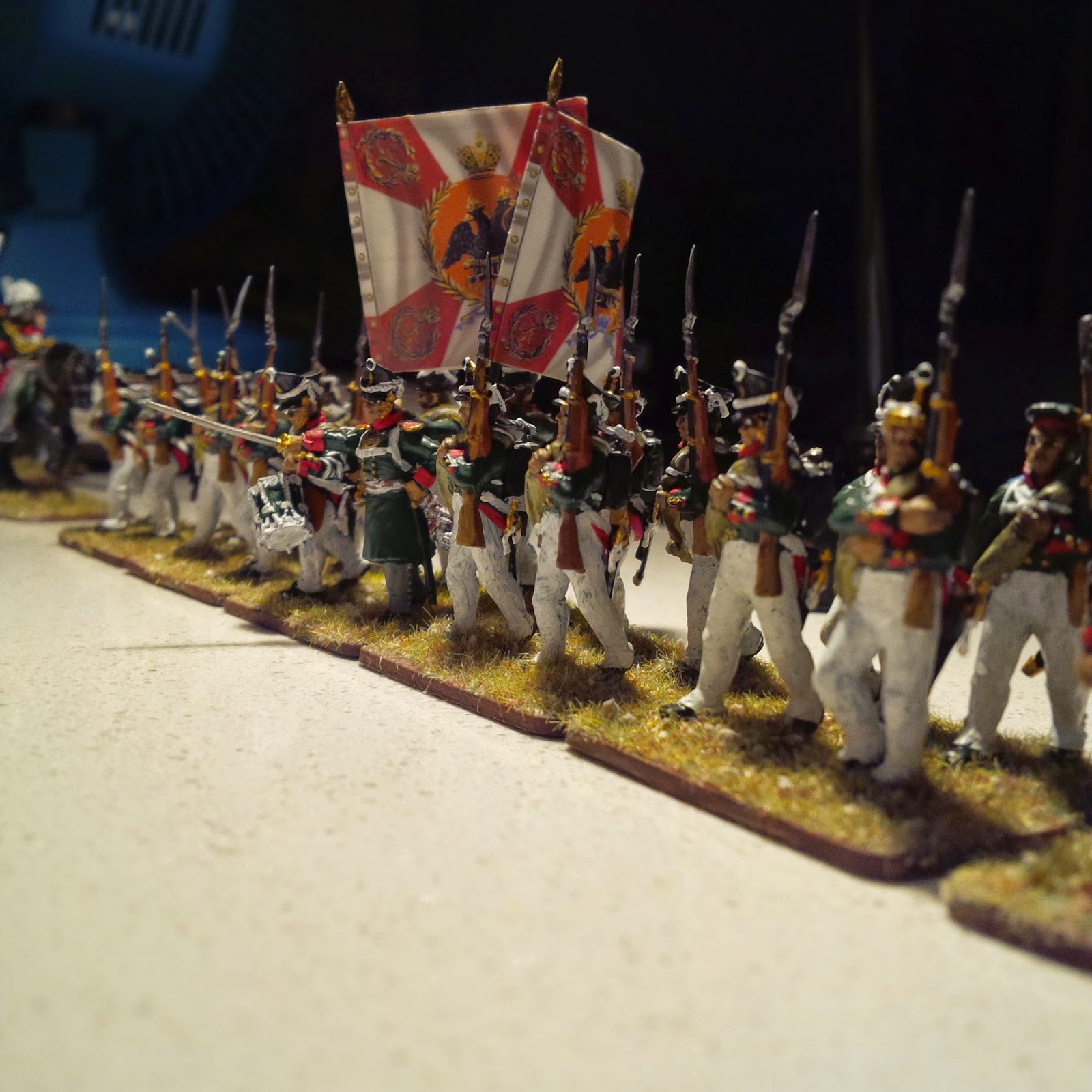 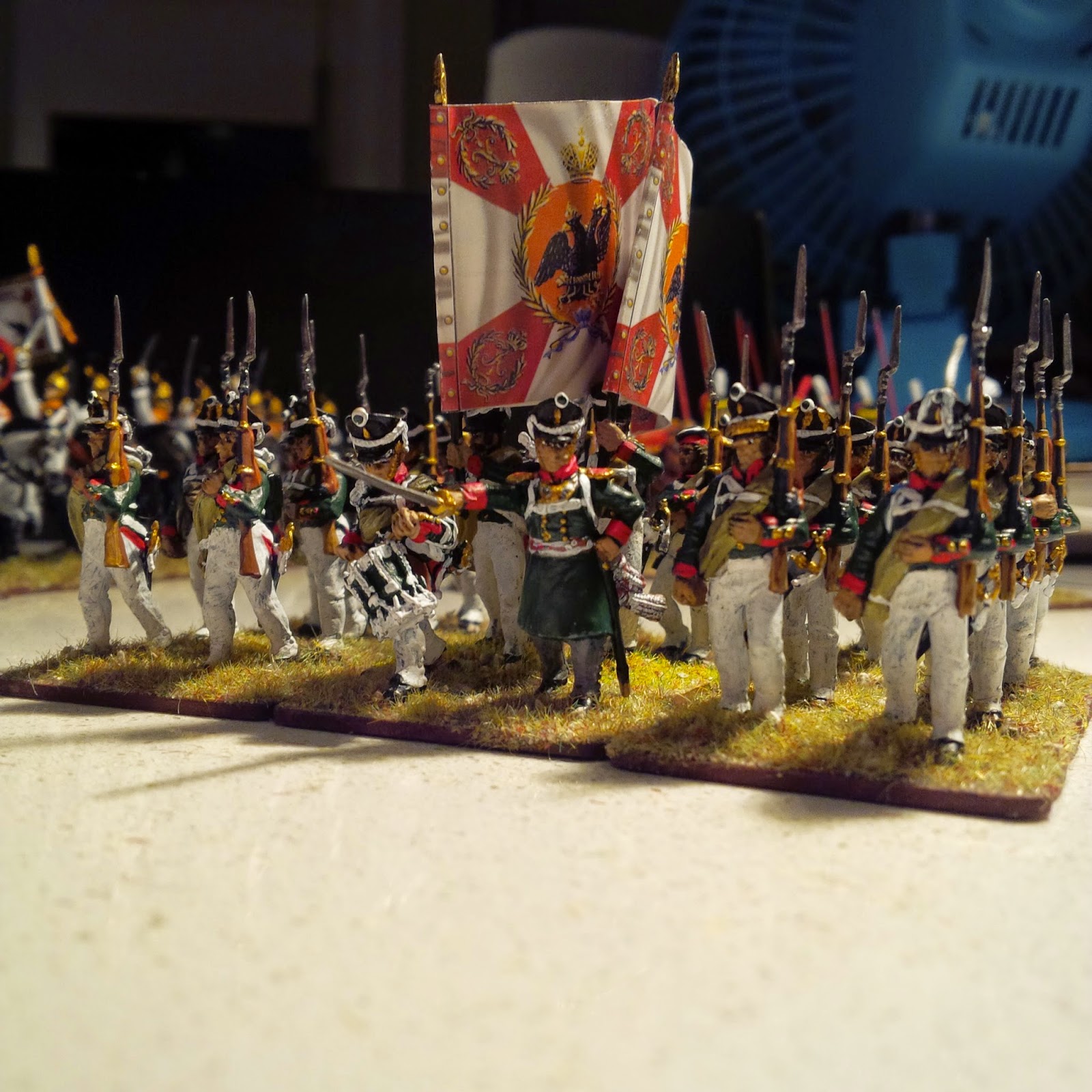 This fellow is a Front Rank Jaeger Hornist, who will replace a drummer in one of the Jaeger regiments. 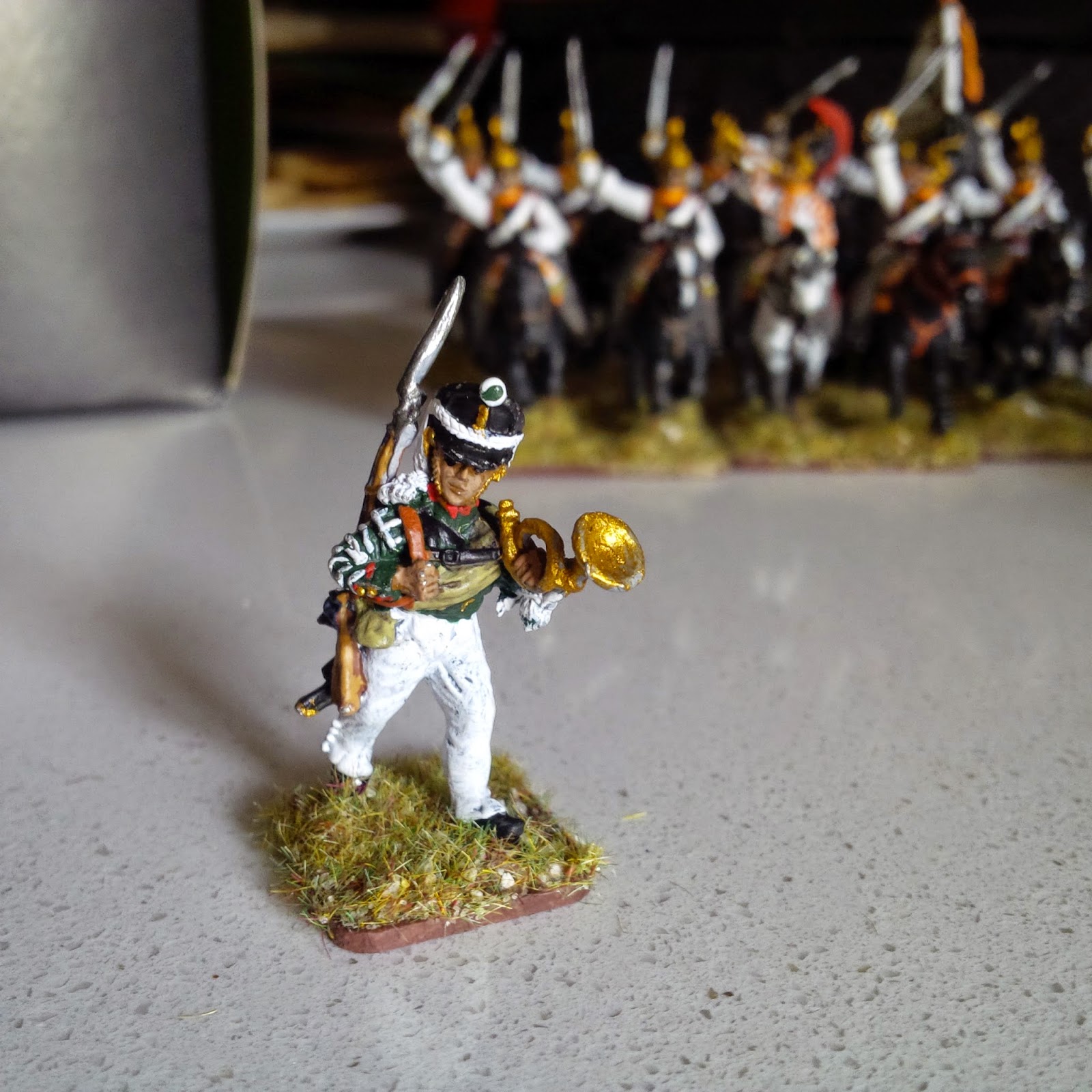 Months ago, I painted a unit of Cuirassiers, and was really impressed with their uniforms, white tunics, black helmets and cuirasses.  And then found out that the Russians always brigaded cuirassiers together so that you'd never get a single squadron or regiment of them, there'd always be at least a division if there were any present at all.  So, I finally added a second unit.  These are Front Rank, and represent the Ekaterinoslav Cuirassiers. 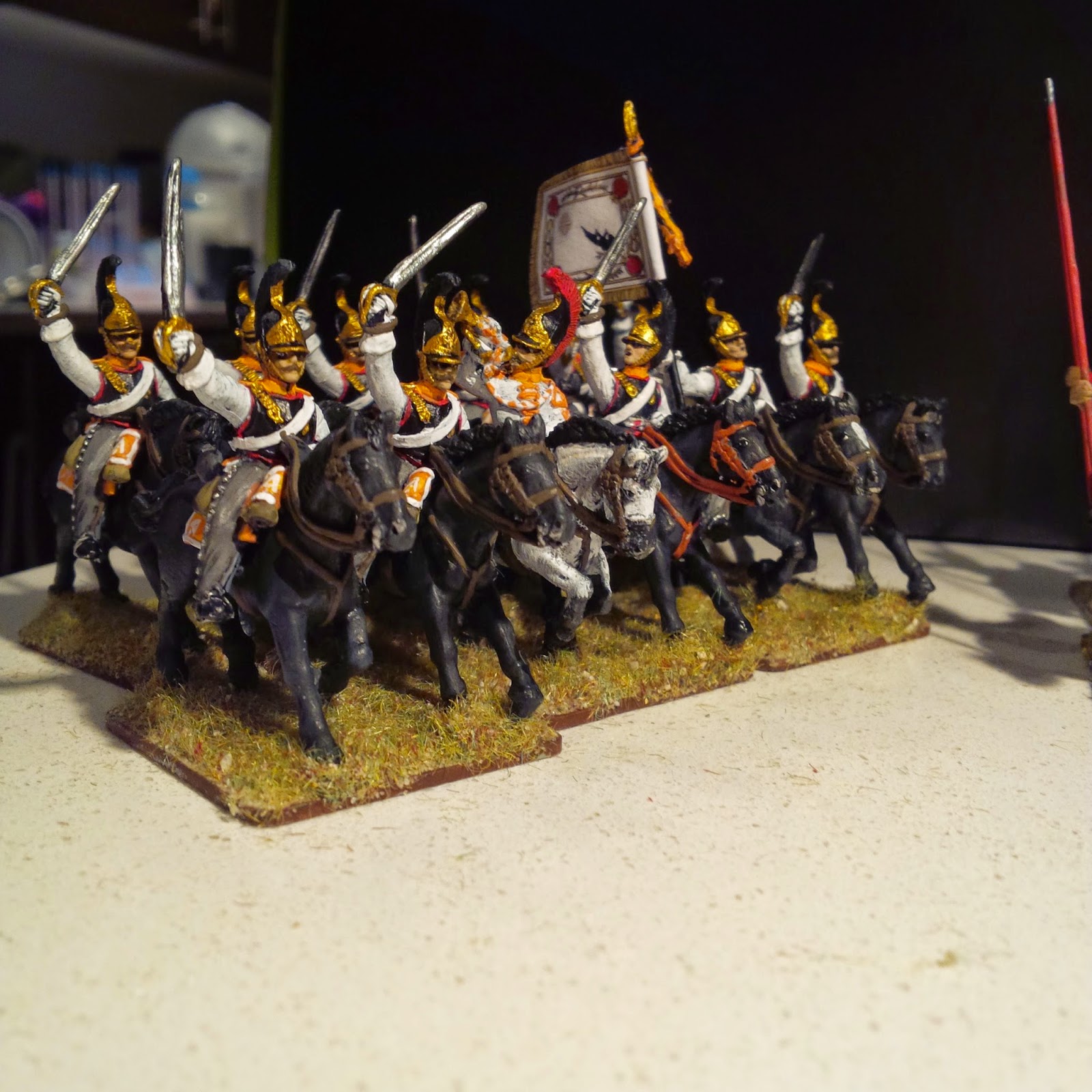 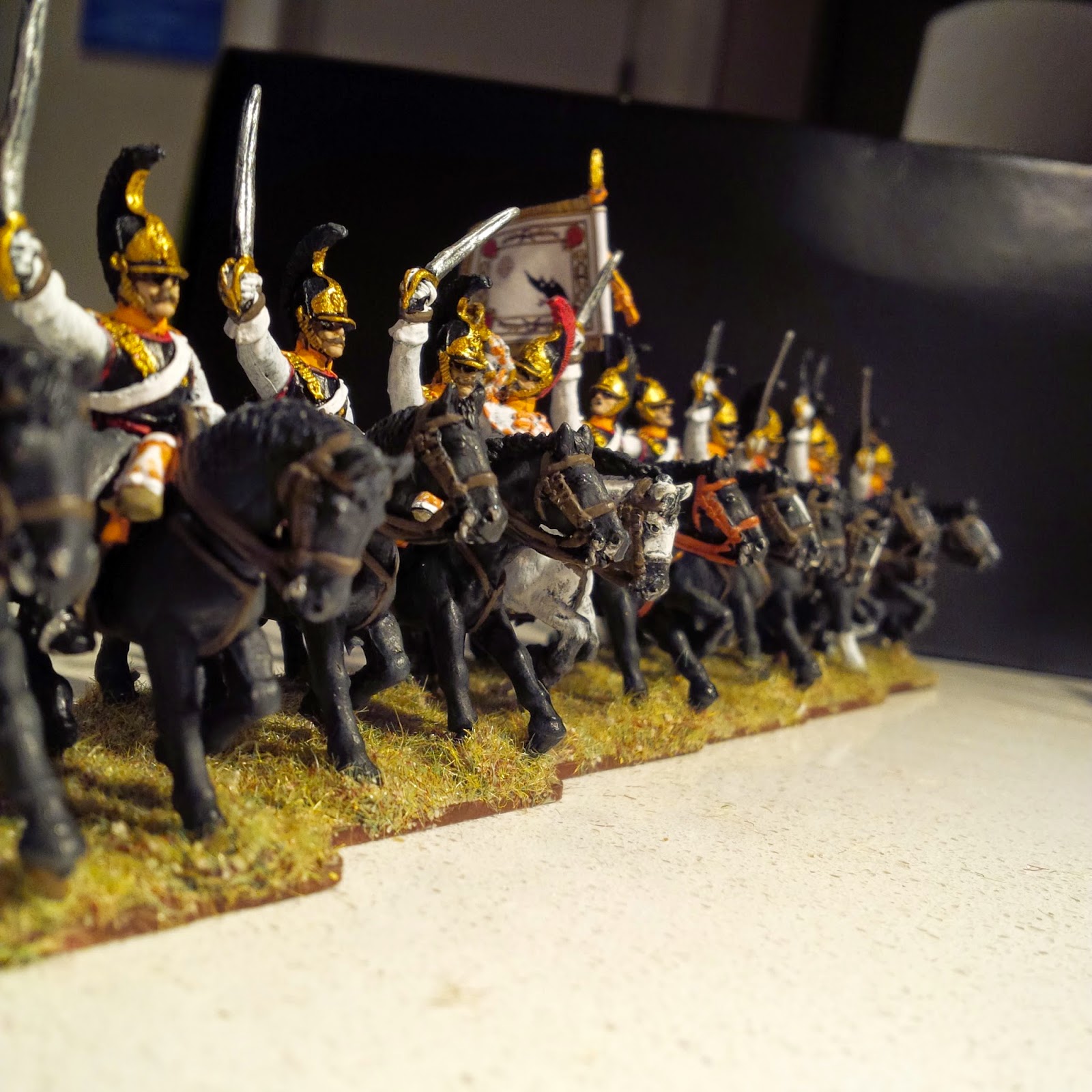 Front Rank has a great selection of personalities for the Napoleonic wars.  I'd previously painted Generals Bagration, Barclay de Tolly and Kutuzov, and finally broke down and picked up the Tsar of all the Russias, Alexander I himself.  Of course, I immediately realized that the Emperor could not appear without an appropriate escort, so I also had to paint up a squadron of Lifeguard Cossacks.  So, here they are! 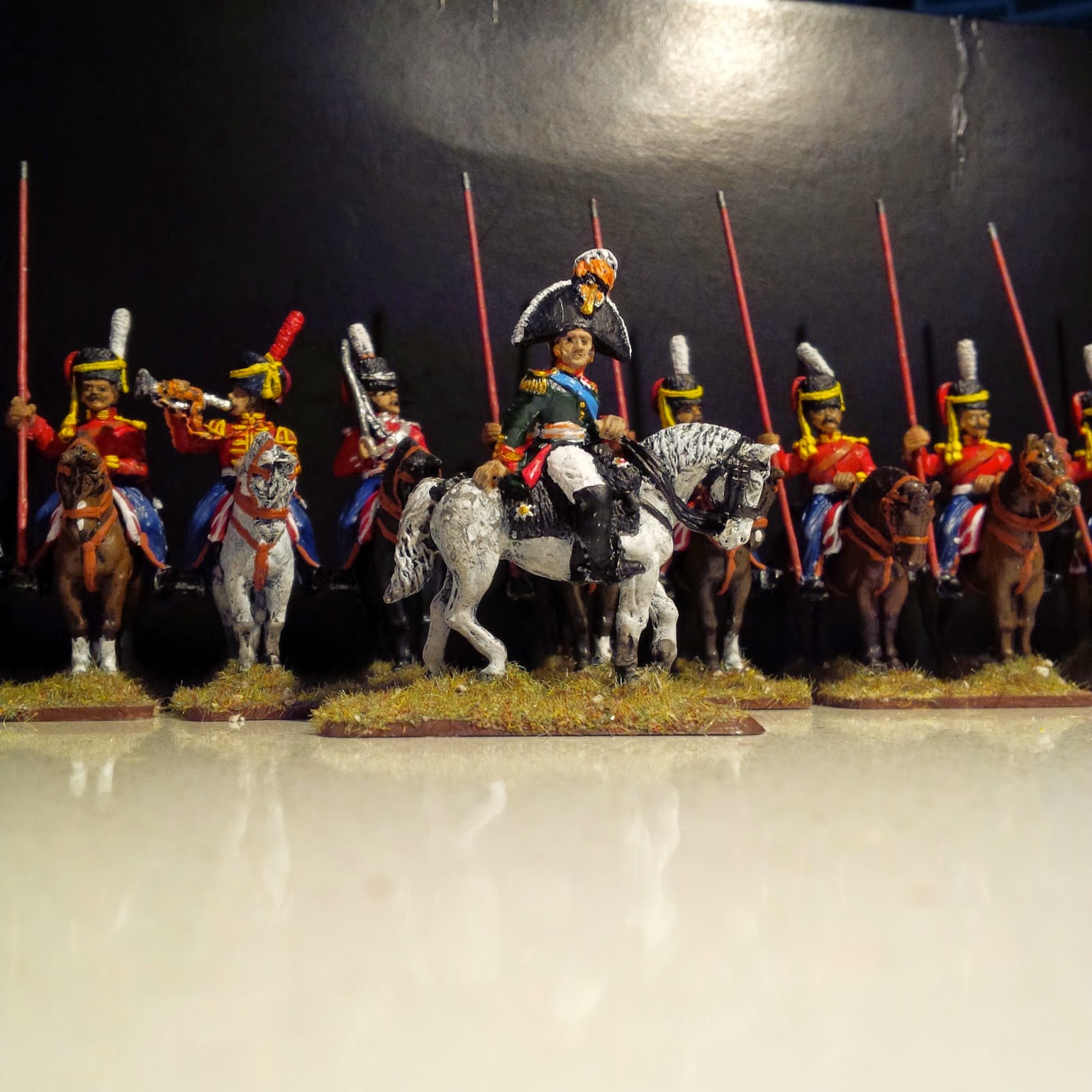 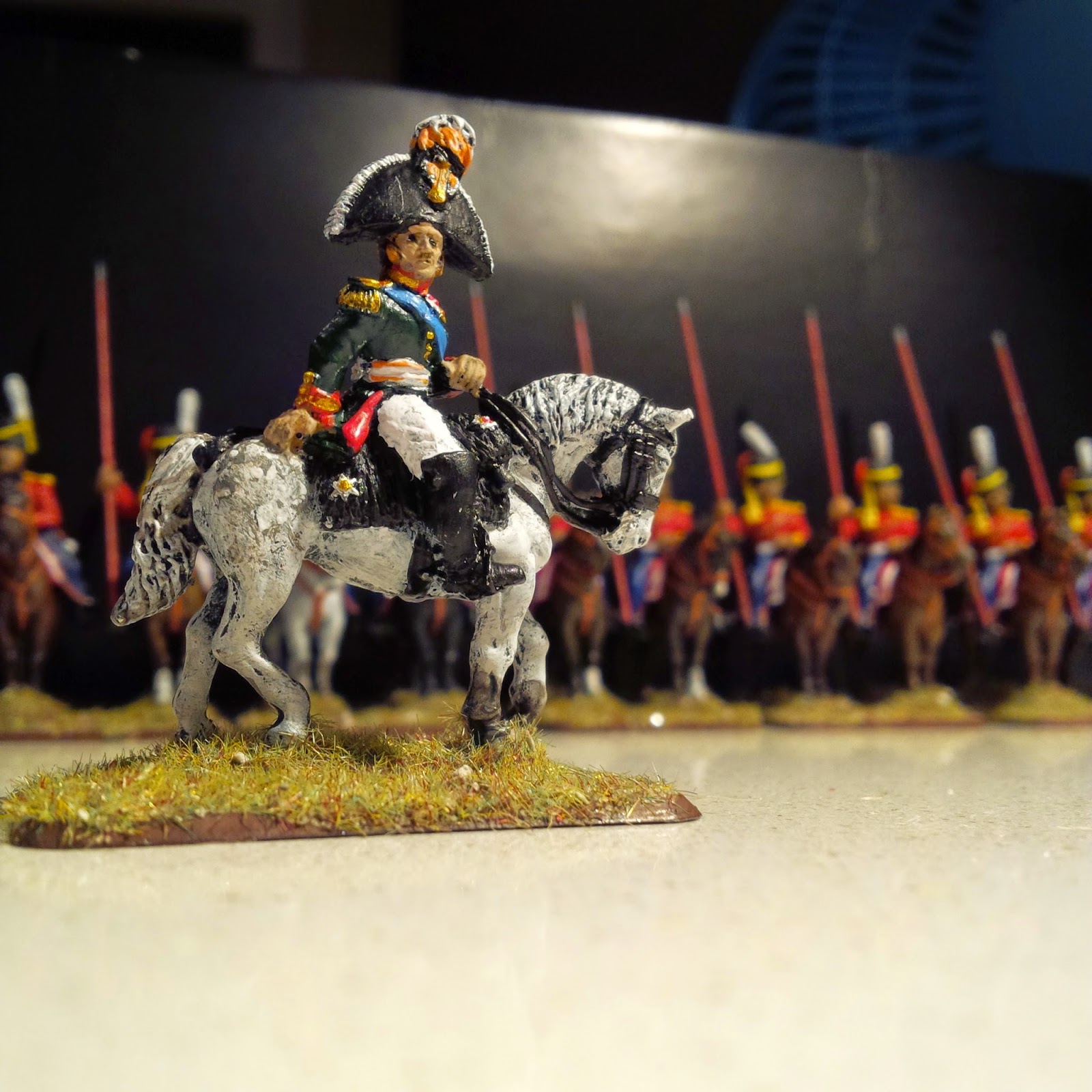 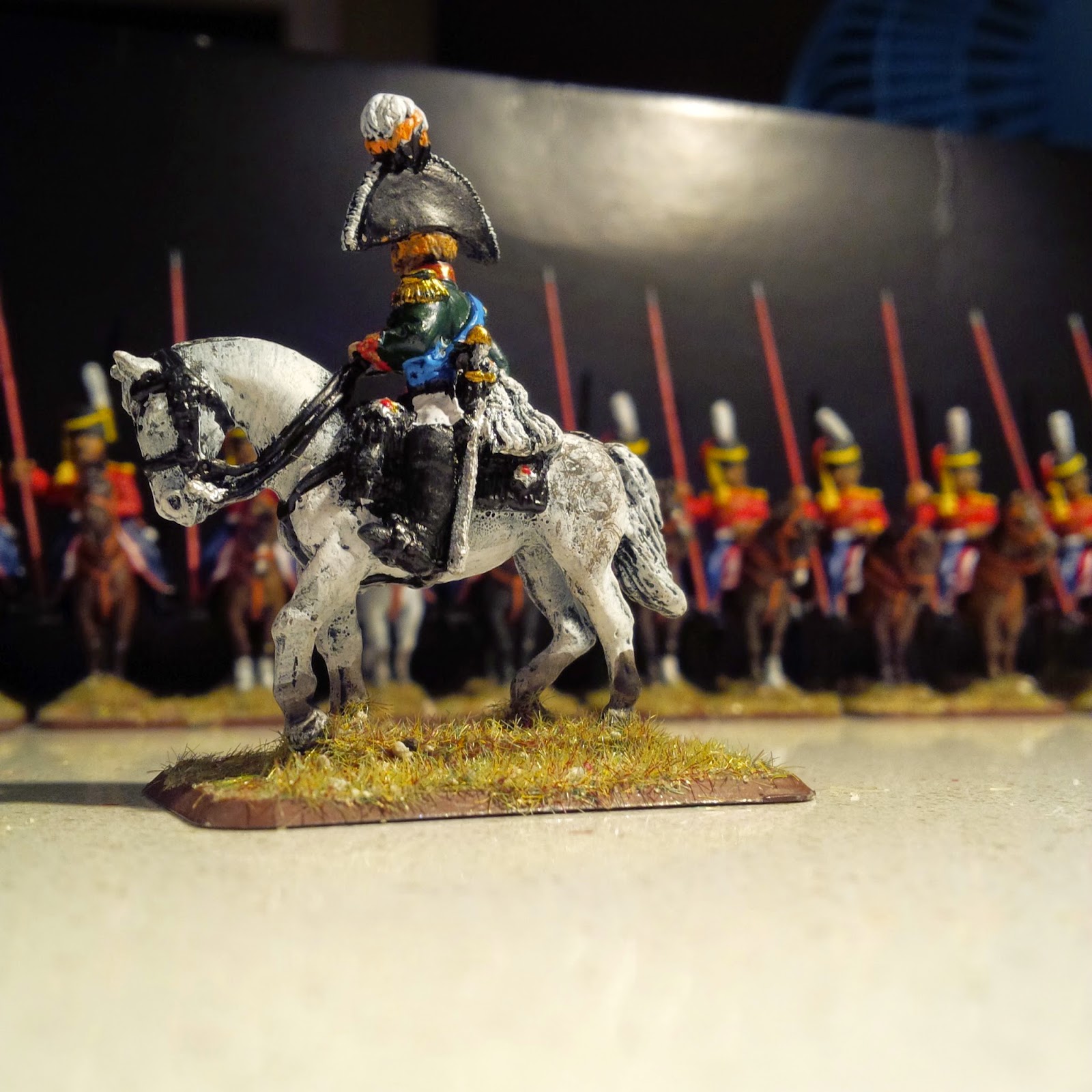 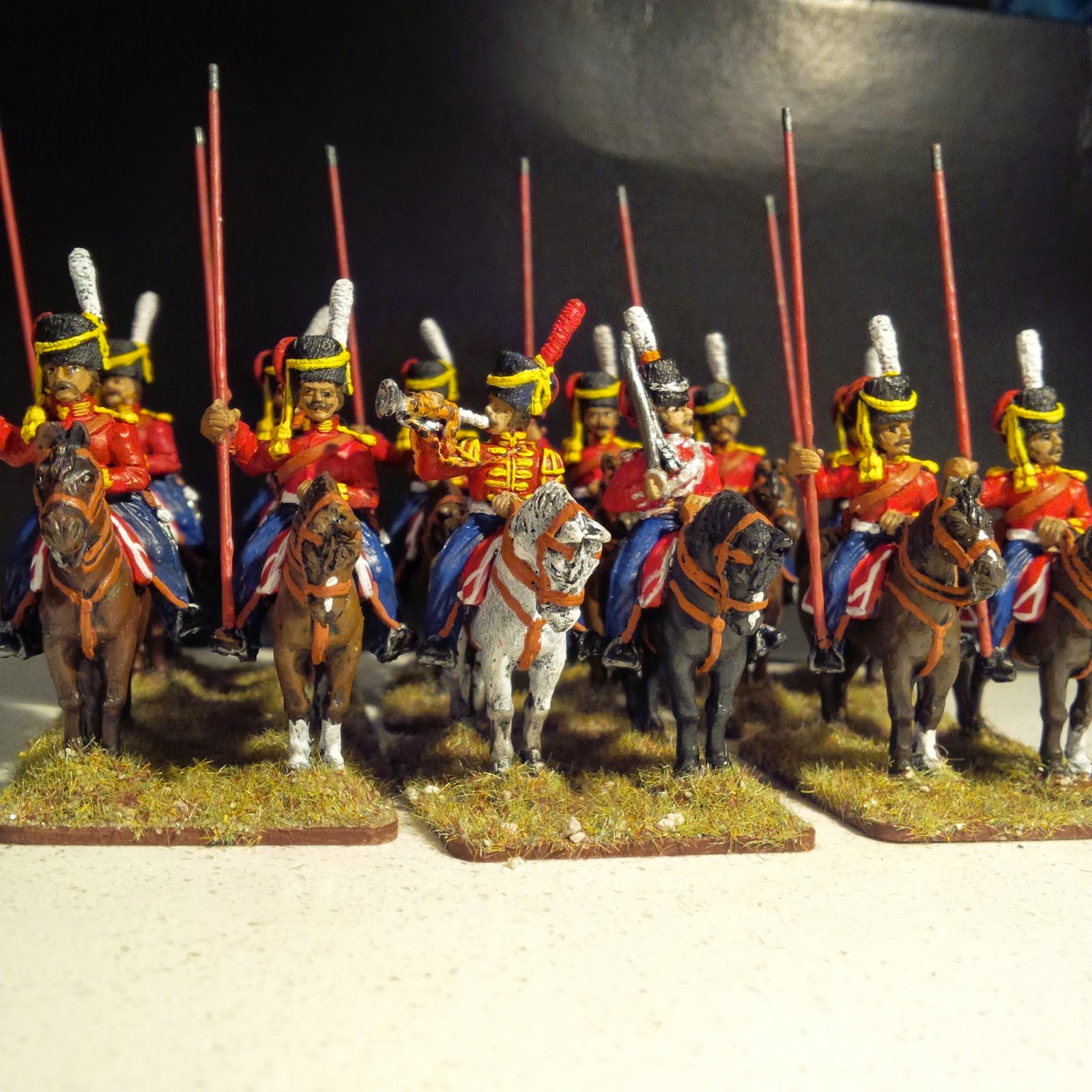 And finally, something a little different.  This disgruntled, riderless horse is from Eureka Miniatures and was produced for their 'Pig Tickler' VSF game.  I painted it for fun - it may end up being used to identify 'blown' cavalry, if I ever need such a marker. 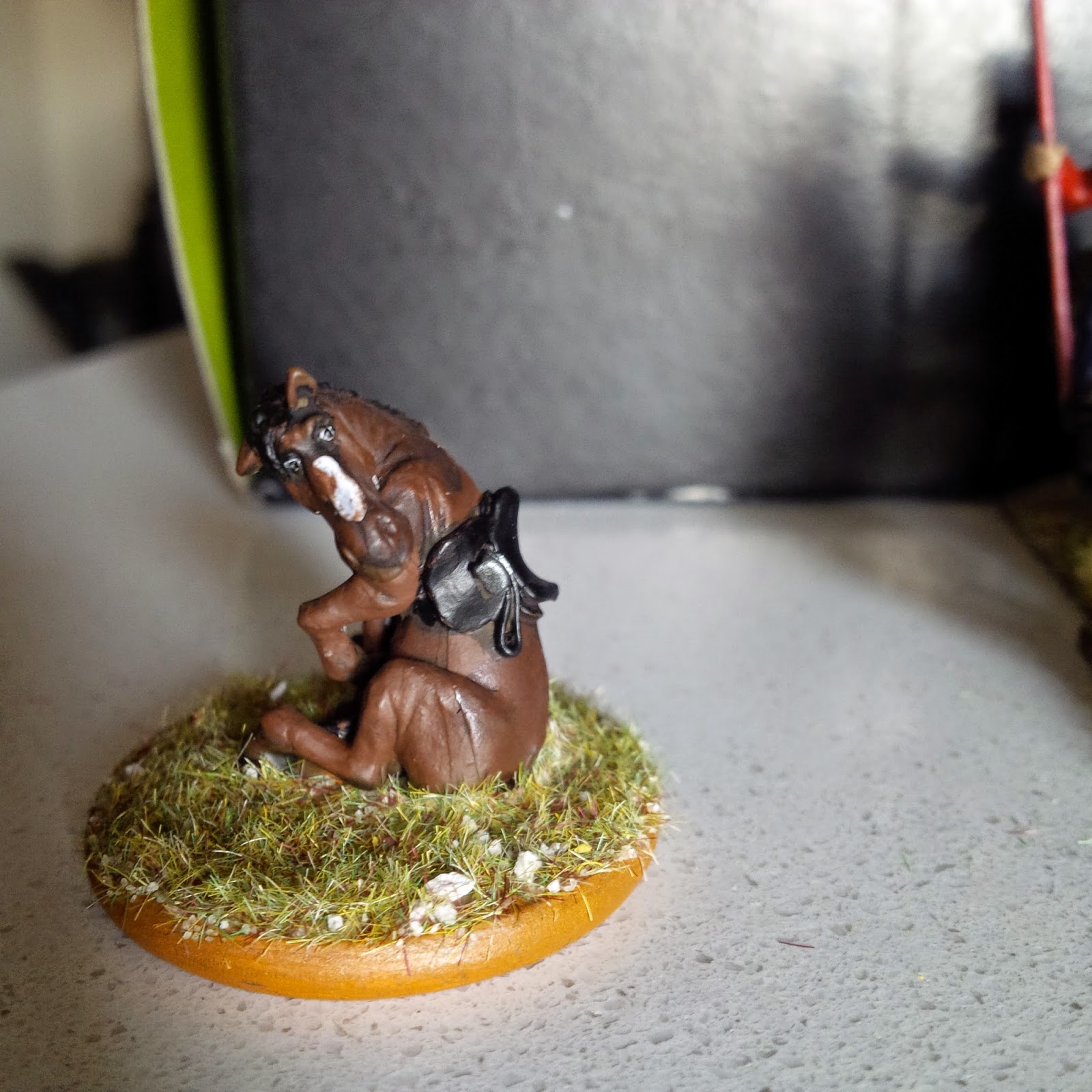 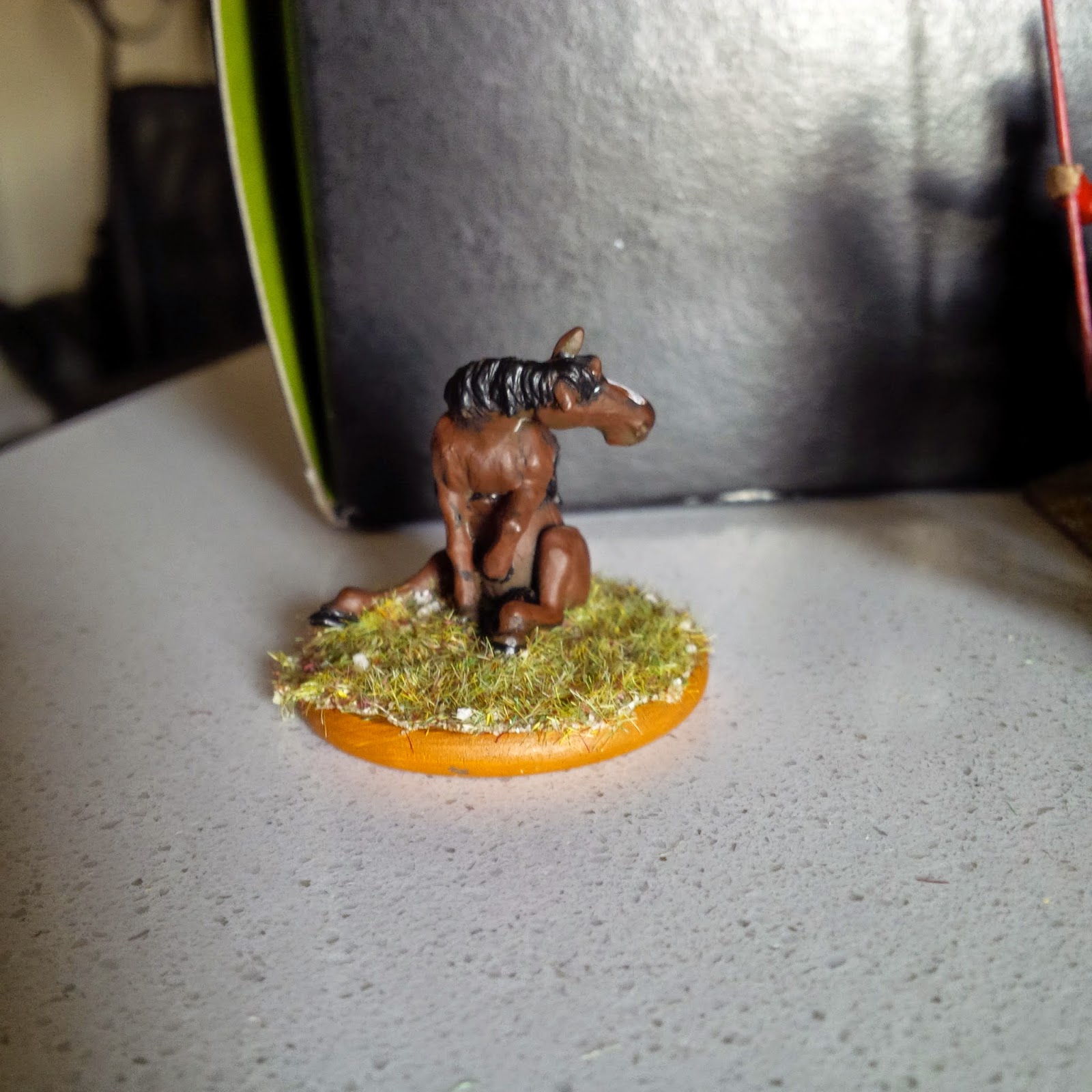 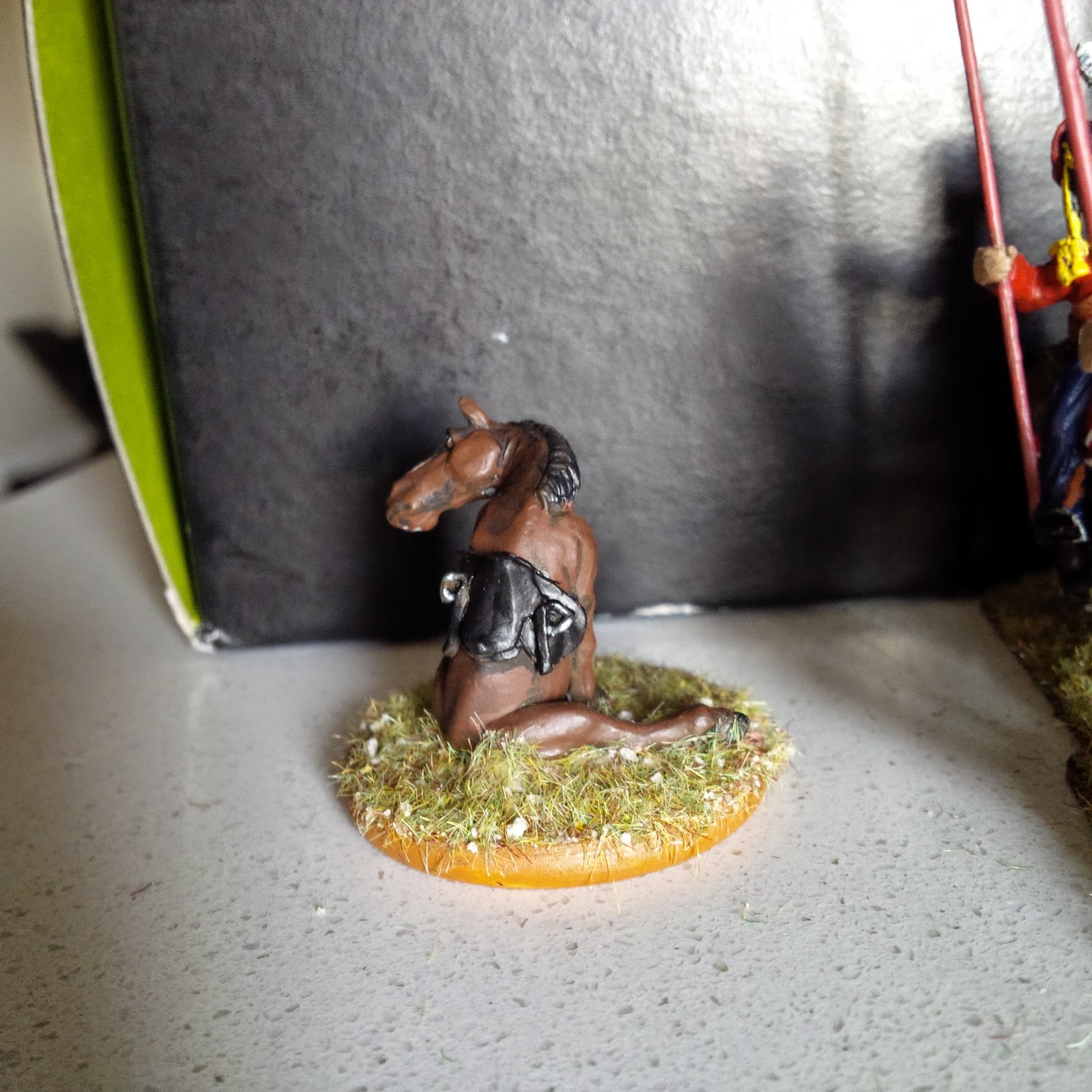 I have a few more things to add to my army of Alexander I, but soon I will take a break from painting Russians.  I will not say that I am finished my Russian army, just that it's time to do something different for a while.  I still want to add more hussars, dragoons, cossacks, opolcheniye, and more, but I'm almost to the point where I can say I have enough for now.  And there are members of other armies sitting in the pile stoically waiting their turn on the painting table!

Will
Posted by William Bailie at 23:15