As I mentioned in my last post, I have started painting Royal Marine Light Infantry to participate in the Pig War.  Naturally, they'll need some opponents.  Logically, these opponents should represent the United States Army from the period of 1860-1870.  So, following this logic, I've completed the first member of the opposing force.

This figure represents a member of the IRA, the Irish Republican Army, as the armed wing of the Fenian Brotherhood was known in the 1860s.  These Fenians are known for their invasions of the Province of Canada (now called Ontario and Quebec).  This model represents my best effort at the IRA uniform, as illustrated here by René Chartrand: 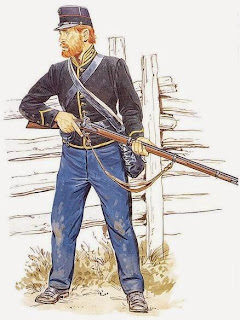 Although I believe the coat is supposed to be green, not blue, based on this surviving example:

So here's my attempt at a Fenian raider: 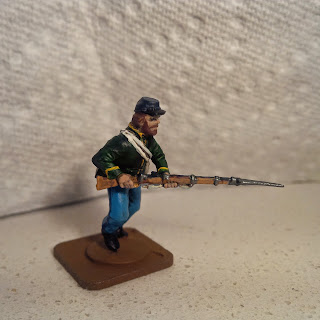 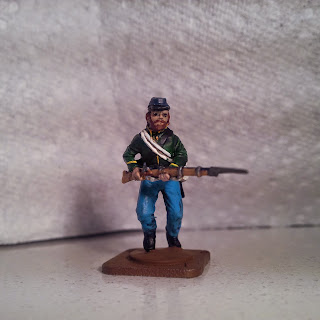 The model is from Perry Miniatures' Confederate Infantry boxed set.  I'm not about to model that truncated shako shown in the illustration above, so he's wearing a standard ACW cap (kepi or forage cap or whatever the blamed thing is called).

I'm aware that only a small number of the Fenians would have had this uniform or anything like it, and most would have been in civilian clothing.  When I paint this fellow's comrades, more than half will have some form of civvie dress, but I wanted to start with one at least showing the green!