As part of getting ready for my first attempt at playing Too Fat Lardies' Chain of Command, I have prepared a few game aids.  Apologies for the poor quality photos, I had to wait until late at night to set up an impromptu photo shoot!

CoC requires markers to track 'shock' on a unit.  I'd prefer not to have plastic or paper chits scattered around my tabletop battlefields, so I am going to use a substitution.  Years ago, when I played Contemptible Little Armies, I used bases of rats to represent pinned units (which at the time seemed quite fitting for trench warfare on the Western Front).  I'd roll out the rats again but since there likely won't be enough bases to meet game needs, I'll start instead with sheep and goats.  Shocked units will be followed around by small herds of ungulates that will gradually increase as their fighting ability diminishes!  A single animal will represent a single point of shock, and bases with multiple animals will represent multiple shock points. I'm looking forward to innuendo about the affinity of certain units to large numbers of livestock. 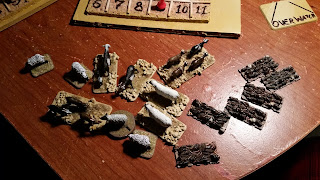 CoC provides a sheet to be printed out for tracking 'Force Morale' and 'Chain of Command' points.  The problem with putting markers on a sheet is that it can easily be bumped during play, leading to discussions about whether that marker was on 10 or 5.  Based on an idea from another blog, I've cobbled together these boards from foamcore and cork.  Force morale can be tracked by push pins, which (in theory at least) won't be accidentally moved.  Chain of Command points will accumulate on the top track, with a CoC die or token being earned each time the points reach the magic number (6). 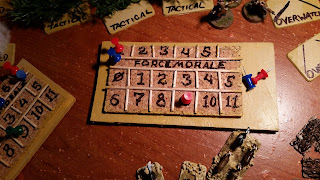 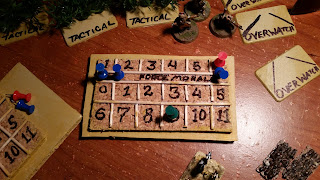 Another CoC marker is needed to show when a unit is on overwatch.  I'd considered using figures like these to show that the unit has been instructed to keep watch over a particular arc, but I think they'd be too easily confused with squaddies. 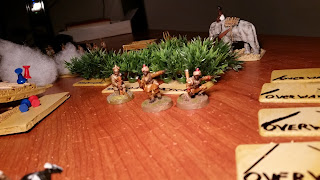 So instead I've made these ones.  They look like game tokens, they'll certainly do the job (at least for the first game), but I hope that eventually I'll be able to substitute something else.  I also considered using something like a pair of binoculars or a rifle, but that all seemed too fussy compared to the end result. 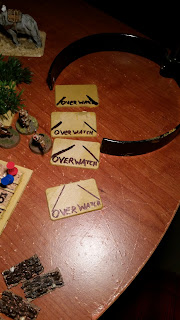 Tactical markers show units that are taking full use of terrain to provide any possible cover.  I have an idea that these units are carrying around little bushes and hiding behind them (a bit like Birnham Wood coming to Dunsinane).  Anyway, each unit that is 'tactical' will carry around one of these little bits of bush with them. 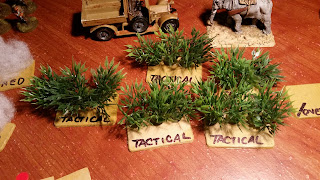 TFL encourages the use of creative modelling for 'jump off points', or JOP.  For my first game, the Brits will get to use the truck and the Jhamjars will use Jumbo.  I've also got a donkey cart for the Jhamjars and a stack of supplies for the Brits.  If a third JOP is needed I'll come up with something. 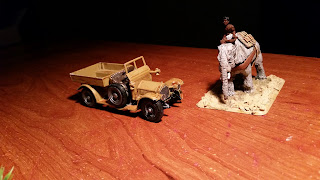 Another status to display is pinned.  I had a couple of ideas but they were too fussy, so I've gone with relatively simple smoke clouds.  Any unit that is broked will simply have two pinned markers.  If I run out of these markers, I'll use more balls of cotton. 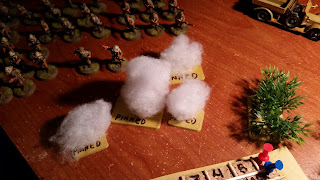 And now the actual forces!  First up, the Jhamjar Rifles.  Here is the command group:  subedar (equivalent to lieutenant), havildar (sergeant) plus a medic and the subedar's batman (with bugle). 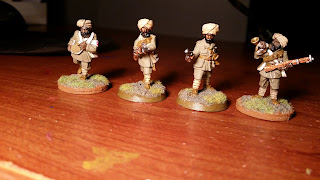 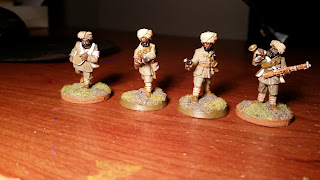 And here is the whole platoon.  Two sections of sikhs, and two of musselmen.  Each section is led by a naik (corporal). 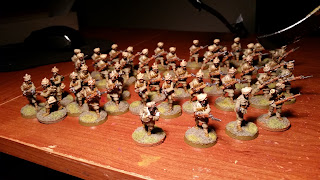 The platoon can count on a Vickers medium machine gun for support. 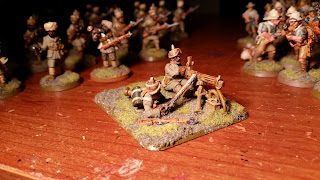 Just one shot of 'Ockerforce' for now.  Two sections have a Lewis gun (plus support), and two sections exclusively of riflemen.  The sections are sorted by headgear (sun helmets, slouch hats or peaked caps) and the two sections with slouch hats are distinguished by either shorts or trousers. 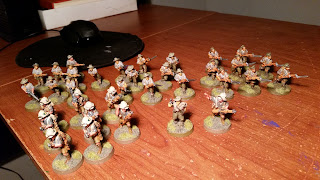 I'm going to play around a bit with force composition before the game.  Both platoons are inspired by the lists for Chain of Command Abyssinia - the Brits follow the British list (natch!) while the Jhamjars are based on the Askari list.  Tactical choices will be interesting, as the Brits get two LMGs and the Jhamjars only get rifles, with a possible MMG.  Nominal sections are 8 strong for Ockerforce and 10 strong for Jhamjar, but I'm considering reducing these as no army ever takes to the field at paper strength.  Units will be reduced by a deliberate Left out of Battle choice, as well as sick parade (malingering ne'er-do-wells!), casualties and other detachments.  But the basics are now covered!

Plan is to play the game on May 5th.  Inshallah!
Posted by William Bailie at 11:04