Hi, all!  For the past few months, Real Life (TM) has taken over, so hobby has been pushed to the back burner.  I recently made an impulse purchase of an actual Games Workshop plastic model, and decided it was time to get my painting mojo back on!

This figure is a Lord of the Rings' Nazgûl on a Fell Beast, flying possibly in search of the One Ring, or maybe ready to mix things up with the forces of the West at the Battle of the Pelennor Fields or in front of the Morannon.  Paint job is very basic: black base coat, then a few progressively lighter shades of grey, and a black ink wash for the fell beast, and similar but darker process for the Ringwraith. 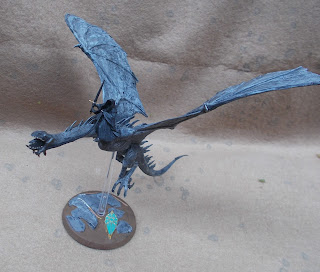 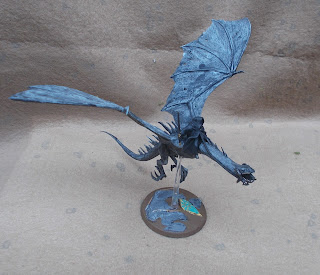 GW made a curious choice to include this sculpted base.  It's quite nice to have a sculpted base, don't get me wrong, much more interesting than a plain one.  However, (NERD ALERT) the selection of the weapons scattered on the base don't fit with the figure!  The rocks are fine, but there is an Elvish sword and shield from the Battle of the Last Alliance at the end of the Second Age of Middle-earth, but the ringwraiths didn't show up on fell beasts until the end of the Third Age!  Obviously, this doesn't bother me too much, or else I would have changed it. 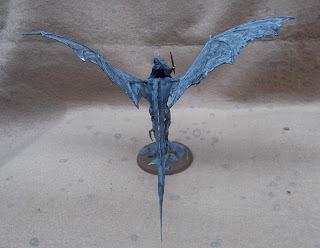 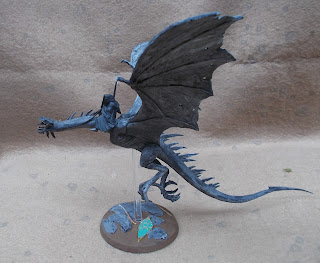 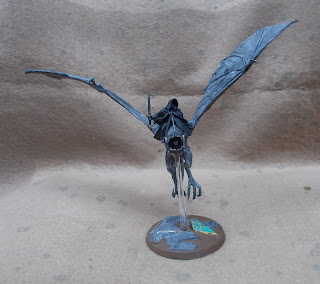 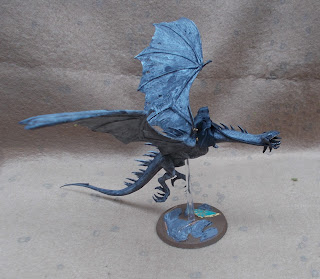 The model is plastic, went together in a jiffy.  There was an option to build it as the Witch King with his fancy helmet and burning sword, but I preferred to build one of the anonymous ringrwaiths instead.  I chose not to glue down the fell beast onto the clear plastic post, so it can be tilted if I wish into a sort of diving configuration.

Hopefully I'll make time here and there to slap some paint onto more figures in the upcoming months!

Email ThisBlogThis!Share to TwitterShare to FacebookShare to Pinterest
Labels: Games Workshop, Lord of the Rings