Reinforcements for the Germans

As I mentioned in my previous post about assembling a Fallschirmjäger Zug for Operation Husky, the Zug was noticeably under its paper strength.  It was short about a dozen men including 3 MG teams.

So first step was another postal order to Perry Miniatures!  That got me another three FJ machine gun teams, this time equipped with MG-34, mostly just for variety compared to the MG-42 that their comrades carry.  I am concerned a bit that the MG barrels are a bit thin and thus liable to snap, so I will be careful handling these figures.

As before, each team has their squad marked on their base to avoid confusion.

Perry Miniatures also supplied a LG40 recoilless gun, to add a bit of firepower in case these fallschirmjäger end up facing any allied armour. 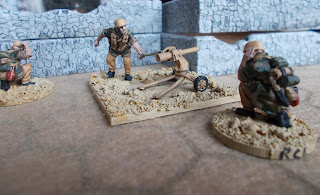 The LG40 had a considerable backblast, so using in a confined space was not recommended!  The set also includes a nice little hand cart. 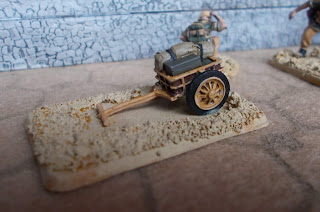 The Zug was still under-strength by about 6 men, and according to my Chain of Command lists, the LG40 and the tripod-mounted MMG teams were also short one crew member each.  I decided to make up the numbers with recruits from the Perry Miniatures Deutches Afrika Korps set.  While these recruits are not wearing the distinctive FJ jump smocks, I figured there might be a few possible reasons:  they may have removed (or lost or destroyed) their smocks, or they may have been transferred over from other units.  More glaring are the ones with standard German infantry helmets rather than the FJ jump helmets.  I tried to mix up the uniform colours and provide a mix of helmets and field caps to show troops who have been in the field for some time.  Again, bases are marked to show to which section each soldier has been assigned.

One more addition to the German force is this Company B kubelwagon, complete with a driver and machinegunner.   This will give the FJ Zug a recce option which may or may not come in handy.  The decals are leftovers from the sheet that came with the Rubicon Opel Blitz. 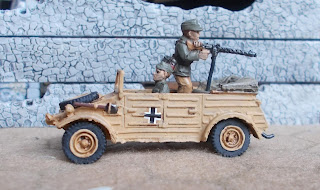 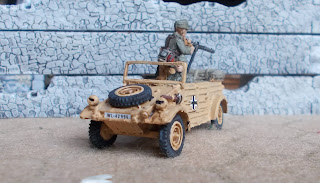 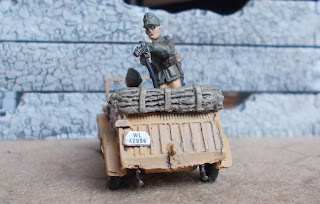