New markers for Chain of Command

After my Chain of Command game last week, I realised that my collection of markers for this game was inadequate.  Here are the first few of the new markers. 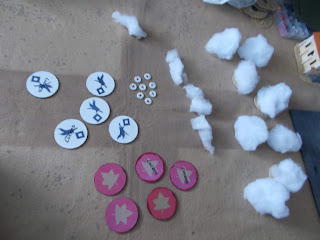 I've updated my quick and dirty Patrol Markers with some that are a little bit neater.  The gold maple leaf on red represent the 1st Canadian Infantry Division.  At least, it's supposed to be a red background:  next time I will try to find a better colour printer 8^)  The black and white marker shows the insignia of the Fallschirm-Panzer-Division 1. Hermann Göring.  When each marker is locked, it can be flipped over to show its updated status.  I realise now that 5 is an odd number to choose.  Most scenarios call for 3 or 4 markers, and there is one scenario (Flank Attack) where one side gets 6, but none actually require 5 markers.  I suppose the markers could also be re-purposed (for example, as jump off points), so I'm not too fussed about how many there are. 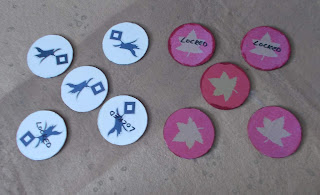 Tracking which leaders were wounded and the severity of the wounds got to be a bit of a hassle in the game, so I've made some markers.  They are marked differently on each side, either -1 C.I. to show that the JL or SL has had his command initiative reduced by one, or wounded to show that he's out of action until the turn end.  These can also be used if a FOO is wounded. 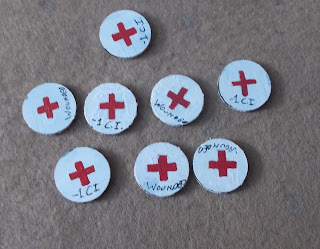 These are some 'covering fire' markers.  I couldn't think of a good way to show covering fire, which is really a bunch of bullets fired in the general direction of an enemy team or section in order to get them to keep their heads down, so I went with smoke clouds.  It's exaggerated but hopefully gets the point across without having to put a plastic chit on the table.  These are each 4" long, representing a single team's fire.  A full section can cover 9", in which case two of these can be put down side by each to show the greater amount of cover fire being thrown down.

And finally, a bunch of 3" smoke markers!  Each of these smoke clouds is on a 3" disc, so the extent of each smoke cloud's area of effect should be easy to measure. Smoke was a big part of the last game, and will likely factor in any game with British, Commonwealth or Imperial troops.