After months of preparing, I finally was able to play Chain of Command Operation Husky!  Of course, this was only my second 'proper' game of CoC, so I made lots of poor choices while I figure out what the troops can and cannot do.

Of course, I forgot to bring my camera, so big thanks to Doug and Gord for sharing their photos for this report.

The scenario is lifted from "A Qualified Success", a mini-campaign for Chain of Command that I found here:  https://tinyhordes.com/campaigns-for-chain-of-command-community-made/

The campaign as written puts British troops from the King's Own Yorkshire Light Infantry (KOYLI) against Italian Coastal Division defenders.  I substituted my Hasty Pees from the 1st Canadian Division for the KOYLI (same ratings, equipment, organisation so the only difference is the name), and HG Panzergrenadiers for the Italians (slight change, but one that accommodated in the rules - main effect is to boost the Canadian support options to make up for the improved capacity of the Panzergrenadiers).  I'm still focussed on learning the main game rules, so I set aside the campaign and just looked at the scenarios.  The scenario I chose was Scenario Two:  Resistance at Cassibile.

First up here are a couple of views of the table.  Don't mind the FJ in the foreground, they are set out in squads (gruppe, I think, in Deutsche!). 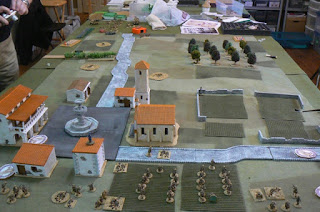 And a view from the other British/Canadian table edge.  I'm expecting these photos to be useful references when I try to set up the table again! 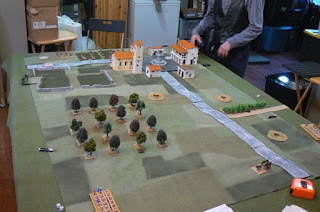 First lesson - it's a good idea to set out the forces in advance, along with a detailed TO&E (Table of Organisation and Equipment) to define what forces each player has and how they are organised.  Further, I'm going to list out all available support choices.  Naturally, these are already on the army list sheet, but since I don't have every possible choice ready to put on the table, I will make it simpler for the players and just let them know exactly what is available for them to choose from. 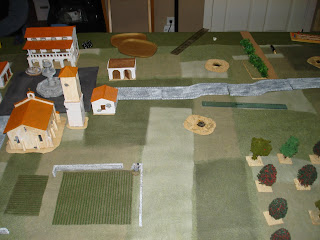 The shot above was taken after the patrol phase.  Naturally, I want to play the patrol phase many more times so I can get a better handle on its intricacies.  I am going to make some 'proper' jump off points (JOP) for both sides - in the photo above, Sgt Schultz is standing in as a German JOP.  And of course (just out of shot) Col Klink is another German JOP!

I didn't take any notes from this game, but came away more with a set of impressions, and a list of things I need to improve or obtain before the next game.

The patrol phase ended up with the German JOP in the corner of the field, in the tower and in a building at the back of the square.  Canadians had one JOP behind the bushes next to the road, in the back of the orchard and one more near their table edge.  The quick and dirty patrol markers I made a few weeks ago were dismissed out of hand as unsuitable, so I will make some that are more appropriate.  At least make sure they are not quite so dirty...

Here's a shot of the town.  You can see the Col Klink JOP on the roof of the small house, beside a tripod-mounted MMG. 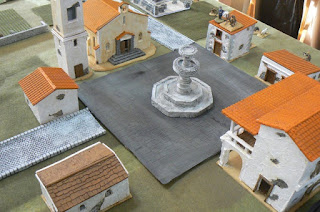 Here's a shot from early in the game.  Canadians are advancing through the orchard, and the Germans have deployed into the field to stop them.  Meanwhile, the Sherman tank trundles down the road. 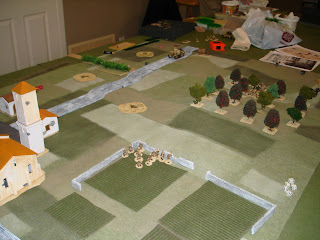 Once I'd committed the Canadians to attack on the left, the Germans deployed a second gruppe into the field.  At this point, with the Germans safely in hard cover, with 2 belt-fed LMG per squad, I should have figured out that I had insufficient forces to overcome the forces facing my side of the battlefield.  The Germans also had a gruppe in the church tower! Unfortunately for me, I'd committed two sections to the orchard, and was too slow to pull them back to find a better way forward. 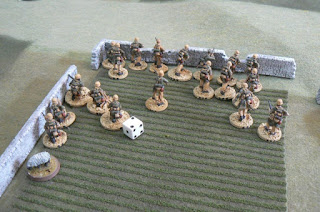 Meanwhile, I advanced the Sherman along the road whenever I got the chance.  Shooting HE from the tank gun was fun, especially when I found I could destabilise buildings.  Once again, though, I didn't concentrate enough on destroying one thing, but switched between targets. 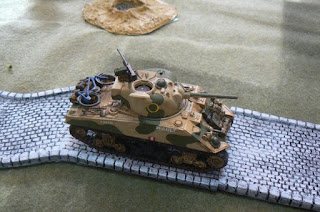 This was the only thing the Germans had with any chance of hurting the tank.  The armour penetration value (AP) of the recoilless rifle was not great, only 4 compared to the Sherman's 7 armour, so it was a long shot to have any effect.  Gord suggested it would be better to provide the Germans with a PAK 36 (mit stielgranate!).  I may see if I can find one, but I'll also make sure the Germans know that the 88mm Flak is available.  Probably worth the points, if they can position it well! 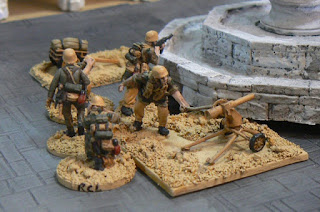 As with other games that I play, I like to use livestock for morale markers.  Here, the sheep and goats represent shock.  As you can see, there are 4 shock on the rifle team to the left, and 1 shock on the Bren team to the right.  Maybe I can be even more organised next time, and designate different animal types as shock for different teams, to help distinguish which shock is attached to which team. 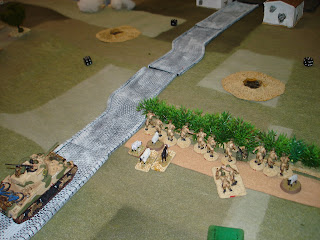 The Canadians ended up receiving a great deal of shock in this game, so I had to expand beyond my usual choice of sheep and goats.  After one of the sections was pretty much wiped out (the two figures visible are the section's corporal (junior leader or JL) and the platoon sergeant (senior leader or SL).  You can see that I needed to deploy not just sheep and goats, but also rats, dogs and mules! 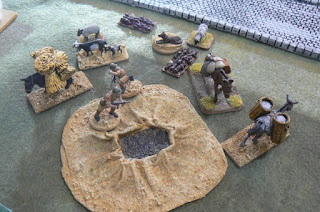 Photos are a bit out of order!  Here you can see the smoke screen that the Canadians laid down with the 2" mortar.  This particular game didn't see us rolling a lot of 5s, so it took a while to accumulate Chain of Command dice.  (Note to self, I need to get some appropriate CoC marker dice!).  Also, there were no 'natural' turn ends from rolling three 6s in any phase.  As a result, the smoke built up and lasted a long time.  We made a bit of an error in our interpretation of smoke - smoke from mortars should block line of sight, preventing firing through the smoke.  However, we played smoke as if it was from a hand-launched smoke grenade, which just provides a -1 on 'to hit' rolls.  So, despite the smoke, both sides were happily blasting away through it, on the theory that if you roll enough dice, you'll get hits!  The bases visible are each 3" long to show the extent of each smoke shell's effects.  Of course the smoke had no effect on the LMG in the tower as it maintained a clear LOS on the target. 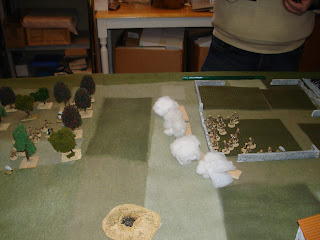 Here's a nice shot of the Sherman advancing along the road, as the recoilless rifle sets up to shoot. 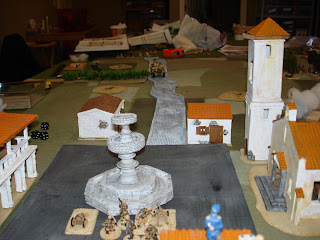 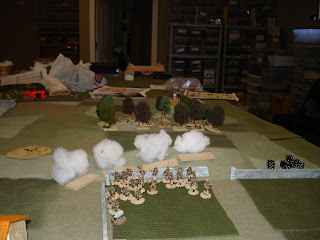 It was clear at a certain point that the Canadian attack was not going to succeed, but since this was a learning game, we played through to when the Canadian morale failed.  This was an interesting thing to do, as the Canucks started with high morale, and the Germans with low.  The Germans suffered a few 'Bad Things Happen' events, with one of the gruppe JLs being wounded, then killed.  The recoilless rifle was moved out into cover before it was wiped out as well.  These ran down the German morale, but then the Canucks really started to take hits from the concentrated LMG fire, which piled on the shock and casualties until they broke.

One of Doug's big challenges through the game was only having a single Senior Leader, while the Canadians had two SL.  Doug rolled lots of 4s on his command dice - but since he could only use one at a time, the extra 4s went to waste.  I of course found (as per the TFL design!) that combining the dice to make a 3 or a 4 was often more useful than using a 1 or a 2.  I can see in another game that the Germans might want to spend one of the support points on a second SL.

For the next little while, I will build up some more markers and various other game aids.  The Force Morale and CoC dice trackers that I made some time ago are good, but I will tweak them to make them better!  I will follow the same concept, but include a place to track the number of CoC dice.  As mentioned above, I need more markers, including smoke and suppressing fire.  JOPs as well.

For this particular scenario, I discussed with Doug after the game and we are going to count the wall around the field as soft cover (on the basis that it is an old, tumble down wall that doesn't provide as good cover as the stone houses!).  That will line up better with the plan from the PSC, where it is presented as a hedge.

Thanks again to Doug and Gord for a great game, and for supplying the photos!  Thanks to Gord for his guidance on the rules.  Looking forward to trying this again soon.
Posted by William Bailie at 22:52