And the man with the flak said "everyone attack!"

I must admit, this was mostly an impulse purchase.  However, the famous 88 mm flak gun shows up multiple times in the accounts I've read about Operation Husky, starting with the Hermann Goring Division's ambush at Grammichele.

So here it is, the Warlord Games/Bolt Action/Italeri Luftwaffe Field Division 8.8 cm Flak 37.

This is a List 7 option for the Germans in Chain of Command - so I don't expect it to be selected very often.  It will be similar putting all the eggs in one basket.  It's a very powerful gun, and will punch a hole in any tank, or demolish any infantry it can see. However, it's effectively immobile, at least within the scope of the game, so an opponent will likely find a way to counteract it by flanking it. 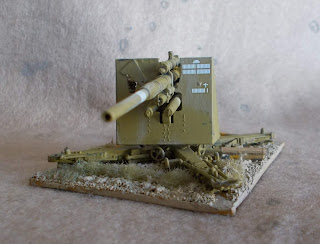 This model can rotate on its base. It's supposed to be able to elevate as well, but it turns out that was beyond my model-building skills! 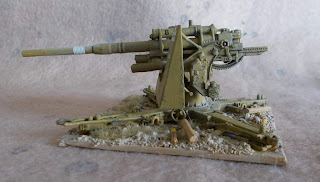 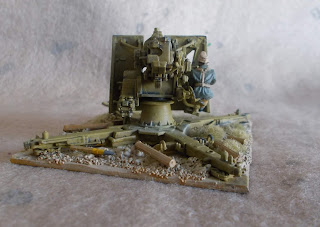 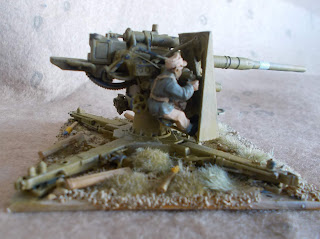 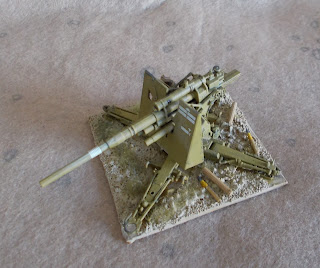 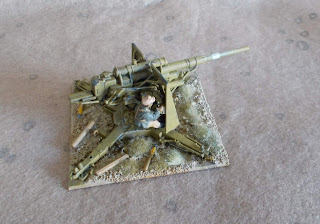 In game terms, the 88mm Flak has a crew of 10 (including the chap sitting in the firing seat).  The kit only came with 7 crewmen, so I made up the difference with three men from Perry Miniatures Afrika Korps.  The Perry men stand out, they are a bit slight compared to the Warlord figures.

This gun might never make it on the table, but it was a fun build!
Posted by William Bailie at 18:34