The first armed Afghans (insurgents? criminals?  local militia?  who knows?) are now making their appearance.  These are Eureka Miniatures figures.  I'm a big fan, they are wonderfully sculpted and cast and a joy to paint.  My only complaint is that about half of them are wearing the distinctive Pakul cap, as favoured by Tajiks such as Ahmad Shah Masooud, lion of the Panjshir, and made famous by the mujahadin who fought the Soviets in the 1980s.

However, it is almost never seen in the south, specifically the area around Kandahar that I want to recreate.  I've allowed a couple of figures to keep their pakul hats, but for others I've attempted two different strategies.  Some have had greenstuff turbans rather haphazardly wrapped around their heads, while others have suffered greater indignity as I removed their heads altogether and replaced them with heads liberated from Old Glory NWF Pathans.  Here are the results:

These chaps are the rank and file.  (as always, click on the photo for a close up!)  The chap who is kneeling has had a greenstuff turban added. 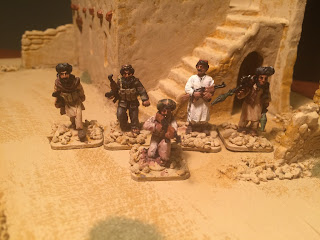 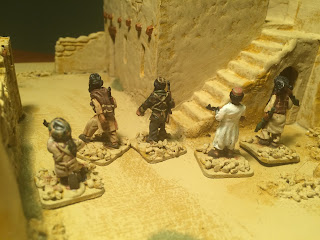 Here are a couple of commanders - I managed to get two of the same figure, a grizzled commander wearing a pakul hat.  The one on the left has had a turban added, the one on the right is a head swap.  I like the way it looks like the head-swapped commander is concentrating as he looks down; this was serendipity!  Worked out but just by luck.  A simple tilt of the head makes him look like a completely different figure. 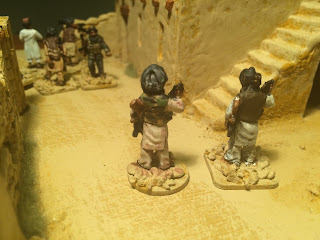 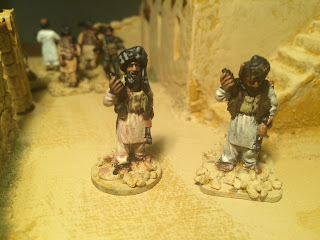 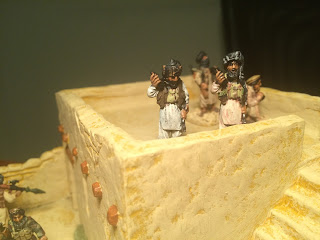 And finally, a couple of observers with binoculars. 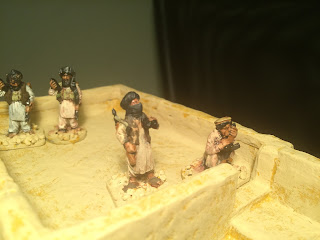