I recently scored on a figure exchange with another gamer.  I had some figures that were languishing in an abandoned project (my idea to do "something" for an 1870-ish game).  I shipped them off to Ontario in exchange for some Perry Sudan Brits (who will fit in quite nicely on the NW Frontier), and as a bonus I received these camels, a blast from the past which I immediately recognised as the old Ral Partha Brigands' Treasure Caravan.  (Thanks, Pete!)  So naturally I had to paint them up immediately.

The 'naked' camel will fit in nicely for my Afghanistan games (both modern and 1880).  I could have disguised the loads on the other two to make them generic, but nostalgia prevailed so here they are in their glory: 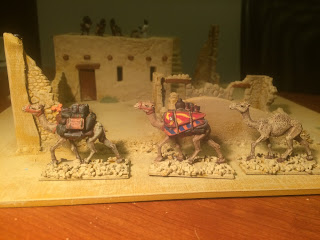 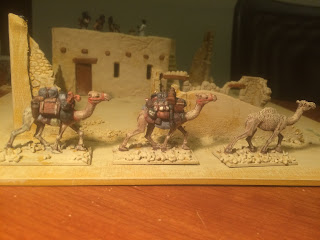