It's been over a year since I last had much to do with the Princely State of Jhamjar, but that's not from lack of interest on my part, but simply my own time management putting a greater emphasis on other projects such as the army of Peter the Great, and delving deeper into Afghanistan at the time of the Second Anglo-Afghan War.  One of the projects that has been patiently waiting for my attention has been preparing some dismounted cavalry so I can more accurately field my Brigade Games WWI Indian Cavalry in support of the Jhamjar Rifles.

One of the things that I was fretting about, and which ended up delaying my work on these models, was that I didn't think I'd get an exact match for the paint jobs on the cavalry that I'd painted around 10 years ago.  My 'liberation' moment came when I realised I had no particular need to get an exact match.  Once I decided not to worry about getting colours and paint style to match precisely, I was free to paint with my current style and with currently available paints (especially as I don't remember the exact paint recipe I'd used back when I painted the cavalry).

Finding the best figures to use for the dismounted cavalry took a bit of a search.  As far as I can tell, there are no 'dismounted WWI Indian Cavalry' figures currently available in 28mm.  However, the Over Open Sights blog  provided just the inspiration I needed to place an order with the Woodbine Design Group for a section of Indian infantry.

Following the ideas from the Over Open Sights blog (but at a much lower quality of execution!) I made some greenstuff turban tails to match those on the mounted figures.  I did NOT take the extra step of removing bayonets or entrenching tools, so these sowars are more than ready to function as infantry if called on! 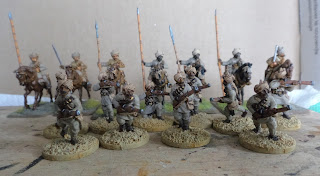 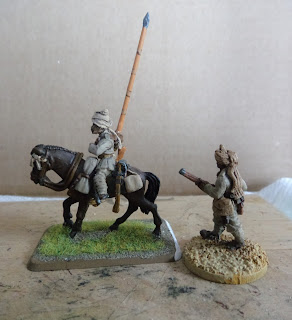 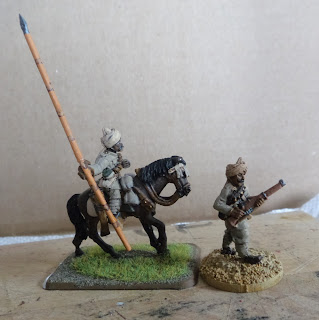 As I was placing an order with Woodbine anyway, I decided to expand the capabitlies of the Jhamjar Rifles.  I picked up some Hotchkiss light machine gun teams, as their absence had been noted when facing ANZAC infantry equipped with Lewis guns (although the lack of LMG had been more than offset by the Jhamjari Vickers gun). 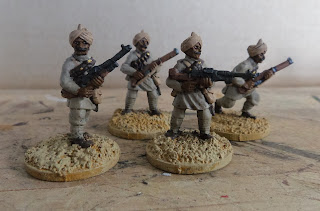 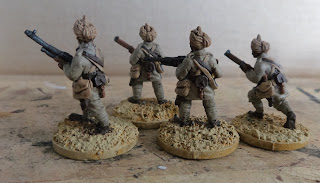 I also got them some bombers.  In game terms, not such a big deal as I could always just state that infantry had grenades, but on the tabletop it looks better to actually have someone actively demonstrating the use of ANY weapon that the roster sheet claims (WYSIWYG, after all!). 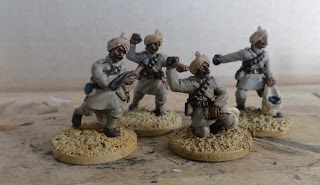 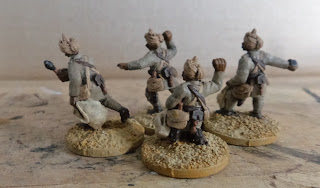