I've managed to accumulate a few new vehicle models for Op Husky, or possibly for later in the Italian Campaign.  In addition to the Panzer IV that I painted previously, the Germans now have a Panzer III, a Tiger I and a beutepanzer Stug M42 (more commonly known by its Italian name, Semovente da 75/18. 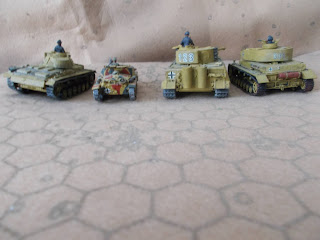 The Tiger is from Warlord Games: 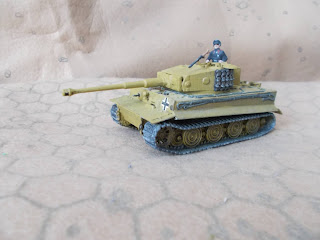 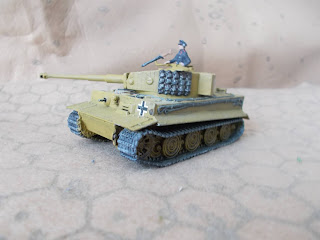 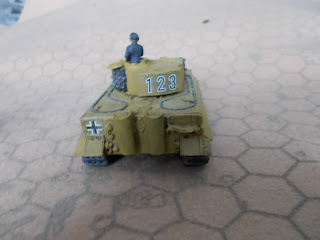 Here is the Panzer III.  As far as I can tell, German soldiers didn't name their tanks quite as regularly as Allied soldiers did, but I've decided to name my Panzers III and IV. 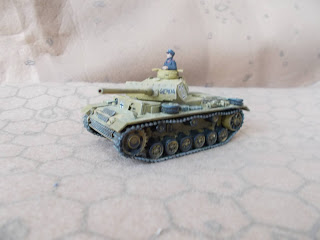 The M42 Stug was not used in Sicily by the Germans (although the Italians certainly had some) but once the Italians withdrew from the war in September 1943, the Wehrmacht appropriated any Italian vehicles that they could get their hands on. This model is from Warlord Games.  The kit can be built either as the M41/14 Medium Tank or as the Semovente da 75/18.  Unlike my usual boring plain dunkelgelb paint scheme, I attempted a fairly sloppy camouflage pattern based on this image from Tanks Encyclopedia: 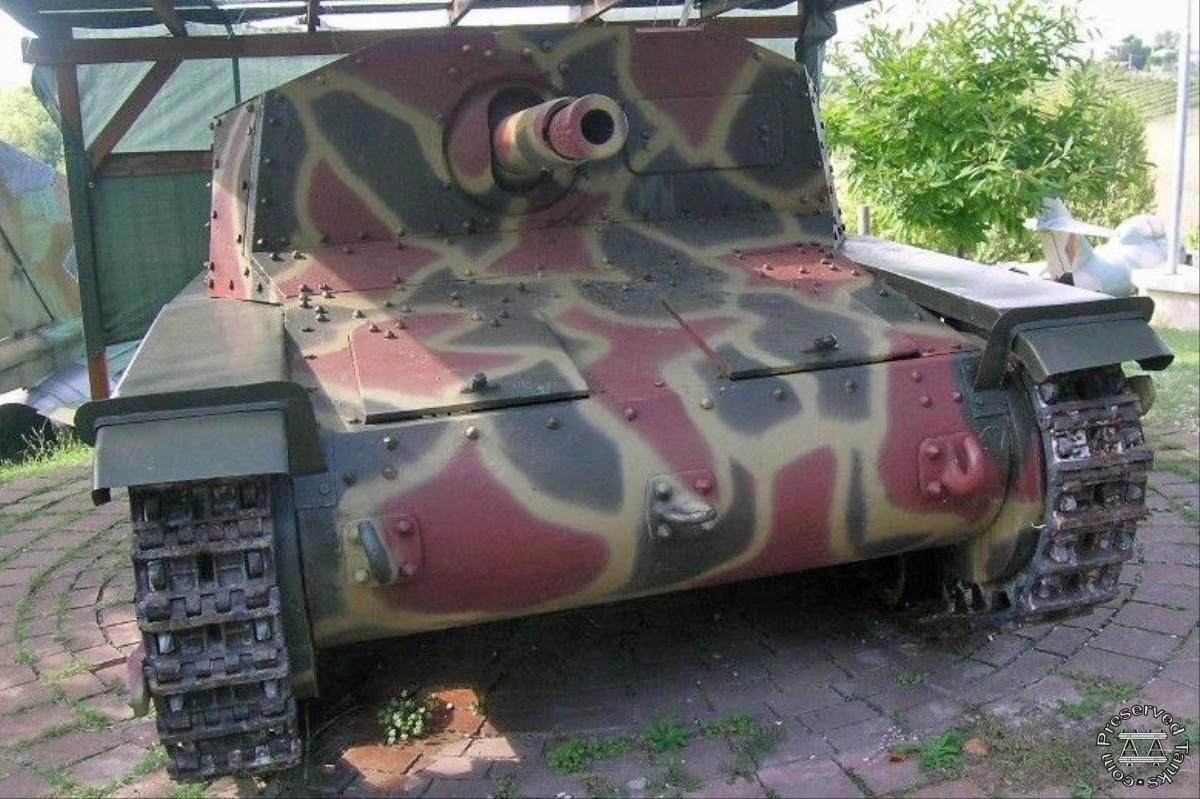 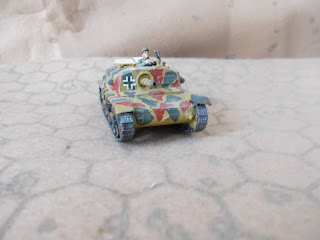 The above tanks are from left to right, Sherman V (M4A4), Sherman III (M4A2), Sherman I (M4) and Sherman V (M4A4).  I can barely tell the various marks apart, but I'm slowly learning!
Cyclops is a Sherman V, from Warlord Games.  As I was assembling the model, I realised that I didn't have as much stowage as I wanted, so I looked around for some other options.  Many WWII tankers welded spare track around their tanks to provide some extra protection from anti-tank (AT) weapons.

This was generally discouraged by the higher ups, but that never stopped the crews from doing whatever it took for them to at least feel safer!  In order to make my own extra track armour, I learnt how to make a press mould from modelling putty. 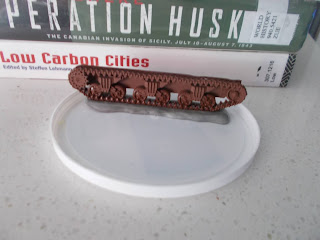 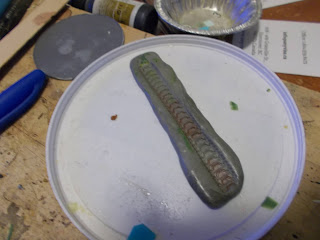 And here is how the press mould tracks look on the finished model.  This one is Cyclops, a Sherman V from Warlord Games. 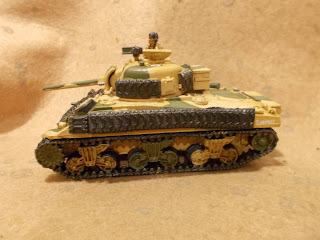 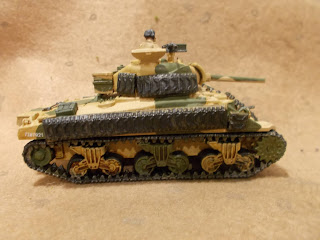 Chief is a Sherman I, from Rubicon. 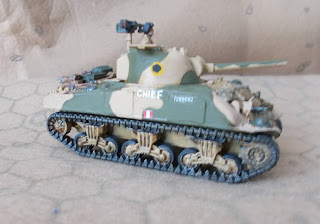 Corvette is a Rubicon Sherman V.  I assembled the 17-pdr turret as well as the regular 75 mm turret, so that there'd be an option to field Corvette as a Firefly version if I so choose.  Although theoretically the Firefly turret can fit on any of the 3 Rubicon tanks (Chief, Corvette or Cobault), I piled on so much stowage on the other two Shermans that the extended turret can't rotate properly! 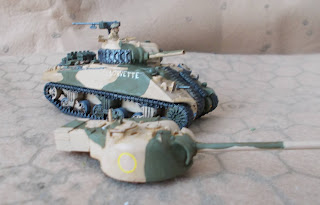 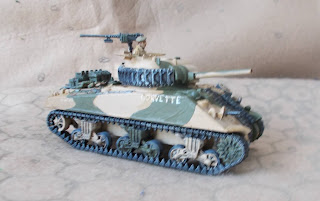 Chief is a Rubicon Sherman I. 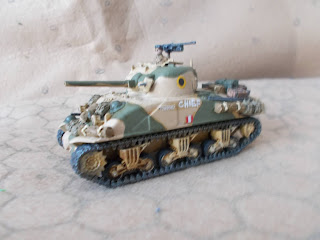 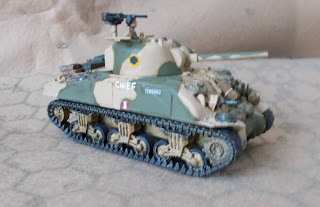 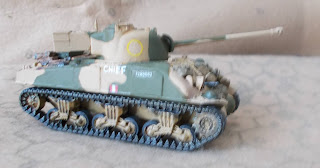 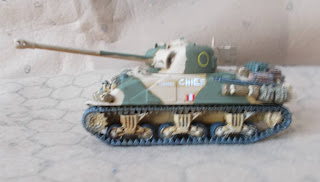 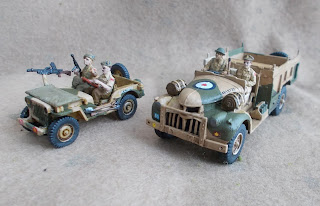 In addition, the Canadians also gained a couple of softskins. The jeep is straightforward, simply the Rubicon Models model.  However, I cheated a bit on the driver and passenger:  the crew figures that came with the model were American, but I did a couple of head swaps and painted them to match my Canuck infantry.  The white-on-red '56' insignia on the jeep shows that it belongs to the Hasty Ps, but I've given the crew tam-o-shanters (as i had a few in the bits box) so they are more likely to be Seaforths or 48th Highlanders than Plough Jockeys! 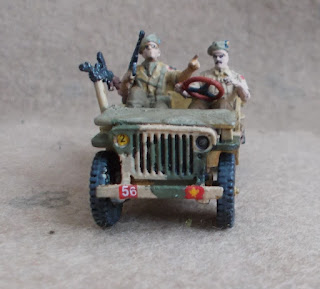 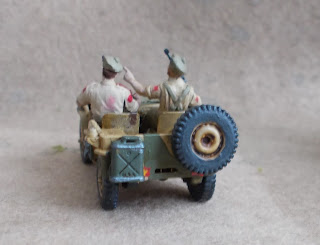 What's up with the pink stain on the driver's back?  I'd better cover that up... 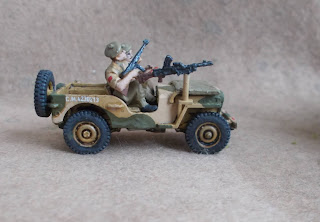 The Chevy 30 cwt MCP is most famous nowadays for being the transport of preference of the LRDG, however the reason it was available for use in desert raiding was that it was present in large numbers in the Mediterranean theatre.  While the story of the Canadian Military Pattern (CMP) trucks is pretty well know, with over half a million produced for the war effort, the Modified Conventional Pattern (MCP) trucks are now a bit obscure.  These were basically civilian trucks that were adopted for military use.  For my force, I simply took the Rubicon Models Chevrolet 1533x2 1.5-ton 4x2 truck, which is intended to represent the type in LRDG service, and simply painted it to match the other vehicles in my collection.
I kept the stripped down cab, as reinstating a covered cab would require modelling skillz beyond my meagre capacity.  Vehicle markings are for the 3rd Canadian Field Company, RCE, with the intent that this truck will be a support vehicle for my sappers.  That will also provide the justification for the stripped down cab - the engineers needed to get the truck into some tight space or other! 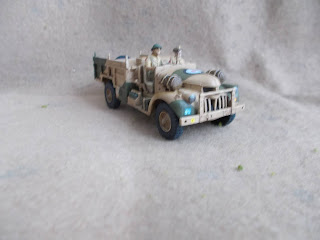 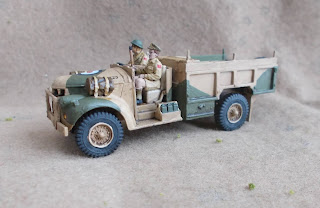 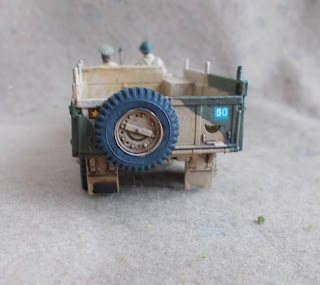 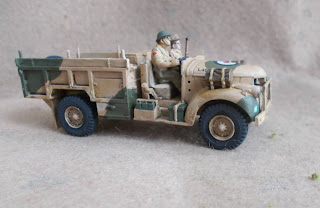 And here they are with the CMP 15 cwt that I already had. 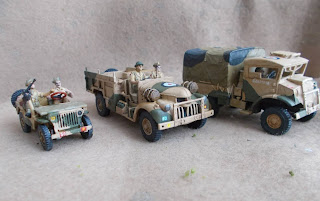