I've got my basic German force ready for action.  No doubt I'll gradually add a greater variety of support options, but I've now got enough to put them in a game, if I can ever make time for one!

The platoon (aka zug) has a small command team and three squads. 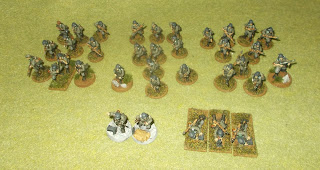 The command team consists of the officer (leutnant), senior NCO (feldwebel) and a three-man 5cm mortar team.  Senior leaders are on street-style bases so they easily stand out from the other soldiers. 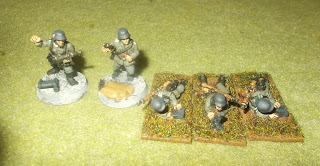 Each squad has 10 men, including the squad leader (obergefreiter/JL), a three-man MG34 team and a 6-man rifle team.  The JL is on a taller, 3D-sculpted base, the LMG team on 25mm bases and the rifle team on 20mm bases to help to easily tell them apart. 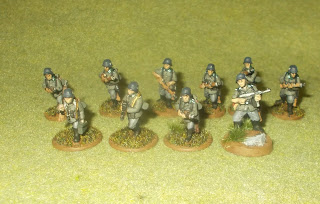 Second squad is mostly kneeling, as an additional visual aid! 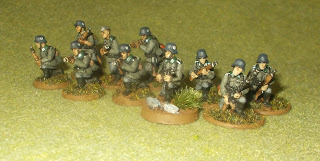 Many of the potential supports aren't necessarily Wehrmacht assets (like Shabby Nazi Tricks), or will not necessarily show up on the table (like pre-game bombardments).  I do however have a few supports ready to show up on the table.  These include the tripod-mounted MG34 (in a support role), the Pak36 anti-tank gun and the sIG 33 infantry gun, as well as a Leichter Panzerspähwagen (light armoured car, aka the SdKfz221), an Opel Blitz troop carrier truck and a collection of pioneers. 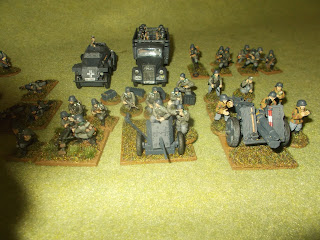 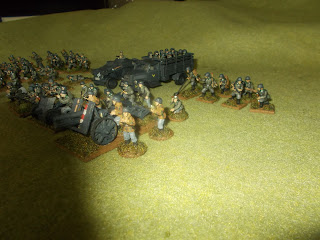 Not shown is my Panzer P38(t).
So, ready for action!  I may add a fourth squad to allow some more flexibility with the army lists:  'first wave' units apparently had four squads available.  I may also find some WWI-era MG08 machine guns to show the use of older weapons by some German units.  And of course I'll be on the lookout for more armour: can't have a Blitzkrieg German army without loads of Panzers!