The latest addition to the Indian Army are these troops from Perry Miniatures' Victoria's Little Wars line.

They are sold as Jacob's Rifles (aka 130th Baluchis of the Bombay Army), but I ended up basing my paint scheme on the 29th Baluchis.  Specifically, I looked at this print from Richard Simkin (1885): 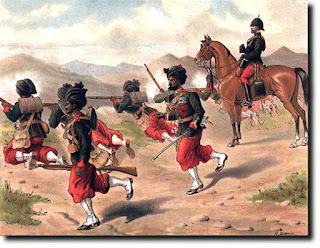 I was tempted to paint them with the black tunics as shown, but decided to go with a slightly speculative uniform with khaki tunics and red trousers, to keep them close in appearance to the soldiers that I've already completed.  I'll justify my choice based on my readings on the 2nd Anglo-Afghan War that indicated a preference for khaki for field troops, plus an absence of documentation to prove that my choice is wrong.  As near as I can tell, all the Baluch regiments favoured red trousers, so these troops could likely represent any Baluch sepoys in the Indian Army.  I'm pretty happy with how they turned out. 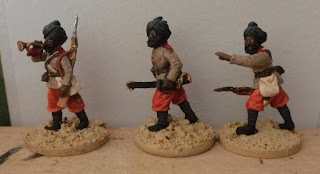 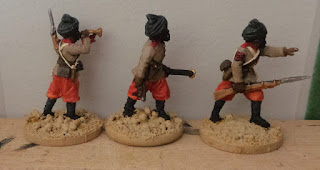