72nd Duke of Albany's Own Highlanders

Thanks to a generous donation of Perry Miniatures plastic British Infantry for the NWF, I've now got a contingent of the 72nd Regiment, Duke of Albany's Own Highlanders for the Second Anglo-Afghan War.  Shortly after the end of the war, the 72nd would be amalgamated with the 78th to become the Seaforth Highlanders, with kilts of the McKenzie tartan, but in 1880 they were still wearing trews of Prince Charles Edward Stuart tartan, which I've attempted to represent on these figures.

My research found depictions of the troops both with and without puttees.  Painting tartan is hard enough on a smooth surface, and the idea of painting it messed up by puttees gave me the heebee geebees, so I covered the puttees on the figures to give them trews.  The piper is metal, and has been waiting for years to be finished (he was originally intended to join my Gordons as a proto- Piper Findlater VC, even though the storming of the Heights of Dargai was not going to happen until 1897).  So instead he has been assigned to the 72nd. 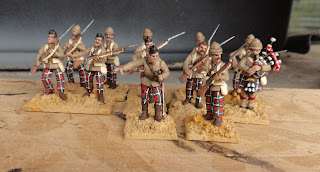