BSC2021 - Chain of Command on the new boards - Picture heavy

My new gaming terrain boards are ready for play, gaming mates and I are vaccinated, and it's finally time for my first game of Chain of Command in over a year!

The playing space is only 4' x 4', while the TFL literature generally points to a 4' x 6' playing space as being preferred.  But until I find the time and inclination to build two more boards to expand the playing space, we get to play on the smaller playing surface.  We picked the 'Attack and Defend' scenario, as it plays across the width of the table, rather than lengthwise, with the hope that the patrol phase will still more or less work out.

I invited Gord and Craig to join.  Both are veteran Chain of Command players, although neither had managed to play any CoC for over a year due to the pandemic.  Somehow, as we organised our forces, they both ended up on the same side so that I, a novice at CoC, managed to face off against a pair of veterans.  However they are both friendly and offered good advice through the game.

First up in the game was the patrol phase.  For this scenario, the defenders (Gord and Craig as the German PanzerGrenadiers), get to line up 4 patrol markers at a point 18" from their base edge.  This put them at the edge of the ravine - something I hadn't considered when assembling the terrain. 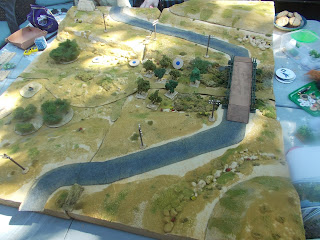 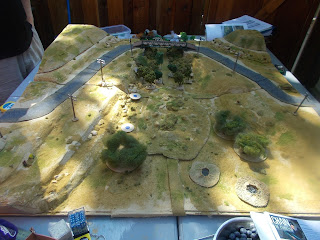 My Canadian patrol markers started on my table edge.  I rolled well and was able to move my markers 5 times before the Germans could react. 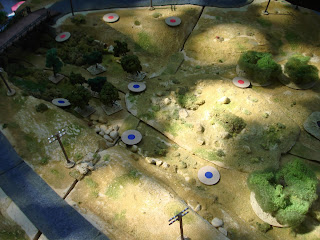 My markers moved forward, and the markers on both sides were soon locked down. 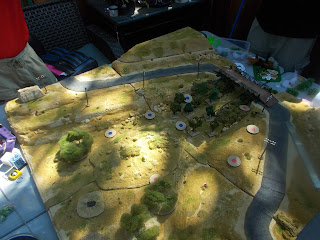 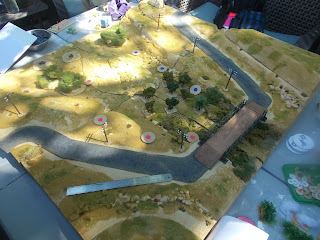 As it turned out, with cover available only in the ravine, most of the Jump Off Points were pushed back to the table edges.  I was fortunate, and managed to drop one JOP in the valley, isolated at the left side of the board, and another behind the bridge. 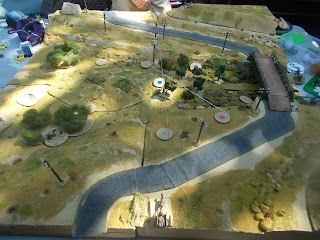 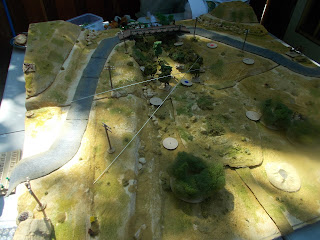 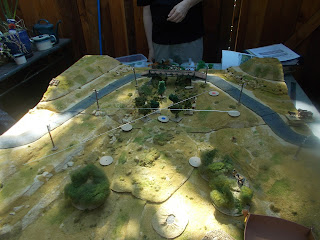 Craig and Gord used their support points to place a minefield on my end of the bridge, restricting both my ability to use the JOP at the end of the bridge, and also limiting the bridge to a narrow file.
My troops got to take the first action and deployed a section in the valley floor.  I got some lucky dice again, and with a double phase decided to push my section across the valley floor. 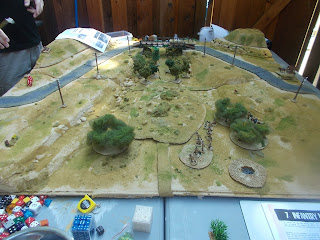 Reacting to the Canadian advance, the Germans deployed a squad in entrenchments to slow them down. 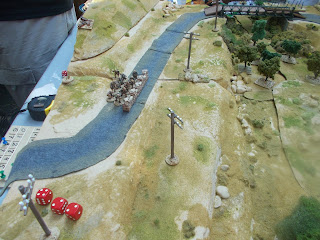 Now that there was a German squad on the table, I decided to bring my tank onto the table so I could start dropping some HE on them.  You can also see the smoke that my 2" mortar used to screen the German squad. 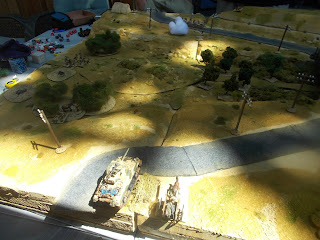 On the blurry right hand side of this photo, you can see the second Canadian section advancing onto the bridge, while the Sherman tank continues to shell the defending Germans. The view from the German trenches, as they open up on the Canadians in the small grove in front of them. 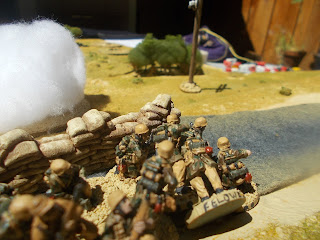 The Canadians take cover from the German machine guns in the grove, but are starting to take some punishment. 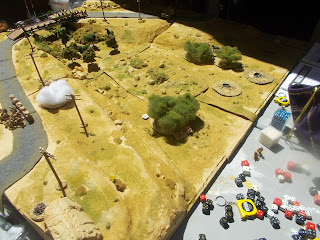 The Canadian rifles move to the toe of the slope, out of sight of the German PanzerGrenadiers. 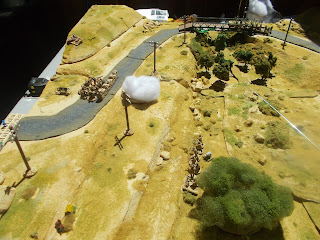 As their enemy on their right moves out of sight, the Germans turn their attention to the Canadians on the bridge. 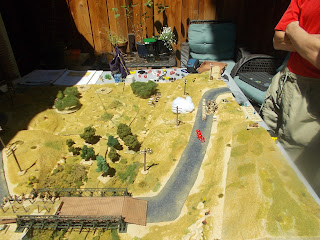 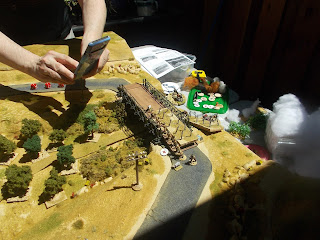 More smoke, the tan smoke is from a smoke grenade thrown by the Germans, slightly less effective than the white smoke from the 2" mortar. 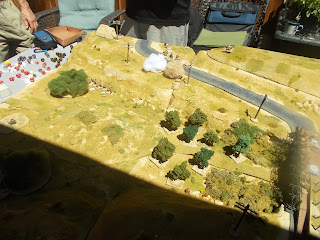 The Germans turned their attention on the Canadians on the bridge.  The livestock represent shock points:  the Canucks here are on the verge of breaking. 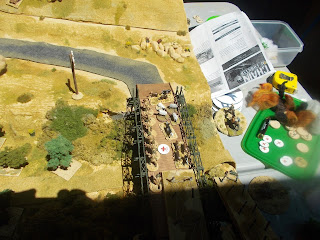 As the sun and shade progress across the table, photos end up a bit dodgy.  To the right, you can see the second German squad up high on the hill.  The Canadian section on the bridge has been broken but the Canadians have brought up another section on the left. 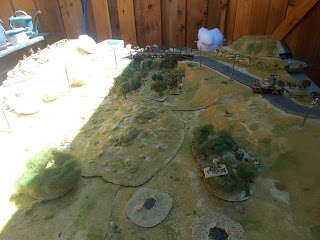 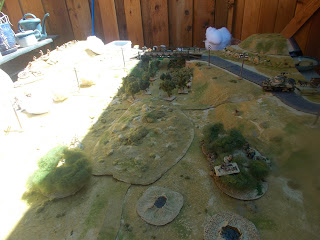 Here in the sun you can see the Germans, as well as the Canadians at the toe of the slope. 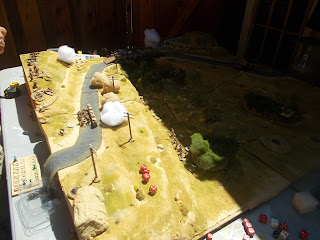 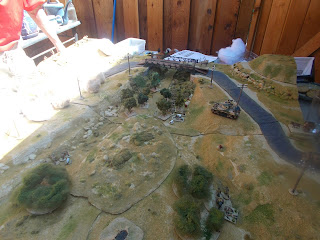 You can see the smoke all around the Germans to keep them blind. 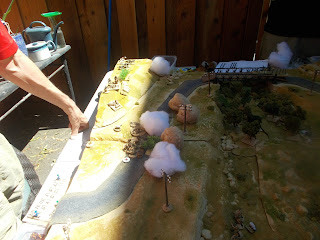 But then the turn ended, and all the smoke disappeared, allowing the Germans free shooting against the Canadians. 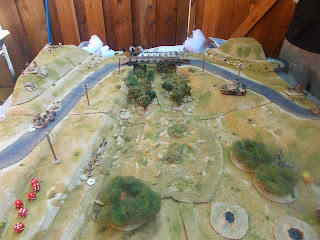 With their cover gone, the Canadian section on the left was shot up, and the Canadian force morale plummeted.  That ended up being the end of the game.

Post-game analysis.  Patrol phase went about as well as could be hoped.  For game play, I once again fell into my frequent mistake of attacking everywhere rather than concentrating my forces.

I was distracted by the JOP in the valley, which was not the best choice as it is isolated.  I could not move troops out of these woods due to all the open ground around.  Had I focused on the JOP near the bridge, I could have brought my troops across the valley (rather than attack across the open top of the bridge).  Also, once I lured the Germans to deploy on the table I could have kept hammering them with bombardment from the Sherman's 75 mm gun, while the infantry kept out of sight.  If I keep getting hammered in every game, I may eventually learn!