My Canadian forces for Operation Husky are sufficiently built up for now, so I can move on to work on other forces.  (for example, I need to add some German opposing forces to fight these Canucks!).  My original intent was to have just a single platoon of infantry, but as you can see, miniature megalomania set in and the force has grown.

The force is based around an infantry platoon.  I was inspired by Farley Mowat's memoir, And No Birds Sang as well as his WWII regimental history of the Hastings and Prince Edward Regiment, The Regiment.  While this platoon is inspired by the Hasty Pees, the only insignia that I added is the 1st Canadian Division's red patch, so these soldiers could represent any of the 9 battalions in the 1st Division.  I've added a 4th section to allow me to choose more soldiers as a support option. 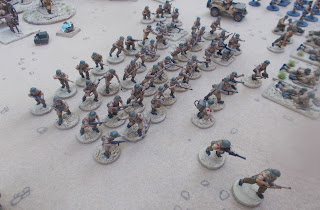 I have four different PIAT teams, even though I'm unlikely to ever take more than one. 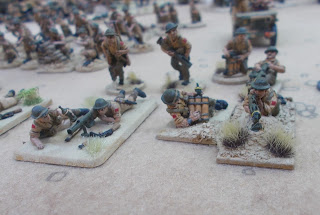 I have a recce section of the Princess Louise Dragoon Guards, consisting of 2 Otter LRC armoured cars and 2 universal carriers (with their dismounted Bren gun teams).  Also, another carrier with a .50 caliber MG! 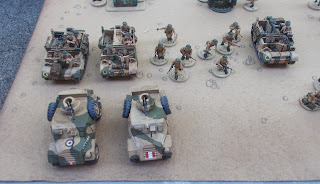 Some artillery pieces.  The 25-pounder is unlikely to appear in a CoC game, but could show up if I play a fantasy game like Bolt Action.  The 6-pdr anti-tank gun has seen action on the table, though! 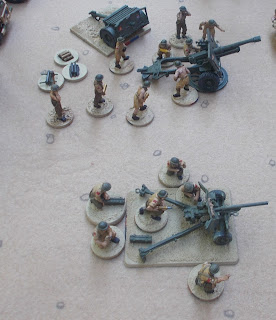 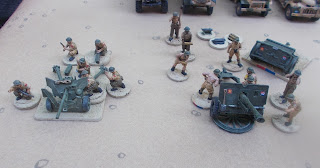 I don't see any game purpose for my Pipes and Drums, but as a piper, I'm just pleased to have them in my collection. 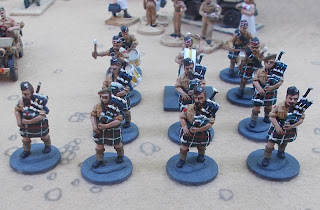 My medical section, with half a dozen nurses and an ambulance jeep. 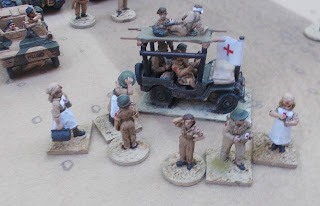 From the 1st Canadian Army Tank Brigade, which became the 1st Canadian Armoured Brigade in August 1943, I have tanks from C Squadron of the Three Rivers Regiment, as well as a Dingo from the HQ Squadron.  The motorbikes are available to carry messages around the force as needed. 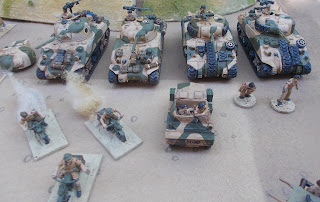 The army has a much bigger logistics section than most wargames armies.  In most wargames, the action starts after the forces have reached the table, so the details of how they got there are often unimportant.  Nonetheless, I can add a logistics element to my army, including both the lorries used on the roads as well as the mule-carried equipment that was able to carry supplies off road throughout Sicily and the Italian mainland. 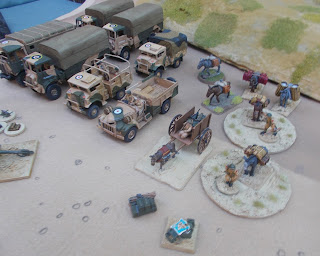 And finally, my sappers!  For starters, I have three teams that can be Engineer Teams for CoC.  The teams are a wire cutting team with wire cutters, a demolition team with Bangalore torpedoes and a mine clearing team, with a Polish mine detector and two sappers probing for mines with bayonets, plus an engineer officer to serve as the Engineer Section's leader. 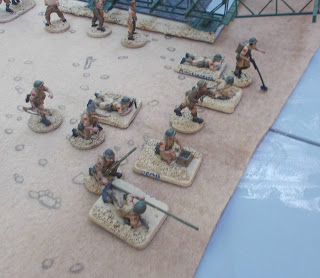 And the pride of my collection, my bridging platoon, with sappers building a Bailey bridge. 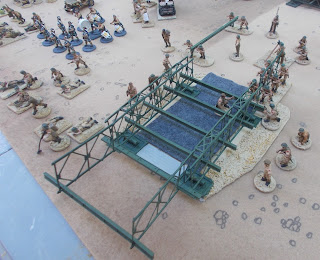 Next up, I'll have some photos of my BSC terrain with figures from a few different historical eras.
Posted by William Bailie at 11:48