If you're Canadian, show me your beaver!

This was a fun little project.  I've had this set of tiny beavers for years. I got them from the Honorable Lead Boiler Suit Company, but they are currently marketed by North Star.  I see that North Star has them in a set of 8, but I've only got 6 so it's likely that a couple of the beavers have disappeared sometime in the decade or so they've been banging around my lead mountain. 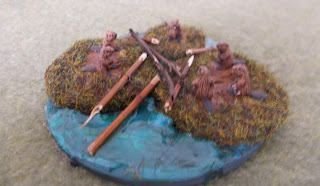 It's tough to take good photos, these beavers are so small it's hard to get proper focus on them with my simple little camera!

My original plan was to have the bases removable, so the beaver bases could be used as markers of some sort, but that ended up being too much of a hassle.  So the ground the beavers are on ended up looking a bit unrealistically round. 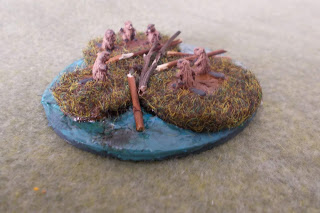 This is also the first time I've used water effects.  I used Vallejo Water Effects.  The water itself is clear, just applied over a green-blue base.  Although I mixed in some static grass.


I've no plans to use this in any game, it was just a fun little model making exercise.  I like the Vallejo water stuff, so I'll be looking for an excuse to add water to a future exercise.  Hmm, maybe Ukrainian wetlands for Eastern front?
Posted by William Bailie at 16:37